Law360 (November 18, 2020, 11:29 AM EST) -- A D.C. federal judge on Wednesday halted the Trump administration's policy to expel unaccompanied migrant children from the U.S. border under a public health directive aimed at controlling the spread of COVID-19. 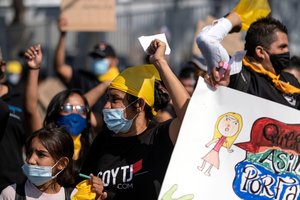 Adopting the reasoning of a federal magistrate judge, U.S. District Judge Emmet Sullivan provisionally certified a class of unaccompanied migrant children who are or will be detained and subjected to the border expulsion policy, which was issued by the Centers for Disease Control and Prevention through a rarely used public health law known as Title 42.

"Expelling persons, as a matter of ordinary language, is entirely different from interrupting, intercepting, or halting the process of introduction," Judge Sullivan wrote in his 50-page opinion.

The ruling puts an end to a policy that has allowed the U.S. Department of Homeland Security to expel thousands of foreign citizens, including asylum-seekers and children travelling alone, back to their home countries without any legal process since March.

The ruling also delivers a win to the American Civil Liberties Union, which had lodged a class action in August claiming that the government's practice of holding migrant children who seek protection in the U.S. in unlicensed facilities before quickly expelling them without processing their asylum claims violated federal immigration laws and put children in danger.

The ACLU had also questioned the public health rationale behind the policy, saying in its lawsuit that only children who test negative for COVID-19 are expelled, while children who test positive for the illness are quarantined in the U.S.

According to ACLU attorney Lee Gelernt, more than 13,000 children have been rapidly expelled from the U.S. under the policy.

"Today's ruling is a critical step in halting the Trump administration's unprecedented and illegal attempt to expel children under the thin guise of public health," he said in a statement Wednesday.

It marks the second victory for the ACLU in challenging the expulsion policy. In the first legal challenge to the expulsion policy as a whole, the ACLU successfully convinced a different D.C. federal judge in June to shield a Honduran teenager from expulsion under the policy, with the judge finding that the CDC order didn't comport with other immigration protections enshrined for minors.

The instant case, filed two months after that victory, was brought on behalf of a Guatemalan teenager, referred to by his initial P.J.E.S, who had sought protection in the U.S., where his father already lived. He was initially detained in Texas under the directive, but the government later exempted him from the expulsion policy after the lawsuit was filed.

U.S. Magistrate Judge G. Michael Harvey had sided with the ACLU in September, finding that the administration had misinterpreted the statute allowing the government to bar the "introduction" of foreign citizens into the U.S. to prevent disease.

"The government stretches the syntax of that clause well past its breaking point," Judge Harvey wrote in his recommendation.

He reasoned that "introduction" applies to those who have not yet entered the U.S., and would not permit expulsions — a term he noted does not appear in the statute. When Congress has chosen to expel individuals from the U.S., it has done so "plainly," the judge continued, pointing to the language of the Chinese Exclusion Act of the late 19th century, which targeted immigration from China.

The federal government, however, had urged Judge Sullivan to reject the magistrate judge's findings, claiming that such a ruling by the court would "all but strip the government's authority" to manage the COVID-19 outbreak and declaw the statute.

Chase Jennings, a spokesperson for DHS, said in a statement late Wednesday that the department is "exploring all options to ensure this vital public health tool is quickly reinstated and that Americans are not prevented from receiving services at their own hospitals."

"Though Americans have drastically changed their lives to abide by state and local lockdown orders, forgoing traveling short distances and seeing loved ones for months, today an activist judge has demanded that illegal aliens be introduced into the United States in the tens of thousands," he said. "Today's dangerous decision is the propagation of one judge's agenda thousands of miles away from the border, in the face of science and the law, with total disregard for the health of those whose lives will be affected."

The federal government is represented by Jean Lin, Kevin Snell and Tanya Senanayake of the DOJ's Civil Division.

Update: This story has been updated with additional background information and with comments from DHS and counsel for the children.