For weeks after Hurricane Maria, José Ramírez-Coll faced a ruthless climb. Each day, he trudged up 10 floors just to get to his law firm's office. Up and down, step after step. Concrete buildings trapped heat, and it had to be almost 90 degrees.

But there was hardly a choice. In an instant, Hurricane Maria had set the clock back decades by snuffing out power and communications across the island, hitting rural and mountainous areas the hardest. It would be weeks before power returned to Ramírez's office, and even longer before anyone could count on it.

These days, the elevator is working and the phones are ringing again at Antonetti Montalvo & Ramírez-Coll, a San Juan litigation boutique. The computers are back in their usual spots after being tucked away in the filing room during the storm to keep them safe from any shattering windows.

But it's not exactly business as usual.

"It depends on how we define normal in Puerto Rico nowadays," said Ramírez, who until October was also the president of the Puerto Rico chapter of the Federal Bar Association. "I think the corporate legal community has taken a big blow in Puerto Rico as a result of the lack of economic movement in general since 2006, and now compounded by Hurricane Maria."

An escalating budget crisis that culminated in a historic bankruptcy has shrunk the economy by about $16 billion since 2005, according to the Puerto Rico government's latest fiscal report in October. The storm made everything worse.

For the island's thousands of attorneys, their choices were stark: either close up shop and leave, or, if they could, hang on with lifelines they extended one another. 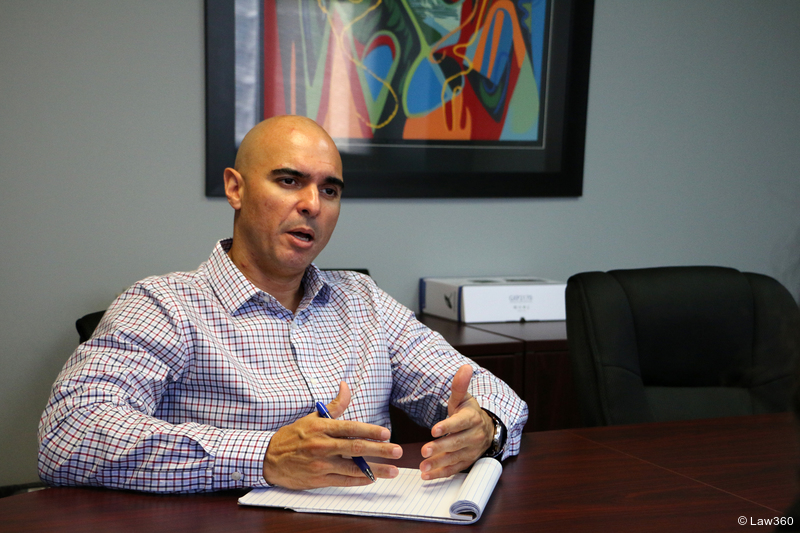 José Ramírez-Coll, the former president of the Puerto Rico chapter of the Federal Bar Association, described life after Hurricane Maria in an interview with Law360 in October. (Annie Pancak | Law360)

For some lawyers, that meant opening their doors to opposing counsel as well as court stenographers and translators in the weeks and months that followed. Others transformed their offices into home base for clients who lost electricity and needed a way to run payroll for employees.

"There was a sense that we needed to get the legal process up and running on our own," said Mariela Rexach, capital member at Schuster Aguiló LLC, an employment boutique in San Juan's Hato Rey district, which joined with Littler Mendelson PC in 2014.

From a distance, you could be fooled into thinking things are fine now, 17 months after the Category 4 hurricane made landfall. If you scan the San Juan skyline, you'll see law firms, banks and other concrete office buildings rise up around the Roosevelt and Hato Rey commuter train stations. Look a little closer, and you'll see a few missing letters in the names on their facades and other properties with paint peeling off.

Juan Felipe Santos, the managing principal of employment firm Jackson Lewis PC's San Juan outpost, tries to leave the office when it's still light out. That way, he won't have to drive home in the dark. Many streetlights are still out in the neighboring city of Guaynabo, where he lives.

The challenges in Puerto Rico are daily and real, but so are the opportunities. With $1.5 billion in federal block grants finally on the way, the commonwealth is poised for a massive transformation, and law firms are likely to play a significant role in shaping the island's future. 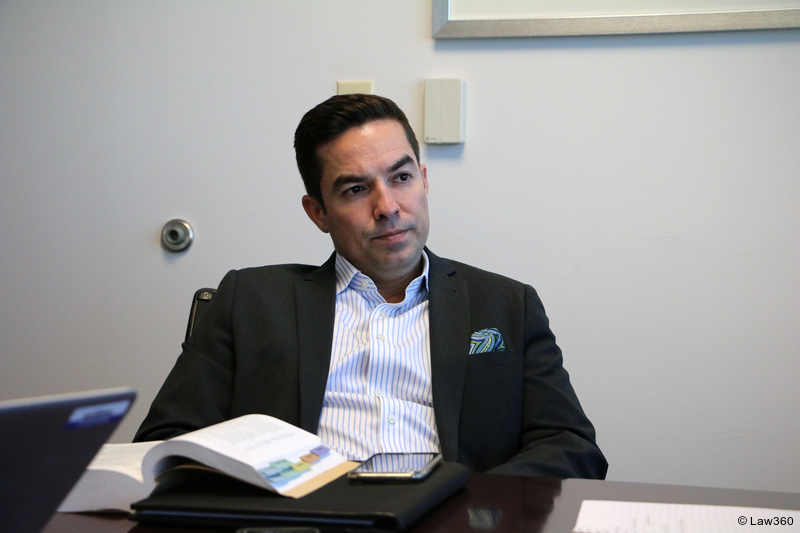 Juan Felipe Santos, the managing principal of employment firm Jackson Lewis PC's San Juan office, told Law360 he tries to leave the office when it's still light out to avoid roads where streetlights are out. (Annie Pancak | Law360)

Besides Littler Mendelson and Jackson Lewis, which opened its office in 2013 and has a half-dozen attorneys there, Puerto Rico's legal community boasts other familiar names. DLA Piper opened in historic Old San Juan as a corporate and tax boutique in 2016 and expanded recently with an employment partner and senior litigation associate it brought on last fall. In July, D.C.-based insurance boutique Weisbrod Matteis & Copley opened an office in San Juan with plans to represent policyholders in insurance suits arising from Puerto Rico's hurricanes.

BigLaw's traditional players also have local competitors on the island. McConnell Valdés LLC, for example, is Puerto Rico's oldest and largest corporate law firm and has more than 100 attorneys. The firm has positioned itself to take a lead role guiding clients who will bid on the disbursement of an unprecedented $20 billion in disaster recovery funding from the U.S. Department of Housing and Urban Development's grant program, known as CDBG-DR.

After the funding was announced last year, the firm created a new recovery financing practice team with over a half-dozen lawyers, aiming to be the go-to shop for private companies hoping to win lucrative housing and other rebuilding projects the program will fund. The time is now ripe. On Feb. 2, Puerto Rico Gov. Ricardo Rosselló announced that HUD had greenlighted the first $1.5 billion disbursement, and McConnell is ready to step in.

"It is very complex, and ushering those funds through the system here is not going to be as easy as people think," said Marcos Rodríguez-Ema, a capital member of McConnell Valdés' corporate and recovery finance teams and former chief of staff for Gov. Luis Fortuño. "So we thought that, you know, we had to be in the middle of those massive programs." 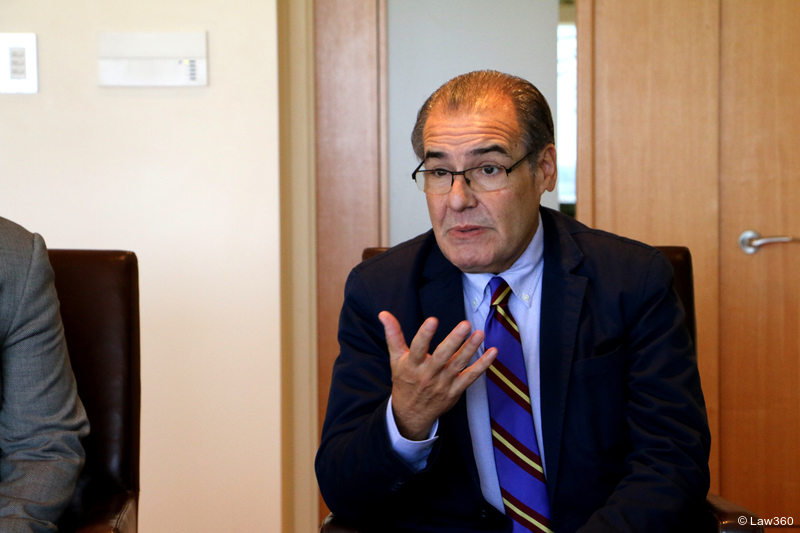 Marcos Rodríguez-Ema is a capital member at McConnell Valdés LLC and a member of the firm's recovery financing practice team, which is poised to advise clients who will bid on CDBG-DR disaster recovery projects. (Annie Pancak | Law360)

Lawyers are also in the middle of the debate over how to upgrade the island's precarious power grid. The grid is the only one that distributes electricity across Puerto Rico, leaving the whole island particularly vulnerable.

The Puerto Rico Electric Power Authority owns the grid, which was saddled with more than $9 billion in debt even before the island's infrastructure took a physical beating from Maria. Duke Energy Corp., Exelon Corp. PSEG Services Corp. and a consortium of three other companies are competing for the chance at a public-private partnership to operate PREPA's grid, with all of them looking to firms to advance their cause.

But it's not just big clients in need of legal help. Changes to workplace policy and benefits under the commonwealth's labor reform legislation, known as the Labor Transformation and Flexibility Act, are also creating a steady stream of assignments for employment attorneys from companies of all sizes.

Passed in 2017, the measure sought to make the island more attractive to employers and touched on nearly every aspect of labor law in Puerto Rico, including overtime pay requirements, probationary periods and even local mandates around "just cause." But in the hurricane's aftermath, many companies hit pause on implementing the complicated requirements, picking it back up again over the last year.

"For several months after the passage of this law, we had multiple discussions with our clients regarding how particular areas of the law applied to their industry, and how they had to make changes to achieve compliance," said Lourdes Hernández-Venegas, capital member of Schuster Aguiló. "We're still having many of these debates even now, precisely because the hurricane stopped everything in its tracks." 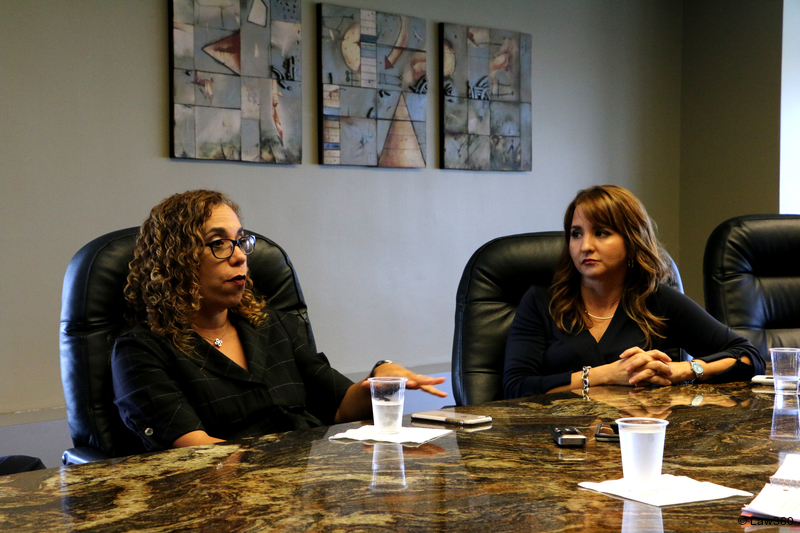 While corporate law firms are busy, some of Puerto Rico's smaller firms haven't fared as well.

Carlos Mondriguez, an employee-side attorney who runs a small corporate law practice in the elevated town of Las Piedras about 30 miles southeast of San Juan, has been playing catch-up since Hurricane Maria ripped away the 600-gallon water tank from his office building.

Stuck without electricity for months, Mondriguez worked out of a client's temporary office at a community hospital building in the neighboring town of Yabucoa. For two months after the storm, he drove between the two towns, hauling his computer and a printer back and forth in his car, so they wouldn't get stolen overnight.

"Everybody believes that lawyers had the best circumstances in Puerto Rico [after the hurricane], but that is not true," Mondriguez said.

Many of his small law counterparts have left since then, he said, and he believes he may be among the last ones standing in Las Piedras. Even attorneys in San Juan feel the absence of their harder-hit counterparts.

"I have at least three cases where the opposing counsel has moved to the states and either has assigned the case to a colleague or is winding down business here in Puerto Rico, and relocated to Florida after the hurricane," Ramírez of Antonetti Montalvo said.

Exactly how many attorneys left Puerto Rico in the wake of Hurricane Maria is difficult to pinpoint. The number of people on law office payrolls dropped by almost 10 percent in the month after the hurricane, from 4,610 in September 2017 to 4,170 in October 2017, according to data from the U.S. Bureau of Labor Statistics. The most recent figures available, from June 2018, show the employment levels have yet to recover.

But those figures don't take into account the vast swath of attorneys on the island who are solo practitioners and were particularly vulnerable to the devastation of the hurricane. The Puerto Rico Supreme Court puts the total number of active resident attorneys at 13,923 for 2018, only slightly less than 14,008 attorneys the year before.

When the hurricane hit, Schuster Aguiló's Hernandez was working on multiple cases at the pre-trial stage. Not only did that type of work come to a standstill for months while courts rallied to reopen and plaintiffs-side counsel struggled to stay aloft, but it took time to fully resume even after courts reopened.

"You still had [those] attorneys who would file motions in court saying, 'I'm still not ready, I still don't have connectivity, I still don't have electricity and I'm not doing a full workload,'" she said. "At least in our line of work, we're talking usually about solo practitioners representing employees. It's not big firms representing employees, so their resources tend to be more limited."

Businesses that have wound down or downscaled since the hurricane have meant shrinking revenues for many attorneys, with their fates often intertwined.

For attorneys who had the option to remain on the island, the decision has some poignance. For many, it is still home. It is where they are licensed to practice and where they have built their contacts and books of business.

Now, with the island in difficult economic straits, it is also where these attorneys feel they can exercise their vision for its future.

"Although there's a lot of migration back and forth between Puerto Rico and the states, as you know, I think a lot of people do want to stay in the place where they live and where they were born, and a lot of them are trying to make a difference," said Nikos Buxeda, the managing partner of DLA Piper's San Juan office. "I do think that lawyers at all stages of their career feel that there is an important role for attorneys to play in Puerto Rico in the reconstruction of the island."

Sindhu Sundar is a features reporter for Law360. She last wrote about how the Puerto Rico courts recovered from Hurricane Maria. Follow her on Twitter. Photos by Annie Pancak. Editing by Anne Urda, Jocelyn Allison and Sarah Golin.