Law360 (November 4, 2020, 4:45 AM EST) -- President Donald Trump vowed early Wednesday to challenge the results of the presidential election at the U.S. Supreme Court, slamming the election as a "fraud" and an "embarrassment to our country" even as ballots in key battleground states remained uncounted. 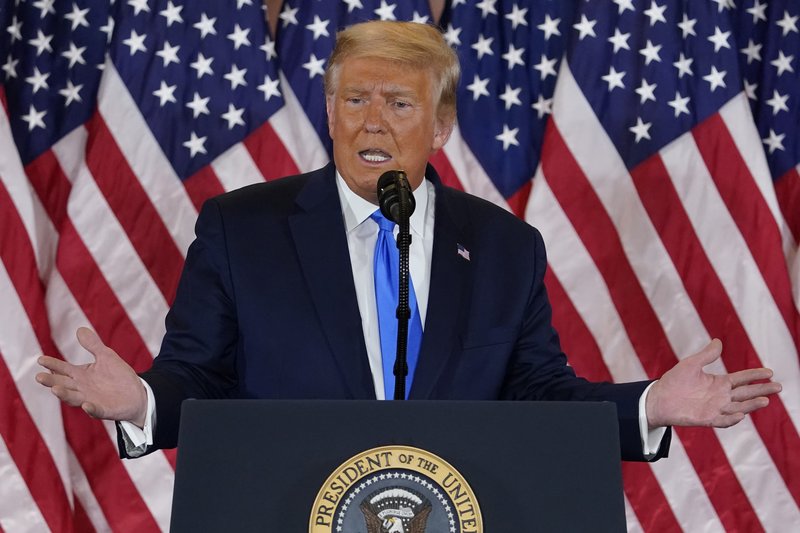 "This is a fraud on the American public. This is an embarrassment to our country," Trump said from the White House around 2:30 a.m. "We'll be going to the U.S. Supreme Court. We want all voting to stop. We don't want them to find any ballots at 4 o'clock in the morning and add them to the list. It's a very sad moment."

"The counting will not stop. It will continue until every duly cast vote is counted. Because that is what our laws — the laws that protect every Americans' constitutional right to vote — require," she said.

Speaking approximately two hours before Trump, Biden urged his supporters to be patient until all votes are counted and expressed confidence about his chances.

The president also tweeted that Democrats were "trying to steal" the election, referencing efforts — which Republicans fought in court — to count mail-in ballots that were postmarked on-time but arrive later than the 3rd.

The Trump campaign has attempted to paint the election, which has seen increased numbers of mail-in votes due to the coronavirus pandemic, as a fraud in the days and weeks leading up to Election Day. On a press call with reporters on Tuesday evening, Trump campaign adviser Jason Miller claimed that Democrats are trying to "claw back" more votes after Election Day.

"Now obviously we want everyone who's followed the rules and voted legally on time by Election Day to have their vote counted. That's what democracy is all about," Miller said. "What we oppose are people who send in their ballots after Election Day, or people who send it with no postmarks so we don't know when it came in, or who fill out their ballots in some kind of incorrect or misleading way."

Speaking on CNN after Trump's early morning speech, longtime Republican election lawyer Ben Ginsberg said that the president's statement is "not only unprecedented, and not only lacks any basis in the law," but is also "a disservice to all the other men and women on the ballot."

As dawn approached on Wednesday, ballots were still being counted in key swing states, including Wisconsin, Michigan and Pennsylvania.

Contested results would likely drive litigation, pulling in top attorneys from Big Law firms like Jones Day and Perkins Coie LLP and paving the way for the results of this election to potentially land at the U.S. Supreme Court. The last time the high court had to resolve disputed election counts was in Bush v. Gore in 2000.

However, election law experts predict that while post-election litigation may be inevitable, a repeat of Bush v. Gore

at the high court is still a long shot, with the final outcome more likely coming down to election officials counting ballots.

Even before Election Day, Trump had already vowed to contest the election results in Pennsylvania, a tossup state that has allowed ballots to arrive by Nov. 6 as long as they are postmarked Nov. 3 or earlier.

"We're going to go in the night of — as soon as that election is over, we're going in with our lawyers," Trump told reporters on Sunday about the state.

If results are tight, it could trigger a recount in the state, which is still counting mail-in votes. Pennsylvania state law mandates a recount if a candidate in a statewide race loses by less than half a percent.

The debate over mail-in voting has already played out in the courts in key battleground states, where Republicans have sought — largely unsuccessfully — to curb expanded voting initiatives.

In late October, the Supreme Court — without input from Trump's newest appointee, Justice Amy Coney Barrett — refused Republican-backed efforts to prevent mail-in votes that arrive after Election Day from being counted in Pennsylvania and North Carolina, which allows ballots to be counted as late as Nov. 12. However, conservatives on the high court indicated that the issue could be revisited after Election Day.

Republicans in Texas also lost their bid to throw out votes made at drive-by sites in Harris County, which includes Houston.

Following an emergency hearing on Monday, the day before the election, U.S. District Judge Andrew Hanen ruled that those curbside ballots must be counted, a decision the Fifth Circuit let stand late that night. However, the county nonetheless closed most of its drive-by voting locations in response to the litigation.

Meanwhile, the U.S. Postal Service has faced legal challenges to its alleged operational changes that have slowed processing and delivery times for mail-in ballots, which litigants have attributed to staffing and equipment shortages. The Trump administration, however, has maintained that the delays are due to the COVID-19 pandemic.

Federal judges in D.C., Washington state and Pennsylvania ordered the Postal Service to halt those changes, while a federal judge in Florida ordered USPS on Monday to undertake "extraordinary measures" to ensure that mail-in ballots are delivered to county supervisors by Tuesday evening.

On Election Day, a D.C. federal judge ordered postal inspectors to sweep facilities in more than a dozen places around the country, including in battleground states like Pennsylvania, for any remaining ballots and to "immediately" deliver them.

Hours after that order, however, the government said in a court filing that it would be "impractical" for inspectors to conduct such a sweep by the judge's afternoon deadline and "would take them away from their other pressing election mail related responsibilities." The judge responded that he "understands" that inspectors may not be able to supervise those sweeps until later in the day.

Trump's promise to go to court didn't come as a surprise to many of his critics, after the president repeatedly made statements in the weeks leading up to the election attempting to undermine the validity of mail-in ballots.

During the first presidential debate in September, Trump claimed that the Postal Service would not be equipped to handle all of the mail-in ballots. From the debate stage in Cleveland, he also urged his supporters "to go in to the polls and watch very carefully," raising concerns of voter intimidation.

In response to questions from reporters in the weeks before the election, Trump declined to commit to a peaceful transfer of power if he loses.

"We will win this, and as far as I'm concerned, we already have won it," he said.