Law360 (August 7, 2020, 2:28 PM EDT) -- The New York Office of Court Administration on Friday said that a pause on evictions and most related proceedings remains in place, perpetuating an uneasy status quo for tenants, landlords and their attorneys. 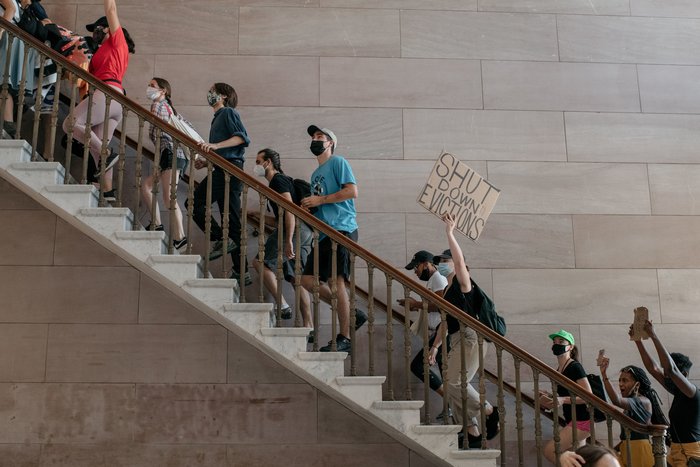 Tenants mounted three days of protest in Brooklyn this week, ahead of the latest guidance on eviction cases. (Scott Heins)

In a statement to Law360, courts spokesperson Lucian Chalfen said that a stay on evictions remains in effect until further notice, citing a March administrative order from Chief Judge Lawrence K. Marks that suspended "eviction proceedings and pending eviction orders" in light of the coronavirus pandemic.

"A stay on evictions has been in effect through an administrative order signed by the chief administrative judge since March 16," Chalfen told Law360. "It continues to be in effect. Should there be a change in status, you will be alerted."

In a June memo, even as courts began accepting new eviction filings, Judge Marks announced that evictions would not be executed and new cases would not proceed, to avoid a "sudden high-volume influx of eviction matters."

Marks' memo pegged the continuation of his eviction suspension to an executive order from Gov. Andrew Cuomo that suspends statutory filing deadlines and comes up for renewal monthly.

Wednesday marked Cuomo's latest such renewal — through Sept. 4 — and the third time since June that New Yorkers braced for an update from the courts.

"Cuomo's order gives permission for the courts to maintain a pause on eviction cases moving forward, but he's not requiring them to," said Marika Dias, managing director of the Safety Net Project at the Urban Justice Center. "So we could see a situation where the courts decide that even though they have permission to pause, they don't have to. Cuomo has taken no steps to prevent that."

The courts' flexibility has already been evidenced, Dias noted, by a recent move to resume housing trials in New York City that predate the coronavirus pandemic. By Sept. 8, courtrooms will be open in every borough but the Bronx, according to the Office of Court Administration.

"I'm not sure what tenants are supposed to make of all of this," Dias said.

For the time being, Judge Marks' guidance prevents the legal eviction of more than 14,000 New York City households that received a warrant before the pandemic. New York City's Office of Civil Justice identified the households last month.

"Those are the people that keep me up at night," Judith Goldiner, attorney-in-charge of the Civil Law Reform Unit at the Legal Aid Society, told Law360. When evictions do eventually proceed, she added, these households could have few options in court.

For example, they do not qualify for protections under the recently signed Tenant Safe Harbor Act, which creates a special defense for tenants facing eviction for unpaid rent accrued after March 7.

The courts are "totally winging it," said Esteban Girón, an organizer with the Crown Heights Tenant Union. He urged the state to pass bills that would reinstate a blanket eviction moratorium and cancel rent and mortgage payments for months beyond New York's ongoing state of emergency.

Landlord attorneys, meanwhile, are increasingly frustrated that new eviction cases are not proceeding beyond the filing stage.

"New filings are being given index numbers but no return dates, so the petitions can't be served and the cases can't be heard," said Nativ Winiarsky, partner with Kucker Marino Winiarsky & Bittens LLP. "In short, little, if any, relief is being provided [to] landlords at the present time and the maxim 'justice delayed is justice denied' is becoming all the more apt and relevant."

Cuomo's office defended the governor's action on evictions in a statement to Law360.

"Anyone paying attention would know that Governor Cuomo signed into law a moratorium on residential evictions for anyone who has suffered a financial hardship, due to the pandemic, for the duration of the crisis," Cuomo spokesperson Caitlin Girouard said, referring to the Tenant Safe Harbor Act.

But tenant attorneys said Thursday that the reality is more complicated, and that they are already hearing from renters who will not qualify for existing pandemic-related protections. They bemoaned the piecemeal nature of housing court regulations — and the now monthly cycle of anticipation and frantic interpretation.

"Every month we now have to wait for the governor to sign an executive order and then we have to hold our breath again and hope that the court continues to tie that to a moratorium on evictions," said Joanna Laine, a member of the Association of Legal Aid Attorneys. "It's unbelievably difficult to explain that to a client who is worried the very next week they might be receiving an eviction notice."