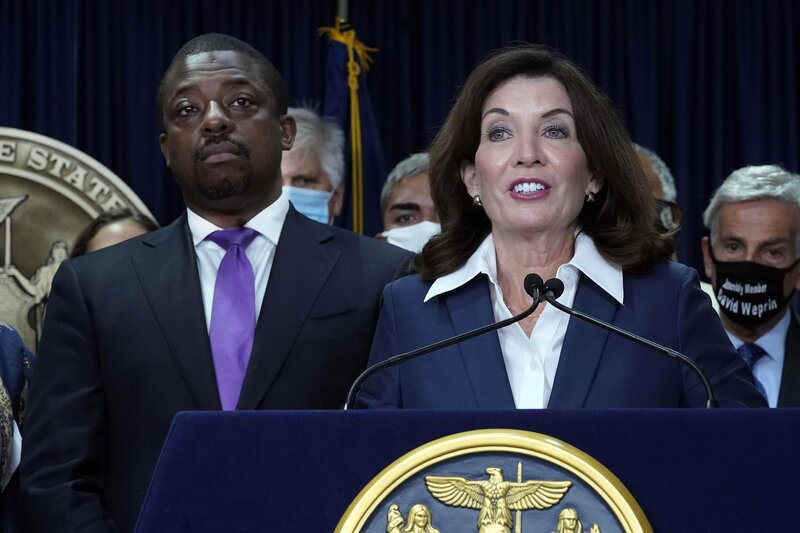 The state is at a "very critical juncture" and is on track to go through all of its federal dollars by early October, Hochul wrote in a letter Tuesday to the U.S. Department of the Treasury, which is responsible for allocating billions of dollars to jurisdictions across the country.

New York's Office of Temporary and Disability Assistance, or OTDA, was allocated about $2.67 billion in primarily federal funding for its pandemic rent relief program, receiving more money from Washington D.C. than most other states.

Taking outreach and administration costs into account, OTDA says it initially had about $2.4 billion for rent and utilities in its Emergency Rental Assistance Program, or ERAP. More than 65% of that pot has now been paid to landlords or at least temporarily set aside on behalf of qualifying tenants, covering more than 120,000 households.

Need in the state "far exceeds available funding, and an additional allocation of federal funding will be required to address the crisis," Hochul wrote in her letter Tuesday.

The federal government has set a Sept. 30 deadline to reallocate unused funds to high-need jurisdictions across the country. A U.S. Treasury spokesperson told Law360 that details on reallocation will be available in the coming weeks.

Exactly how many New York households are behind on rent — and to what extent — is difficult to pin down, according to Matt Murphy, executive director of the Furman Center at New York University. This is because the rental market is "extremely diverse and completely fragmented."

Still, he said, "no matter what methodology you use, there's tremendous need out there."

The National Equity Atlas, drawing on U.S. Census data, pegs the number of households currently behind in New York at 552,000. The Federal Reserve Bank of Philadelphia, which factors in the impact of federal stimulus payments and pandemic unemployment benefits, pegs the figure in New York at 155,600.

ERAP came under intense scrutiny following its June 1 launch. Not only did New York begin accepting applications later than other states across the country, but its online portal proved glitchy and onerous. The first trickle of payments didn't reach landlords until mid-July.

Months later, the state has issued more than 40,000 payments to landlords totaling more than $517 million, according to Sept. 21 data from OTDA. That's nearly six times the number of payments issued by early August. In the last week, the total amount paid has increased 30%.

"New York is improving quite a lot given the amount of time the program has been on the ground and in operation," said Rebecca Yae, a senior research analyst with the National Low Income Housing Coalition, which is tracking programs nationwide.

But more money is being held in the wings than has reached landlords' pockets.

Both tenant and landlord advocates have their eyes on more than $1 billion OTDA currently has set aside while it attempts to link a large pool of approved tenant applications, more than 80,000, with landlord counterparts — a prerequisite for cutting a check. The agency refers to these as "obligated" funds.

Under state law, obligated funds must be held in reserve for 180 days before they can potentially be diverted to another landlord in need.

OTDA has attributed the discrepancy between funds paid and obligated to incomplete and inaccurate applications, as well as landlord nonparticipation, but has declined to provide a precise breakdown.

"There seem to be a lot of applications in limbo here and pending landlord verification," Peter Hepburn, assistant professor of sociology at Rutgers University, told Law360. "We're talking about 80,000 households that have applied for help, been cleared by the state, and are now stuck waiting."

Ellen Davidson, a staff attorney with the Legal Aid Society, stressed that although tenants with a pending ERAP application benefit from a stay of any eviction case, the amount of funds in the obligated column is concerning.

"The purpose of this program is to make landlords whole," she said.

There are recent signs that OTDA has "cleared some of the clogs," according to Jay Martin, director of the Community Housing Improvement Program, a landlord trade group in New York City.

"They're trying," echoed Valentina Gojcaj, a property manager and owner in the Bronx. "There's movement."

According to Gojcaj, the agency recently sent her a personalized rundown, showing that a handful of her applications were incomplete — the rent ledger was missing, or a copy of the lease. In dozens of other instances, she said, she learned that the tenant had not completed his or her portion of the application. She now plans to reach out to those tenants.

Amanda O'Keefe, a staff attorney at MFJ Legal Services, is helping tenants apply. While some of her colleagues have encountered resistance from landlords, O'Keefe said, in her experience OTDA is struggling to match her clients' applications with their landlord counterparts.

"I get emails from clients asking them to check in [with their landlords], and then I find out the landlord did submit their documents," she said.

An OTDA spokesperson said that the agency has dedicated 100 staff to the task of landlord outreach as of the beginning of September.

As the program "continues to build momentum, we are making a concerted effort to engage landlords, ensure submitted applications satisfy federal guidelines and get this critical funding to its intended recipients," the spokesperson said.