A History Of Supreme Court Confirmations In 3 Charts

Law360 (September 26, 2020, 5:30 PM EDT) -- With five weeks to go before Election Day, the race is on for President Donald Trump to secure Judge Amy Coney Barrett's confirmation to the U.S. Supreme Court bench.

Senate Republicans are eyeing an aggressive timetable to secure the necessary votes to confirm Judge Barrett and face staunch opposition to the effort from their colleagues on the other side of the aisle.

Here's a look at how past confirmations have played out, how long they took, how tough the fights were, and how some unexpected twists and turns complicated the process along the way.

No justice has ever been formally confirmed to fill a vacancy on the high court within two months of a presidential election. While Senate Republicans are laying out a crisp timetable for committee hearings, debates and votes in order to get the confirmation done before Election Day, it would be a feat never before accomplished.

The average time, from 1868 onwards, is about 30 days — but confirmation has taken almost double that in recent years. Chief Justice John Roberts, who was confirmed in only 23 days, stands apart from the justices on his court. However, his speedy confirmation to chief justice did come after he had already been nominated for the position of associate justice in July 2005. After the death of Chief Justice William Rehnquist on Sept. 3, Roberts was tapped for chief justice and confirmed by the Senate just ahead of the October 2005 term.

The late Justice Ruth Bader Ginsburg's confirmation took 50 days, and the timetable for all the remaining sitting justices has ranged from 66 to 99 days.


On the current court, Justice Clarence Thomas holds the record, having withstood a 99-day confirmation process in 1991.

Justice Louis Brandeis had the longest wait for confirmation since the turn of the 20th century — just over four months.

While 152 days passed between Chief Justice Earl Warren's selection in 1953 and confirmation in 1954, the California governor took to the bench immediately as a recess appointment. He was confirmed 49 days after his nomination formally went to the Senate.

It is possible to win confirmation on the day of nomination, history has shown. Four justices, including former President William Howard Taft, have done so. Two of Franklin D. Roosevelt's appointments, Justices Robert H. Jackson and James L. Byrnes, were confirmed a month apart on same-day votes in 1941.

The time from nomination to confirmation has grown in recent years — and for many justices, so has the political opposition.

Justices Samuel Alito, Sonia Sotomayor and Elena Kagan did not obtain similar overwhelming majorities in the Senate, as judicial nominations have moved to the center of the political battleground in the past few decades.

Justice Thomas was narrowly approved by the Senate with 52 votes, and Justice Brett Kavanaugh secured a mere two-vote margin, with a confirmation vote of 50-48.

Justice Neil Gorsuch, like Justice Kavanaugh a Trump appointee with conservative bona fides, won only 54 votes — an example of how politically charged the process has become.

The Roberts court has had its share of twists, with the sudden death of Justice Antonin Scalia in 2016 and the retirement of Justice Anthony Kennedy two years later. The loss of Justice Ginsburg just ahead of a presidential election is yet another unexpected turn, and one that only a handful of other presidents, and justices, have faced.

With a high court vacancy close to a presidential election, these presidents had to carve unusual paths for their nominees to take the bench. 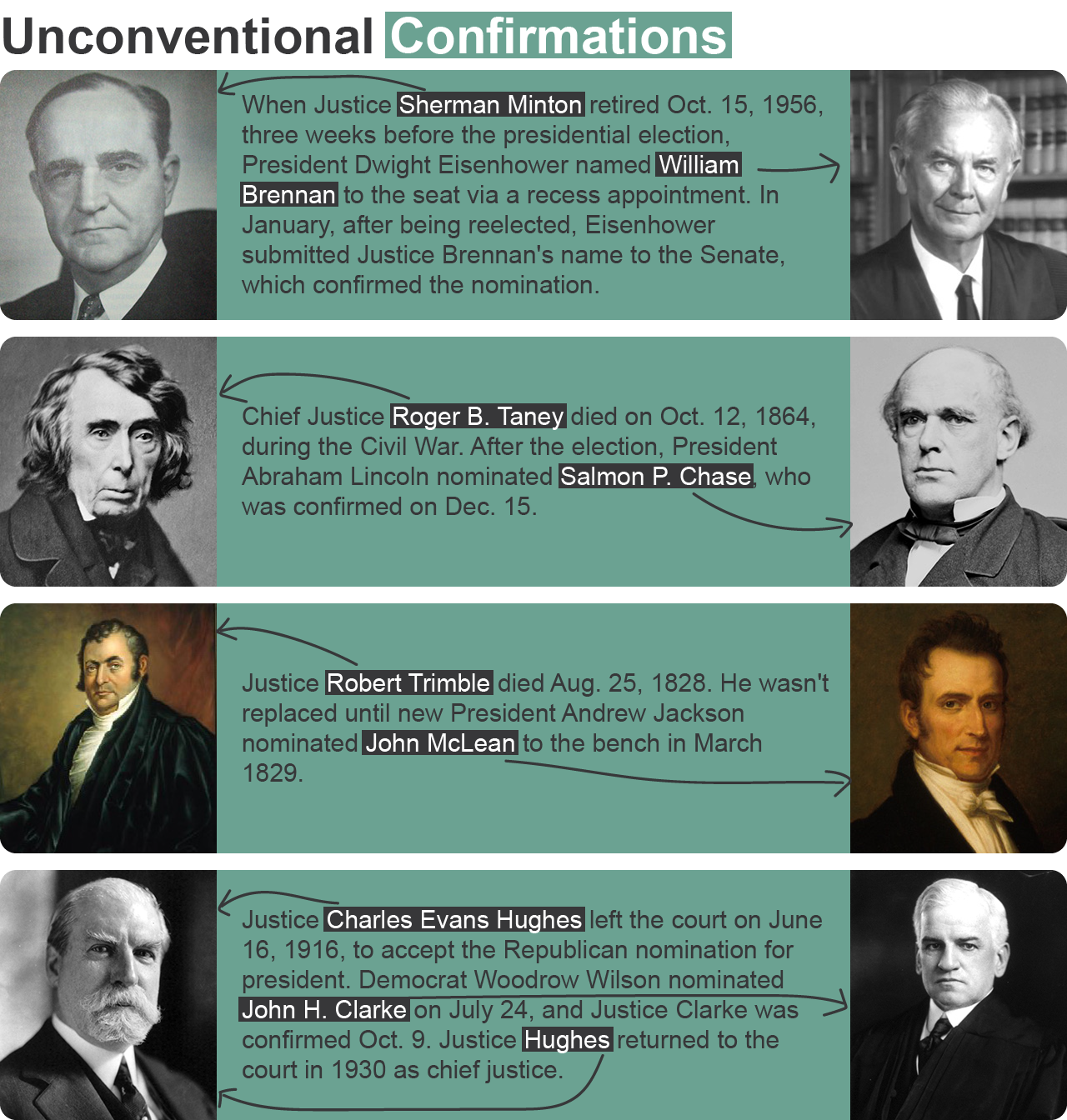 Update: This article has been updated to include a more detailed account of Chief Justice Roberts' confirmation process.