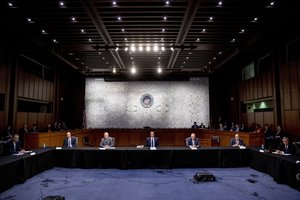 "Changes to the legislation are being made even as we speak," he said. "The bill can and must continue to improve."

Senate Democrats said they opposed the legislation because it would provide the U.S. Department of the Treasury with an unaccountable "slush fund" to address the impact of COVID-19, the illness caused by the coronavirus. There was also confusion about whether expanded unemployment benefits would last for three or four months, Senate Finance Committee ranking member Ron Wyden, D-Ore., told reporters.

"I'm gonna be staying here for however late it takes," Wyden said. "I think we are going to get this done in a way that is fair, makes common sense and really deals with this unprecedented challenge."