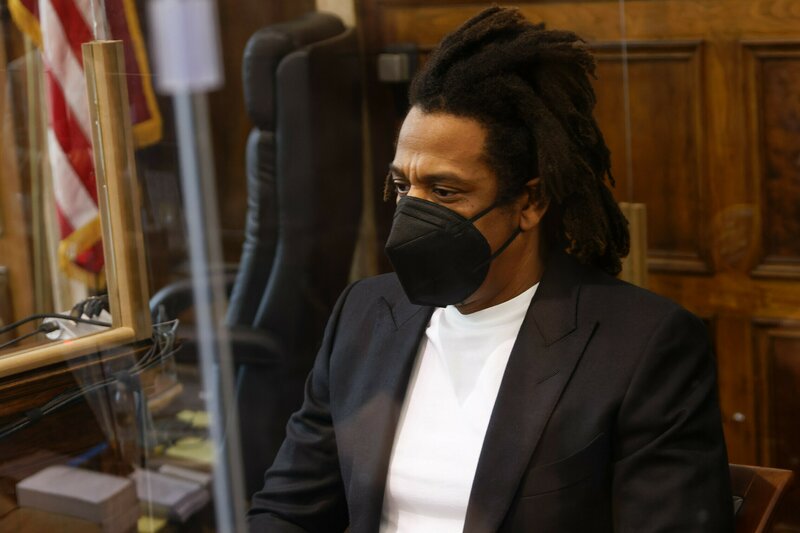 Jay-Z testified in person Friday before a jury at a New York civil trial. He is accused of failing to promote his Gold Jay-Z cologne. (Pool photo/Alex Tabak)

Fresh off accepting his induction into the Rock & Roll Hall of Fame on Halloween, the hip-hop icon and billionaire businessman, whose legal name is Shawn Carter, spent most of the morning sniping at Parlux counsel's "little lawyer tricks" before his attorney gave him latitude to trash the perfume company for what he called its unoriginal thinking and failure to understand his luxury brand.

"Pretty much like all their ideas — lazy," Jay-Z said, as the jury reviewed emails showing how he reluctantly approved it on the eve of the Macy's launch of the cologne, including one lamenting that "it's a B rate commercial and my name is on it."

"I was being kind," Jay-Z quipped, drawing laughter from the jury.

Spiro called up a February presentation of a follow-up product in United Kingdom discount store Superdrug that Jay-Z claims was never approved.

"Again, it's crappy, lazy work," Jay-Z said. The music mogul said he was never told about the rollout and never would have approved launching his high-end product in a discount store. An email from his aide during the time of the Superdrug launch said, "Parlux is out of control … they are rogue."

Still, he continued to work with Parlux, he testified.

"It was a tough relationship, but I was still trying to make something amazing," Jay-Z told the jury.

Jay-Z has been depicted by Parlux as an absentee promoter who abandoned the perfumer and cost the company millions. He has countered in legal filings that the perfumer fails to understand that he is a savvy global businessman protecting his personal brand from being sold "on the shelves of Walmart between hand sanitizer and Tic Tacs."

The suit was first filed in January 2016 by Parlux and its parent, Perfumania Holdings Inc., with allegations that Jay-Z and his company, S. Carter Enterprises LLC, breached his contractual obligations to promote the Gold Jay-Z cologne.

Jay-Z countersued, claiming he was still owed more than $2.7 million under the deal in royalties.

After being repeatedly quizzed on discrepancies between his apparently clearer memory on the stand and his deposition testimony, where he often said he could not remember, Jay-Z said he hadn't prepared as carefully for the 2019 deposition as he had for trial.

"These kinds of shakedowns happen all the time. They rarely make it to court," Jay-Z said, referring to the Parlux lawsuit and others like it. "I didn't think we'd be here today."