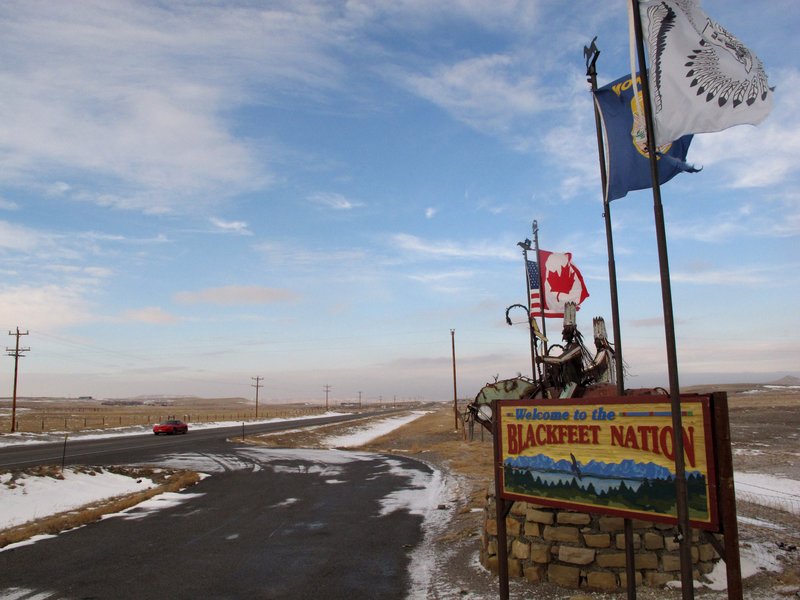 The Blackfeet Reservation sits at the foothills of the Rocky Mountains in Montana. Old jurisdictional rules require residents caught up in legal battles to drive two hours to a federal courthouse, even though there's a tribal court up the street. (AP)


Belinda Bullshoe was still mourning the loss of her foster daughter when she was arrested and charged with second-degree murder for the infant's death.

Out on bail, she was relieved to return home to the Blackfeet Reservation, which sits at the Rocky Mountains' eastern slopes, just south of the Canadian border. But she faced a new hurdle: the four-hour round-trip drive to meet with her attorney in Great Falls, Montana.

During her trial, Bullshoe and her family rented a hotel room they could barely afford, to avoid commuting to the Great Falls courthouse. But for months before that, she drove there regularly to meet with her federal public defender, Anthony Gallagher, and sift through medical reports that indicated her daughter died of health complications, not shaken baby syndrome as prosecutors alleged.

Those meetings helped win Bullshoe's acquittal, but getting to them wasn't easy. Bullshoe was indicted in January 2010, and the harsh Montana winter compounded the long and difficult journey on narrow roads with steep side slopes.

"We traveled down in blizzards, on icy roads. There was no option to not go," Bullshoe said. "This was literally my whole life."

Native American reservations often sit in remote corners of sprawling states, and Bullshoe's commute to court wasn't even the worst of them. Fort Peck, also in Montana, is a nine-hour round trip to the Billings courthouse in good weather. Residents of the remote corners of the Navajo Nation in Arizona must drive three and a half hours each way to the nearest federal courthouse in Flagstaff. In Wyoming, some cases from the Wind River Reservation go to Cheyenne, a five-hour trek each way.

Many reservations have their own tribal courts. But old treaties, federal laws and ever-evolving case law have created a dizzying jurisdictional maze for crimes that occur on the tribe-controlled lands known as Indian Country, and many cases end up in federal court.

That can mean indigenous victims, defendants and witnesses must travel for hours, sometimes over treacherous roads, to testify before jurors and judges who have nothing to do with the community where a crime took place.

Bullshoe would have faced a district attorney, not a federal prosecutor, if she hadn't lived in Browning, Montana.


That's because of the Major Crimes Act, passed in 1885 as Congress began to turn its back on tribal sovereignty. The law gave federal courts purview over crimes that occurred on tribe-owned land. Cases that ordinarily would not merit federal prosecution — including murder, assault, arson and larceny — fall to U.S. attorneys if they occur on reservations.

Those cases often involve sexual assault and violent crimes that are tough to prove, according to Brendan Johnson, who served as South Dakota's U.S. attorney during the Obama administration and now chairs Robins Kaplan LLP's practice group dedicated to American Indian law.

Sometimes, prosecutors prioritize bigger cases they're more likely to win, like health care fraud and white collar crime cases, and "Indian Country ends up getting the back burner," he said.

"When you're a U.S. attorney in South Dakota, it's almost like being a district attorney, in terms of the kinds of cases you get," Johnson said. "Declination rates are more similar to what you would see from a DA's office, because the cases are really tough and they're often based on one witness."

In 2016, U.S. attorneys declined to prosecute 34% of all Indian Country matters brought to them, more than double the 16.4% of cases nationwide that federal prosecutors declined to pursue.

One 26-year-old nursing student who lives on the Fort Belknap reservation told Law360 the FBI began investigating a possible sexual assault charge against a family member after she took out a restraining order against that person in tribal court.

The woman, who asked to remain anonymous because her case is pending, used to worry about how she would balance court appearances three hours away with her job and caring for her two young children. But after a yearlong investigation, there's been no federal indictment.

"It's sad, because you'd think that something would happen right away, or that someone would care enough to make something happen," she said.

Federal jurisdiction also makes life more difficult for Native American defendants, because a crime can carry a harsher sentence just by virtue of where it happened.

Jim Loonam, an assistant federal public defender in New Mexico, once represented a Navajo man who didn't realize his home sat on tribal land. He was charged with sexual abuse of a minor, a crime that carried a harsher sentence under federal jurisdiction than it would in state court.

"He was inside Indian Country by less than 50 yards," Loonam said. "Those 50 yards made the difference between a zero-to-18-year sentence and 30 to life."

Gallagher, the public defender who won Bullshoe's acquittal, said he tries to visit clients as often as possible, "just as any lawyer would." But the sprawling landscape of the American west creates challenges.

"When you leave at 8 o'clock in the morning and you might get there at 3:30, it significantly cuts down on your time with the client," he said.

Traveling to federal court can be a financial hardship, according to Fawn Williamson, a victim-and-witness specialist in the tribal prosecutor's office on the Fort Belknap reservation in Montana, where nearly half of residents live in poverty.

An FBI program provides some compensation or transportation to witnesses and victims, but the coordinator is stretched thin covering three reservations, Williamson said, and there is no public transportation.

"Taking a trip to Billings or Great Falls is not something you just do," she said. "I had to have this conversation with the U.S. attorney's office a few months ago, because they subpoenaed a victim on a Friday and they wanted her to come in on a Tuesday. I told them, 'I work, I have a full-time job, and I still can't just get up and go that far, because of the financial burden.'"

There's a Catch-22 to federal jurisdiction, said Kate Seaton, an attorney with Montana Legal Services Association. Some victims want to testify and attend hearings, but it's a financial hardship. Other domestic violence victims want might want to reconcile with a partner to ensure their children have housing and food. It may be easier for them to speak up when their cases are prosecuted locally, Seaton said.

"It's hard for that victim to engage in advocacy on their own behalf in the federal system because it's intimidating, or they don't know who to contact or they don't trust those people because they're not a part of their community," Seaton said.

This signals a different sort of distance between the reservation and the federal courthouse: a cultural one.

"There's a fear factor," Williamson said. "I've had investigators tell me Fort Belknap is a closed-off community, and people don't like to talk or tell you anything. We do see reluctant or hesitant witnesses and victims."

But some of those complaints are based on misconceptions. For example, Williamson has had to explain to investigators that some Native American witnesses might avoid eye contact — it's considered rude and confrontational.

Supervisory Special Agent Jerry Grambow said the FBI works to build trust on tribal lands by holding community forums and working collaboratively with tribal law enforcement, so officers know who to contact within the bureau.

"We make sure that we are seen in the community," he said. "Then, because they've seen us, they will feel comfortable coming to us when they so wish."

Bullshoe had a hard time trusting her public defender at first, after her experience with the investigators who ended up charging her.

"When I came to see Anthony at his office, he kept trying to assure me they were there for me," she said. "I didn't trust him for the first four months."

A Court Across the Street

In the last decade, Bullshoe went from attempting suicide as she faced federal charges to becoming a fashion designer presenting her couture in New York and Paris. But until her acquittal, she struggled to balance the four-hour round-trip drive to see Gallagher with shifts at the restaurants where she worked.

"We had to get down there. There were times we didn't have money for gas. We somehow managed. Family helped us," she said. "It was a hard time, and a traumatic situation. My whole life was at a standstill." 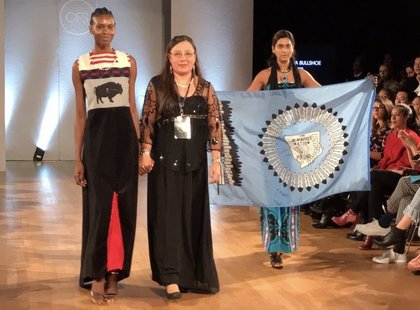 Distances like the one between the Blackfeet Reservation and Great Falls run afoul of basic American constitutional principles of community representation, according to Kevin Washburn, dean of the University of Iowa College of Law. Under the current system, he said, not only is law enforcement from a different community, but many Indian Country cases go before an all-white jury.

"Juries don't serve their purpose when they don't represent the community where the crime occurred," Washburn said.

When Johnson served as chairman of the Native American Issues Subcommittee during his stint at the U.S. Department of Justice, he helped institute a program designating tribal prosecutors as special assistant U.S. attorneys, so they could second-chair trials and help clients navigate federal court.

But Washburn, who himself served as a federal prosecutor in New Mexico and is a member of the Chickasaw Nation of Oklahoma, called the special attorney program "a very modest effort to deal with one portion of a deeply systematic problem." He said tribal prosecutors still travel to far-off courthouses and navigate FBI agents, judges and juries who aren't from their community.

"There's no federal official who's going to lose his or her job because he inconvenienced an Indian family. But there's a tribal leader who very well might," Washburn said.

"Extending tribal jurisdiction, so it's a tribal judge and tribal police officers and tribal jailers and tribal probation officers, is the systematic way to make life better for Native victims and Native defendants and the Native community as a whole," he added.

Changing jurisdictional rules would likely require action by Congress. But there have already been moves to expand tribal sovereignty. In 2013, the Violence Against Women Act was reauthorized with provisions that allowed tribes to charge non-Indian offenders in domestic violence crimes, nullifying in part a 1978 Supreme Court decision that barred tribes from prosecuting nonmembers.

In the five years since VAWA passed, tribes have convicted 74 non-Native people on domestic violence charges and have 24 more cases pending, according to a report from the National Congress of American Indians. They also declined to prosecute 19 cases. Tribes can point to the successes of wider jurisdiction, and that's opened the door, Washburn said, for "modest incremental expansions."

"The bottom line," he said, "is why people have to drive all the way to federal court when there's a tribal court across the street."

Correction: In an earlier version of this story, a caption incorrectly identified where the runway photograph was taken. The error has been corrected.