In Indian Country, A 'Maze Of Injustice' Persists For Women 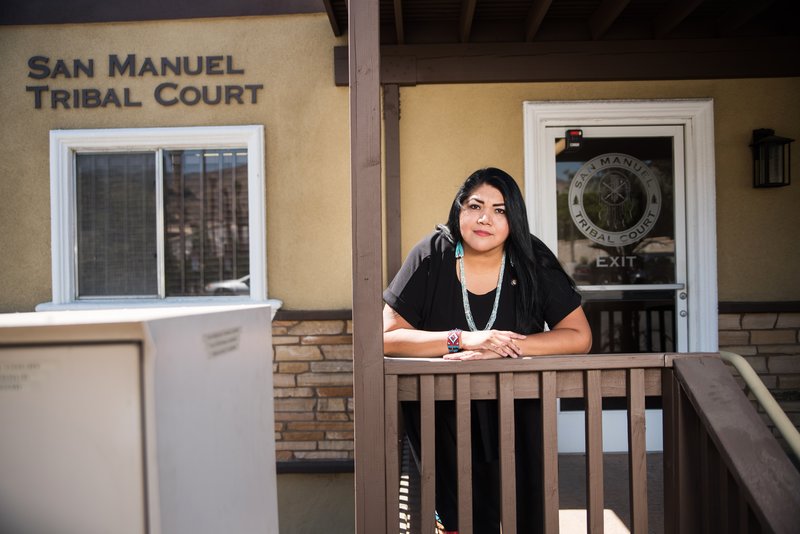 Judge Claudette White, who has served on multiple tribal courts, says such courts in California are forced to use workarounds to protect tribe members from violence because of inadequate legal protections. (Amina Touray for Law360)


In December 2010, Judge Claudette White from the tribal court of the Quechan Tribe in Southern California was trying to file a protection order for a woman who had been attacked and whose attacker was still at large.


The judge had issued the order herself and filed it with tribal law enforcement, then taken it to a sheriff substation just off the Quechan reservation. Some women on the reservation had reported problems trying to register protection orders with the county, and Judge White hoped going in person would ease the process.

But when she got there, the deputy refused to enter the order into the county system.

"I took the order directly to them in hopes that they would [say] 'OK, this is a valid order,'" Judge White said. "I told them who I was, gave them the order, told them the circumstances, and that's when they told me they couldn't do anything."

For many indigenous women in the United States, legal protections against domestic violence and sexual violence are hard to come by. In a 2006 report, Amnesty International described the legal system for Native American women in the U.S. as a "maze of injustice," a term observers say still applies.

The reauthorization of the Violence Against Women Act in 2013 attempted to address some of these issues, but tribes and advocates say it didn't go far enough — protecting only certain victims — and that most tribes haven't been able to qualify to take full advantage.

A 2019 VAWA reauthorization bill passed by the U.S. House of Representatives would build on the progress made in 2013, potentially helping more women living on reservations and other Native communities and further empowering tribes to address violence against Native women.

The fate of the measure, though, is unclear, leaving many tribes to hammer out their own imperfect solutions.

The Epidemic and the Maze

Although all people living on lands controlled by tribal nations face issues of access to justice, the legal framework is particularly relevant to violence against Native women, which is at epidemic levels and occurring in even greater numbers compared with women in the general population.

According to a 2016 report by the National Institute of Justice, more than half of Native women in the U.S. have experienced physical violence from an intimate partner. A similar number report they have been sexually assaulted.

A patchwork of statutes, government policy and U.S. Supreme Court precedent covering how crime is handled across the country's 326 reservations and on other tribe-controlled lands — collectively known as Indian Country — have fueled that epidemic, experts say.

An Epidemic of Violence

More than 84% of Native women have experienced violence, a higher rate than non-Native women, according to a 2016 report using data from the 2010 National Intimate Partner and Sexual Violence Survey:

Unlike states or municipal governments, a tribe's ability to investigate a crime committed within its boundaries, make an arrest or prosecute an offender is limited based on who the parties involved are.

According to a 2018 report from the National Congress of American Indians, tribal officers typically act as first responders or are the initial law enforcement officers to investigate a crime in Indian Country, but then must determine whether another agency has jurisdiction, a question that is often difficult to parse.

This can lead to multiple rounds of investigation or overlapping investigations that might never move forward, the NCAI said.

In many cases, tribes must ask outside agencies, such as the FBI, to step in.

Often, that means relying on agents who are far away and overburdened, and who usually don't have a relationship with the community. As of the end of 2018, the FBI had 140 special agents and 40 victim specialists to handle cases in Indian Country, which includes over 1 million people.

"Even if the FBI comes out and does an initial interview and investigation, they often do not do any follow-through," said Sarah Deer, a Kansas University professor whose work focuses on the intersection of Indian law and victims' rights. "Native women have described calling the FBI to get the status of their case and not being able to get anyone to return their call."

Supervisory Special Agent Jerry Grambow, who spent eight years in the field handling Native American cases in the Southwest, told Law360 the FBI tries to keep victims up-to-date on cases and that the bureau takes cases in Indian Country seriously. He said he was unaware of any examples of FBI agents not investigating a reported crime.

"The FBI feels that all victims are important. We don't have any low-priority victims," he said.

The questions surrounding jurisdiction extend beyond the law enforcement agencies responsible for investigating crimes: Tribal courts are also constrained in their ability to oversee cases involving violence against women.

In 1978, the Supreme Court ruled in Oliphant v. Suquamish that tribes did not have the authority to prosecute non-Native people, a doctrine that remains in place today for almost all crimes. This carries particular weight for indigenous women, since research from the National Institute of Justice and other sources suggests the vast majority of perpetrators of violence against Native women are non-Native.

Congress has also limited the ability of tribal courts to sentence all offenders, regardless of tribal status. For some tribes, the maximum sentence a tribal court can impose for any crime is one year in prison; other tribes are able to sentence up to three years for individual counts and stack counts for a maximum nine-year sentence.

In comparison, most people convicted of sex crimes in federal court face a mandatory minimum of 10 years or more, according to a 2019 report from the U.S. Sentencing Commission.

"Tribes really struggle because we don't have the same authority the state has to protect its own people," Deer said.

The 2013 reauthorization of the federal Violence Against Women Act was supposed to help combat some of those problems. Under the law, tribes can apply for special jurisdiction to prosecute nontribal members for domestic violence crimes in tribal courts.

During the first five years the law was in place, participating tribes reported 143 arrests of 128 different non-Native people, leading to 74 convictions and five acquittals. At least 33 were sentenced to serve prison time.

Brent Leonhard, a tribal attorney for the Confederated Tribes of the Umatilla Indian Reservation in Oregon, one of the first tribes to be granted special jurisdiction under VAWA, said more people are coming forward now to report domestic violence.

Special Jurisdiction:
By The Numbers

In 2018, five years after the 2013 reauthorization of the Violence Against Women Act allowed tribes to secure special jurisdiction to prosecute nontribal members for domestic violence crimes, at least 18 tribes had taken advantage of that option. Those tribes at the time reported:

"Victims now know that if they call the police, there will be accountability," he said. "Previously, there were hardly any that were being reported, even, because the victims knew that the non-Indians would get away with it."

However, according to an NCAI report in 2018, only 18 of the more than 500 federally recognized tribes have been approved to exercise special jurisdiction under VAWA.

According to the NCAI, some tribes have chosen to prioritize other projects or community needs while others have been unable to shoulder the costs of meeting the statute's requirements, such as training and hiring additional prosecutors. And while the U.S. Department of Justice awards grants ranging from $300,000 to $450,000 to help fund implementation, it's still not enough for some tribes.

The Pascua Yaqui Tribe in Arizona was able to self-fund its own implementation, but only because of a $21 million grant several years earlier that allowed it to construct a new justice complex, according to a report from Tribal Access to Justice Innovation.

Pascua Yaqui Chief Prosecutor O.J. Flores estimated as part of the report that for some tribes, special jurisdiction would cost well over $1 million to implement.

The law is also limited in scope. It allows for domestic violence prosecutions but leaves out other crimes that are often connected, said Rachel Carr, executive director of tribal domestic violence coalition Uniting Three Fires Against Violence.

Proposed changes in the 2019 bill would make it possible for tribes granted special jurisdiction to charge nontribal members not only with domestic violence, but also sexual violence, violence against children, human trafficking, and crimes against tribal law enforcement.

It would also create a pilot program for five Alaskan tribes to exercise special jurisdiction, something Alaska Natives were unable to do under the 2013 reauthorization bill. 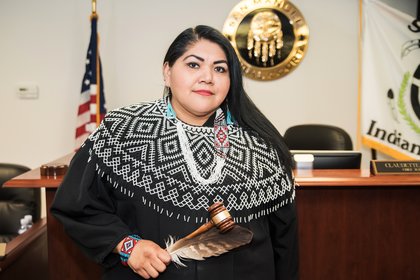 For advocates in Alaska, that change would be long overdue.

"Many of us had been involved in helping with VAWA 2013," said Tami Jerue of the Alaska Native Women's Resource Center. "And when it came through with the particular amendment that said that basically Alaska was exempt from everything ... I can remember people saying they cried when they found that out."

The House has passed a version of the reauthorization bill that would expand jurisdiction for tribes, but the Republican-controlled Senate is not expected to adopt it.

While opponents of the House-based VAWA reauthorization have been most vocal about nontribal elements of the measure, such as its restrictions on gun ownership, provisions concerning Indian Country have generated pushback as well.

Opponents of the bill in the House said in an official committee report that further expanding tribal jurisdiction over non-Native people creates "due process concerns," but did not elaborate.

Those concerns might be the same ones that many lawmakers, particularly Republicans, raised during previous reauthorization.

At the time, critics questioned whether tribal courts would adhere to constitutional protections, such as whether nontribal defendants would face all-Native juries, rather than a jury of their peers.

Advocates have argued that tribal juries are not racially homogenous and include non-Native people who live on reservations. The final 2013 VAWA bill also made special jurisdiction for tribes contingent on honoring constitutionally required protections for defendants.

Many say the true solution to the problem would be to eliminate the jurisdictional maze altogether and for Congress to restore tribal jurisdiction over nonmembers who commit crimes on tribal land.

"There's really no excuse for it in this day and age to have these limits on tribal jurisdiction," Deer said. "It's demeaning and it's dangerous."

Without a policy fix, justice for many victims will continue to hinge on cooperation between tribal and nontribal institutions, which advocates say is sorely lacking.

After being rebuffed by the deputy, Judge White called a California state judge she knew, Judge Juan Ulloa, to speak to the officers. "As soon as I put him on, their attitudes changed," she said. "You know, 'Yes judge, right away, judge.' Completely different from the way they were treating me."

Judge Ulloa convinced the officers to recognize the order, and after that, the tribal court and state court worked out a system in which the tribe would ask a state judge to endorse its protection orders, allowing them to be entered into the state database.

But that system is imperfect.

As Judge White points out, it undermines the tribe's authority and sovereignty to have to get a sign-off from a state court. It also relies on the goodwill of the state judges.

"Those are all steps that are not required under the law," she said. "But that's the end-run we're required to create to protect our members."