By Craig Clough
Law360 is providing free access to its coronavirus coverage to make sure all members of the legal community have accurate information in this time of uncertainty and change. Use the form below to sign up for any of our weekly newsletters. Signing up for any of our section newsletters will opt you in to the weekly Coronavirus briefing.


Law360 (March 17, 2020, 5:14 PM EDT) -- Fortress, the company that bought patents developed by Theranos and Elizabeth Holmes, on Tuesday offered royalty-free licenses for its patented diagnostics technology for use in COVID-19 tests after facing backlash to a patent infringement lawsuit it filed last week against a company working on coronavirus tests. 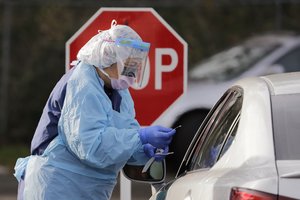 Nurse Theresa Malijan takes a swab from a patient Tuesday at a COVID-19 testing station in Seattle. Fortress said Tuesday that its subsidiary didn't know Biomeriux was involved in developing coronavirus tests when it filed a patent suit against the company. (AP)

Fortress Investment Group LLC, a fund manager owned by Japan's SoftBank Group Corp., issued a statement that said when its subsidiary Labrador Diagnostics LLP filed the lawsuit on March 9 in the District of Delaware against Biomeriux SA and one of its subsidiaries, it was unaware Biomeriux was involved in developing coronavirus tests.

Fortress said that the lawsuit was filed two days before Biomeriux announced it was developing COVID-19 tests, and that the litigation "focuses on activities over the past six years that are not in any way related to COVID-19 testing."

The company added, "Labrador fully supports efforts to assess and ultimately end this pandemic and hopes that more tests will be created, disseminated, and used to quickly and effectively protect our communities through its offer of a royalty-free license during the current crisis."

The litigation involves a panoply of companies on the plaintiffs' side that have experienced negative headlines, setbacks, major litigation or legal trouble in recent times, all well before the blowback on the Biomeriux lawsuit occurred.

Former Theranos CEO Elizabeth Holmes is facing wire fraud and conspiracy charges in California federal court alleging she and another executive defrauded doctors, patients and investors into believing the now-defunct company had developed revolutionary blood-testing technology that could run multiple tests on a single drop of blood.

Fortress, which bought up Theranos' blood-testing patents, is facing a lawsuit filed by Apple and Intel on allegations Fortress is using "ill-gotten power" to extort excessive royalty fees for weak patents that their original owners would have never asserted.

And Fortress' owner SoftBank lost billions last year due to its investment in WeWork, which saw a planned IPO crumble in the fall as its valuation shriveled from about $47 billion to less than $8 billion under investor scrutiny.

Mozilla senior IP and product counsel Daniel Nazer in a Monday tweet summed up a lot of the negative reaction to the Fortress lawsuit against Biomeriux, and after noting the involvement of Theranos, SoftBank and Fortress, called it "the Lollapalooza of patent trolling."

The March 9 lawsuit makes no mention of COVID-19 but accuses French company Biomeriux and its Delaware-incorporated subsidiary BioFire Diagnostics LLC of infringing U.S. Patent Nos. 8,283,155 and 10,533,994.

Labrador claims among other things that products developed by the defendants aimed at detecting analytes in bodily fluids infringe the patents.

Biomeriux did not immediately respond to requests for comment.

Counsel for the defendants was not immediately available.