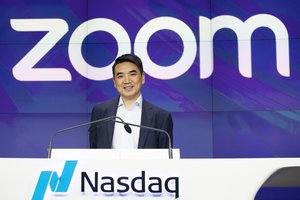 Efforts to stop the spread of the virus have forced governments from Mumbai to Munich to compel their citizens to stay at home in an unprecedented restriction of movement outside of wartime. The shutdown of economies is forcing everyday businesses to close their doors, cutting off a source of tax revenue. The retail, hospitality and travel sectors are on the verge of collapse in many countries, with many economists predicting declines in gross domestic product of as much as 30%.

Meanwhile, internet activity has skyrocketed in recent weeks as households work from home, shop online and tap streaming sites for entertainment. Netflix and YouTube have reduced the image quality of their streaming material in Europe to take the strain off networks as volumes spike.

Those who have long pushed for digital companies to pay more tax say that now, more than ever, the companies must make a larger contribution to public budgets.

"There has never been a better time to move forward with a strong global digital tax," said Jason Ward, an Australia-based analyst at the Center for International Corporate Tax Accountability and Research. "These digital platforms provide valued services in the current crisis, but also stand to boost profits. As tax revenues from other sectors plummet, digital giants have an obligation to contribute back to society through increased tax payments."

The need for digital companies to give back some of the profit they could earn during the crisis also has resonance from political leaders in Europe.

There's even more of a need than before for tech companies to pay more in tax, said Paul Tang, a Dutch member of the European Parliament from the Social Democratic bloc.

Even before the coronavirus pandemic, digital companies were seen as paying less tax than their bricks-and-mortar counterparts, Tang said. This dynamic "becomes even more unpalatable when governments are tax-strapped," he told Law360.

Johan Langerock, a tax policy expert with the British charity Oxfam, spoke in favor of a solidarity tax applied to excess profits of companies that stand to profit from the pandemic.

"I think those kinds of measures will be needed and targeted toward highly digitalized companies that will be making huge profits," he said.

While it may be too early to know exactly how much money digital companies are due to make from the crisis, the conditions seem favorable for at least some of them to do very well.

Businesspeople who can't go to the office are relying on Zoom and other services for videoconferencing. Families that can't go to a theater — or really anywhere, as governments close nonessential businesses — will turn to streaming services such as Netflix. Book lovers will order books, or other items, via Amazon.

Zoom wouldn't provide usage figures but referred to a comment its CEO made March 4.

"With the reliability of our high-quality video platform, we have seen a large increase in the number of free users, meeting minutes and new video use cases," Eric Yuan, CEO of Zoom Video Communications Inc., said in an earnings call. This was before lockdown measures were announced across Europe, India and the U.S., so it's very likely that the increase in users has grown considerably since he made that statement.

Netflix also didn't reply to a request for comment.

The coronavirus crisis has hit during what was already a time of great upheaval in corporate taxation. The Paris-based Organization for Economic Cooperation and Development is currently leading a group of nearly 140 countries and territories in an effort to overhaul the rules of corporate tax.

While the rewriting of rules will likely impact all multinational companies, the impetus for these reforms came following cries that technology companies, mostly American, don't pay enough tax in countries in which they have many users.

The OECD hopes to have a deal in place by the end of the year and recently said that even amid the coronavirus crisis, with travel restrictions causing many events to be canceled globally, it still intends to meet that deadline.

Some of the loudest cries for reform have come from Europe, especially France.

France pushed hard for a digital services tax at the European level in 2018 and early 2019, only to see it fail for lack of unanimous support among fellow European Union states.

France and other countries such as Austria, Italy, Spain, the United Kingdom and the Czech Republic have also risked a trade war with the U.S. by proposing or implementing their own national digital services taxes in recent months. Even the United Kingdom, which is hoping for a trade deal with the U.S. following its departure from the EU, has stuck to its plan to introduce a digital tax later this year.

In an effort to ratchet down threats of tariffs against French products, the French government decided earlier this year not to collect income on its digital services tax until the end of the year. The French finance ministry didn't respond to a question about whether it is reconsidering this decision in light of expenses due to the coronavirus.

If the tech sector ultimately faces a higher tax burden in response to the crisis, it shouldn't be surprised. Speaking just last month, Facebook founder Mark Zuckerberg said his company was prepared to pay more in tax. Facebook didn't respond to a request for comment for this article.

Facebook and other tech giants likely won't face a higher tax bill immediately, as governments' attention is currently on solving the health crisis while ensuring that citizens have enough money to pay for food and basic necessities.

"I would not consider it as useful to discuss individual measures now, such as an increase of the digital tax," said Margit Schratzenstaller-Altzinger, an economist with Austria's Wifo economics institute, though she said such a measure could make sense later when the cost of the crisis becomes clearer.

EU leaders in the coming days are expected to begin discussing a crisis exit strategy to allow societies to return to normal. As this happens, and the discussion shifts more from the health crisis to the economic cost, it wouldn't be a surprise if the call for tech companies to pay more gets louder.