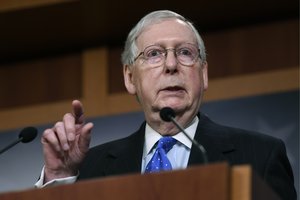 The Kentucky Republican said he will seek approval Thursday to replenish the program, which provides federal guarantees for commercial loans of up to $10 million for businesses with fewer than 500 employees. Treasury Secretary Steven Mnuchin said he asked for $250 billion in new funding.

"Jobs are literally being saved as we speak," McConnell said in a statement. "But it is quickly becoming clear that Congress will need to provide more funding or this crucial program may run dry. That cannot happen."

Within 12 hours of the program's start on Friday, the Small Business Administration reported that some 17,500 loans valued at $5.4 billion were approved.

"This trend will continue & at current pace funds could exhaust MUCH SOONER than anyone anticipated," Small Business Committee Chairman Marco Rubio, R-Fla., tweeted Tuesday. "The fear that #PPP will run out of money is creating tremendous anxiety among #SmallBusiness. We have days, NOT weeks to address this."

Until Tuesday, McConnell had wanted to hold off on new legislation while lawmakers evaluated the impact of the over $2 trillion relief package that became law March 27. However, he said the payroll subsidy needed topping off this week and is targeting Thursday's scheduled pro forma session to pass a bill using voice vote or unanimous consent — tactics used for consensus legislation that do not require many senators to return to Washington.

The Democrat-led House could approve a standalone measure using similar consensus tactics, but it's not clear whether Democratic leadership will be open to a piecemeal approach rather than the broader package they have outlined in recent days.

Speaker Nancy Pelosi, D-Calif., said in a CNN interview Tuesday that she agrees the program "really needs money right away" but that Democrats "want to make sure that the program is administered in a way that does not solidify inequality in how people have access to capital."

Pelosi and Senate Minority Leader Chuck Schumer, D-N.Y., said in a joint statement Wednesday that they could accept "interim emergency legislation" with $250 billion for small businesses, as Mnuchin requested. However, they said they wanted half of that sum "channeled through community-based financial institutions that serve farmers, family, women, minority and veteran-owned small businesses and nonprofits in rural, tribal, suburban and urban communities."

The Democratic leaders said they also wanted this week's bill to include another $100 billion for health care, $150 billion for state and local governments, and a 15% increase to the maximum food stamps benefit.

The Paycheck Protection Program was meant to incentivize struggling small- and medium-sized businesses to continue paying workers and providing benefits through partially forgivable loans to cover salaries, insurance, rent and other costs. Employers with fewer than 500 workers would be forgiven the amounts they put into payroll costs and mortgage payments and interest for eight weeks after loan origination, with some limitations. This forgiveness is also available to businesses that rehire workers who have already been laid off.

As Republicans discussed new funding for that program, Senate Democrats on Tuesday proposed a "Heroes Fund" that would give up to $25,000 to "frontline workers," a category they want to cover everyone from doctors, nurses and home health aides to grocery store clerks, truck drivers and mass transit employees. It would include government employees at all levels, including Transportation Security Administration officers. It would not cover anyone teleworking from home. Their proposal also would give a $15,000 recruitment bonus to new health care providers, home health workers and first responders.

Update: This article was updated with the joint statement from Pelosi and Schumer.

Correction: A previous version of this article misstated the maximum amount of the small-business loans, which is $10 million. The error has been corrected.