Law360 (May 20, 2020, 11:57 AM EDT) -- The U.S. Department of Labor unveiled a final rule on Wednesday that lets employers offer workers with "fluctuating workweeks" bonuses and hazard pay, saying the regulations free businesses up to explore new ways of paying those workers amid the ongoing pandemic. 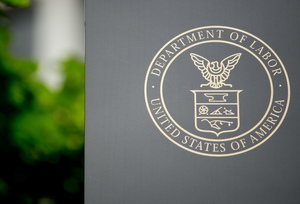 The DOL unveiled a final rule Wednesday that revamps existing framework for how overtime is calculated. (Andrew Harrer/Bloomberg via Getty Images)

The rule revamps the DOL's existing regulatory framework for how overtime is calculated under the Fair Labor Standards Act for salaried workers who aren't exempt from overtime and whose hours vary every week.

The rule expressly gives employers the green light to give workers incentive-based payments like bonuses, hazard pay and commissions on top of the fixed weekly salaries those workers get, with the DOL saying that such payments "are compatible" with the fluctuating workweek overtime calculation method. The rule also says that employers must include those added payments in the calculation of a worker's so-called regular rate of pay as required by the FLSA.

Cheryl Stanton, administrator of the DOL's Wage and Hour Division, said in a press call with reporters that the rule gives businesses "flexibility" as they try to navigate the various issues caused by the coronavirus pandemic.

"For employers and employees managing the challenges of COVID-19, the rule … enhances flexibility to provide hazard pay and promote health and safety in the workplace by promoting flexible work schedules with staggered start and end times, and implement social distancing in the workplace," Stanton said.

In a subsequent written statement, Stanton said the rule will provide "clarity" for businesses that are "looking for new ways to better compensate their workers" but that have long faced uncertainty about whether bonuses could be paid to workers with fluctuating workweeks.

The fluctuating workweek formula for employers whose workers' hours vary widely from week to week lets businesses pay overtime hours at diminishing rates as long as they pay workers a minimum base salary, regardless of how many hours they work. The method makes employers pay out overtime hours at half of a worker's "regular rate," the base wages employers multiply by one-and-one-half when paying overtime.

Echoing Stanton's remarks, the DOL said in the preamble of Wednesday's final rule that it believes the new framework will allow businesses and their workforces "to better utilize flexible work schedules," which is of particular importance for individuals going back to work after the COVID-19 pandemic.

The agency noted that some businesses will "likely" promote social distancing in part "by having their employees adopt variable work schedules" and potentially staggering their shifts.

"This rule will make it easier for employers and employees to agree to unique scheduling arrangements while allowing employees to retain access to the bonuses and premiums they would otherwise earn," the agency said in its rule.

The final rule largely tracks a proposed version that the DOL put out late last year that would undo a 2011 Obama-era regulation meant to block businesses from shorting workers by shifting the bulk of their base salaries into bonuses. The rule is awaiting publication in the federal register and will take effect 60 days after it is published.

The DOL noted in Wednesday's rule that it proposed a "similar clarification" regarding the interplay between the fluctuating workweek method and incentives in 2008 during the George W. Bush administration, but that the rule issued by the DOL in 2011 didn't adopt the 2008 version's language, ultimately leading courts to interpret the Obama-era rule "in different ways" that resulted in "inconsistent holdings."

The Labor Department's latest regulation finalized a standard that is "substantially similar" to the 2008 rule, it said.

Also, the DOL reserved a portion of its latest rule to respond to several of about three dozen public comments regarding the rule after it was proposed, including some that were critical about the fluctuating workweek method.

For example, a group of 18 state attorneys general that included Maura Healey of Massachusetts, Letitia James of New York and Josh Shapiro of Pennsylvania had said in comments that the rule "runs counter to the remedial purpose of the FLSA," will hurt employees by forcing them to work more to earn less and will result in "confusion" among employers who operate in states that either bar businesses from using the fluctuating workweek method or limit its use.

"The signatory states are concerned that the proposed rule will create incentives for employers to reduce fixed weekly salaries while increasing weekly work schedules and to shift a large portion of wages into bonus and premium payments to reduce costs," the state AGs wrote in their comment letter to the DOL. "These incentives will likely lead employers to increase their use of the FWW rule and in doing so, will fail to comply with local laws that either do not allow the FWW rule or allow it only within the narrow bounds of the precedent the department now seeks to overturn."

Similarly, the National Employment Lawyers' Association, a professional organization that represents plaintiffs side attorneys, said in its own comment letter that the rule would essentially allow employers to shift any pay workers receive above the minimum wage into non-guaranteed bonuses and incentivizes employers to make workers work more overtime.

"Congress intended the FLSA to accomplish two goals: protect individuals from long hours of work, and to incentivize employers to spread employment to avoid the high cost of paying time-and-a-half overtime premiums," NELA said in its comments. "The department's proposal directly conflicts with both goals."

In response, the DOL said in part that any "increased use" of the fluctuating workweek method as a result of the regulation "will not conflict with the purposes" of the FLSA and that the new regulation in fact "furthers" the goal of the statute's overtime requirement.

The agency also pushed back against the assertion that the "inverse relationship" between workers' regular rate and their hours under the fluctuating method cuts against the FLSA's purpose and will lead to people working more to earn less.

"While the overtime premium per hour decreases as hours increase, the employer must still pay an overtime premium that is designed to discourage overtime work and spread employment, and the total amount of overtime premium an employer owes continues to increase as hours increase," the DOL said. "The department notes that the payment of hours-based bonuses to employees compensated under the fluctuating workweek method — which this final rule clarifies is permitted — may diminish or even eliminate the inverse relationship between hours worked and the regular rate that commenters find objectionable."

Labor secretary Eugene Scalia said in a statement that the rule is indicative of the DOL's push toward lessening "unnecessary regulatory burdens" on businesses.

"Because of the clarity provided by this rule, employers will know they can pay workers' bonuses in a broader range of circumstances," Scalia said. "This rule comes at a time when millions of Americans are returning to work and will benefit from added flexibility in compensation."

Epstein Becker & Green PC's Paul DeCamp, a former WHD administrator, told Law360 on Wednesday that the preamble of the DOL's 2011 rule created a risk of litigation that essentially forced employers to have to choose between maintaining their use of the fluctuating workweek or continuing to pay bonuses, commissions and other types of nonsalary compensation to certain employees.

"It was one or the other but not both unless companies wanted to run the risk of facing this issue in court," DeCamp said. "Now, with the department's clarification on these issues, employers can be confident that they can provide these other types of pay, this additional money, to their salaried, nonexempt [employees] without jeopardizing the fluctuating workweek."

Update: This story has been updated with more details about the rule and with comments from Paul DeCamp.