Law360 (June 12, 2020, 9:31 PM EDT) -- As the coronavirus pandemic decimates government revenue across the globe, new taxes on digital commerce — once mostly a focus in Europe and other countries with large markets — are emerging in the developing world. 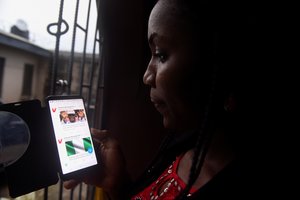 A mobile phone user in Lagos, Nigeria's largest city. A new law in that nation draws online sales under the auspices of its tax system. (Getty Images)

Kenya and Nigeria are the latest countries to explore online taxation, despite threats from the U.S. to retaliate with tariffs against taxes it views as targeting American tech companies. The two African nations join more than a dozen countries around the world that have enacted or proposed similar taxes since France and the U.K. passed digital services taxes last year.

The growing number of countries interested in internet taxation complicates already strained negotiations at the Organization for Economic Cooperation and Development to craft new rules for taxing the online economy.

"Governments cannot wait," said Susana Ruiz, a tax expert at Oxfam International. "There is a sense that this is the time to move on that."

Digital services taxes — typically levies on revenue from online activities that relate to consumers or users in given jurisdictions — grew out of years of public frustration over perceived tax avoidance among large multinational corporations in the tech sector. With more and more commerce happening online, through direct sales or more enigmatic transactions like data collection, an increasing amount of revenue is generated outside the traditional tax rules. Furthermore, many of the same companies' business models rely on valuable intellectual property, which can be more easily moved from jurisdiction to jurisdiction in a pursuit of the lowest tax rate.

But these issues were largely seen as a problem in Western countries, or emerging markets such as India or Brazil. Developing countries, without the mass of consumers, still dealt with tax avoidance, but the most-discussed issues involved the pricing of commodities and the use of management fees and other tactics to shift income from mining and other extractive industries.

That dynamic may be changing as the pandemic continues to shine a light on the digital companies that everyone now relies on for basic needs.

"You have all of this discussion about these companies that were completely untaxed or undertaxed," Ruiz said. "And then there's the sense that digital companies are the winners of the pandemic."

The pandemic is also forcing cash-strapped tax administrations to get creative in how to operate, like everyone else, from a safe distance.

"I think they see it as an easy way to collect taxes cheaply during an era when we have to limit physical audits and visits to taxpayers," said Attiya Waris, a law professor at the University of Nairobi.

"With the fast advancement in technology, many business transactions are increasingly being carried out through digital platforms," Yatani said in the budget statement. "In some cases, due to the nature of the transactions, it is difficult to effectively tax the income derived through such platforms. It is therefore necessary to provide a framework that will facilitate taxation of such income."

In January, Nigeria enacted a law declaring that companies with a "significant economic presence" — including that through online sales — are taxable under its normal income tax system. This mechanism, often called a digital permanent establishment, contradicts the traditional nexus rules, which are normally treaty-based and apply only when a company has a physical presence.

Both digital services taxes and digital permanent establishment rules were included as options in an OECD 2018 interim report on new rules for the online economy, but the organization did not recommend either as it seeks to form a consensus by the end of 2020, the deadline set by the Group of 20 advanced economies.

Kenya and Nigeria follow India, Indonesia, Mexico and Thailand, which have all enacted some form of digital taxation in 2020.

As a levy on revenue, the digital services tax straddles the line between an income tax and consumption tax, which may be part of its appeal. Most countries in Africa and throughout the world have adopted some form of value-added tax, and have systems in place to collect it.

"Given the depressed economic times and the fact that most large online service providers earn substantial revenues in Africa, it is fitting to introduce such a regime in line with most African countries' destination and consumption-based VAT systems," Seelan Moonsamy, a tax manager at ENSAfrica, a law firm based in South Africa, wrote to Law360.

In January, the U.S. Trade Representative's Office found that France's levy discriminates against U.S. taxpayers, a determination that allows the administration to retaliate with tariffs or other economic measures. On June 2, the office announced it was opening investigations of several countries' digital services taxes, including India and Indonesia.

The U.S. threats occur as the OECD is locked in an apparent standstill over a potential digital tax solution. The organization's leadership has proposed a broader new form of taxation that would allow companies to tax a portion of the income from companies that sell into their jurisdiction, or use their markets for online revenue. The tax would apply regardless of whether the taxpayer is physically present, opening the door to online taxation while not targeting digital transactions specifically. While the U.S. initially expressed some support of the plan, Treasury Secretary Steven Mnuchin announced opposition in a December letter.

At the time, no country had begun to collect digital taxes, with France agreeing to a delay to 2021 while the OECD's project continues. But with many countries' digital services taxes now enacted, the balance in the negotiations may have shifted.

"The assertiveness on these policies is requiring some countries to pay attention to them, more than they might otherwise have," said Daniel Bunn, an analyst at the Tax Foundation, a conservative-leaning economic research group in Washington, D.C. Bunn co-wrote an analysis of digital services taxes around the world.

Even advocates of digital services taxes concede that they would not raise much revenue compared with the overall tax base.

They may be more important symbolically, according to the African Tax Administration Forum, which will soon unveil model legislation for the policy.

"While the revenue raised would not be large for most African countries, a DST could have other benefits," the Forum said in a recent policy brief. "Much of the recent public concern about the undertaxation of multinationals has focused on high-profile digital companies that do not have a physical presence in countries. … By taxing these companies, a DST could improve public confidence in the fairness of the tax system, which is an important factor underlying voluntary compliance."