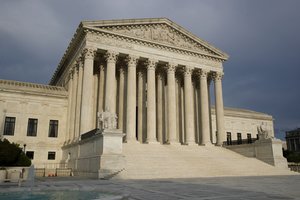 "[Democrats] defend the ACA as good policy, citing the current pandemic," Thursday's brief said. "Not only are those policy arguments incorrect, but they miss the point. Policy considerations cannot create Article I [legislative] power."

That was a reference to congressional taxing power, which the Supreme Court in 2012 cited to uphold the ACA's individual mandate to maintain health insurance. Now that Congress has eliminated the mandate's tax penalty, the mandate is unconstitutional, and the mandate's importance means the whole ACA also has to be struck down, the Republican attorneys general wrote Thursday.

Texas Attorney General Ken Paxton and fellow Republican AGs launched the case in 2018, and they have won support from the Trump administration, which also filed a brief late Thursday. The administration Thursday reiterated its prior position that "the entire ACA ... must fall," but that relief should be limited to ACA provisions that injure state and individual plaintiffs — something that the administration says will require further proceedings in district court.

The administration, which didn't mention the pandemic in its brief, has faced harsh criticism for backing the ACA challenge amid the coronavirus crisis. During a health care speech on Thursday in Pennsylvania, former Vice President Joe Biden, the presumptive Democratic presidential nominee, accused President Donald Trump of a "heartless crusade to take health care protections away from American families."

The case's individual plaintiffs filed a separate brief Thursday that also scoffed at Democrats for spotlighting COVID-19, which has killed roughly 125,000 Americans and infected almost 2.5 million citizens, according to Johns Hopkins University.

"The entire ACA must fall — any 'extratextual considerations' about politics or pandemics notwithstanding," the individual challengers wrote, partially quoting from the Supreme Court's recent majority opinion on sex discrimination. That opinion was joined by Chief Justice John Roberts, who is seen as a potentially pivotal swing vote in the ACA case.

The ACA broadly prohibits higher premiums or denials of coverage based on preexisting conditions, which could include coronavirus complications. Before the pandemic, the law was already helping to cover about 20 million Americans via private insurance and Medicaid. A huge increase in unemployment resulting from the coronavirus outbreak has caused ACA enrollment to swell to 23 million, the left-leaning Center for American Progress estimated Wednesday.

The ACA challenge has little support on the merits outside of conservative legal circles, and some right-leaning scholars, economists and state attorneys general have pressed the Supreme Court to reject it. Even the Trump administration initially supported the case only to the extent it would scrap the individual mandate and protections for Americans with preexisting conditions.

The issue that is perhaps most likely to decide the case is the legal doctrine of severability. Here, the doctrine asks whether Congress would have wanted the ACA to remain on the books without the mandate, should it be deemed unconstitutional. Democrats have argued that Congress spoke loud and clear when it declined in 2017 to repeal the ACA and then settled for changing the tax penalty to zero.

The Republican attorneys general on Thursday rebutted that contention, observing that Congress in 2010 called the mandate "essential" to attracting enough paying customers to make the ACA's preexisting-conditions protections financially sustainable for insurers.

"Without the mandate, Congress determined, these major reforms do not work," the GOP attorneys general wrote.

The Supreme Court agreed to resolve the litigation after the Fifth Circuit deemed the mandate unconstitutional but punted on the rest of the case and told a Texas federal judge to reconsider a ruling that concluded the entire ACA should be invalidated.

Oral arguments in the case could happen as early as October, shortly before the Nov. 3 presidential election.

The petitioner states are represented by their respective attorneys general, led by the California Attorney General's Office.

The House is represented by Munger Tolles & Olson LLP, the Constitutional Accountability Center and the Office of General Counsel for the U.S. House of Representatives.

The respondent states are represented by their respective attorneys general, led by the Texas Attorney General's Office.

The respondent individuals are represented by the Texas Public Policy Foundation and Consovoy McCarthy PLLC.

The federal government is represented by the U.S. Department of Justice.