Law360 (July 8, 2020, 7:47 PM EDT) -- Michigan's governor vetoed a package of bills Wednesday that sought to defer payment deadlines for sales, use and income withholding taxes and property taxes amid the COVID-19 pandemic, saying the measures would create cash-flow issues for local governments. 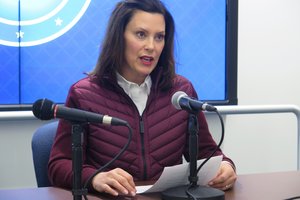 Michigan Gov. Gretchen Whitmer vetoed a series of bills that would extend the payment deadline for various state taxes because of the novel coronavirus pandemic. (AP)

Democratic Gov. Gretchen Whitmer said in her veto messages that local governments could ill afford to go without their share of sales, use and income taxes for a prolonged time. She also raised constitutional concerns about the property tax relief bills' provisions that would have counties rely on short-term financing to help municipalities stay afloat during a delay in collections until next year.

The state Legislature passed the bills overwhelmingly in late June. Three bills — S.B. 935, S.B. 936 and S.B. 937— would allow businesses that have been hampered by COVID-19, the respiratory illness caused by the novel coronavirus, to enter into payment plans for sales, use and income withholding taxes due in March through August. Under those measures, monthly and quarterly filers could pay those taxes in installments, with the final payment due Nov. 20.

Whitmer said in her veto message that the Senate bills would overlap with the state Department of Treasury's current payment plans for certain sales, use and income tax withholding periods through June.

"These bills would not only wreak havoc on local budgets, but also frustrate these ongoing efforts to provide tax relief while maintaining revenue," Whitmer's veto message on the Senate bills said.

Regarding the property tax bills, Whitmer said that the measures' requirements for counties to finance advance payments to their cities and towns that matched the amount of deferred property taxes could run afoul of certain state constitutional provisions limiting the government's ability to borrow money.

Whitmer said in her veto message on the House bills that she agreed with local officials and the education community "that these bills create more problems than they solve."

The state Legislature is controlled by Republicans. Although they don't hold a veto-proof majority, all the measures passed with well more than the two-thirds majority needed in each chamber to override a veto.

However, the primary sponsor of the property tax bills, Rep. James Lower, R-Cedar Lake, told Law360 that he has already been working with Whitmer's office to pass a follow-up measure that addresses the governor's constitutional objections to those bills.

Lower said that Whitmer's administration didn't raise any constitutional concerns with the bills until they were up for final passage. Although he disagrees with the governor's position on the bills' constitutionality, he said lawmakers would likely pass a similar bill, S.B. 943, when they return later this month that Whitmer will sign instead of attempting to override her veto of the property tax bills.

In addition to providing tax relief for businesses and residences, Lower said in a statement that the bills would also delay property tax payments for those affected by flooding caused by dam failures in May.

"We don't feel like the constitutional problems are real," Lower, who is also vice chairman of the state House Tax Policy Committee, told Law360. "But this is a really important issue. I want to make sure people get this relief."

Dan Papineau, director of tax policy and regulatory affairs for the Michigan Chamber of Commerce, which backed the five bills, told Law360 that the measures would have provided a lifeline to businesses that were ordered to stay shuttered to curb the virus' spread.

"When you've been closed for almost an entire calendar quarter and you haven't made any money, it shouldn't be a surprise that you don't have any revenue to pay your taxes," he said.

Papineau said that the sales, use and income withholding tax bills would have added two more monthly periods to the state's existing payment plans for the current fiscal year, noting that Michigan's new fiscal year begins Oct. 1 instead of July 1, as in many states. He said he was puzzled that Whitmer cited the state's existing payment plan program and potential budget crunch problems for municipalities in her reasons for vetoing those bills.

"State government has a lot more tools at their disposal to address cash-flow issues than an individual business on Main Street," he said.

The office of Sen. Curt VanderWall, R-Ludington, who is a sponsor of the sales, use and income tax withholding bills, did not respond to a request for comment.

Whitmer's office did not respond to a request for comment.