By Chris Villani
Law360 is providing free access to its coronavirus coverage to make sure all members of the legal community have accurate information in this time of uncertainty and change. Use the form below to sign up for any of our daily newsletters. Signing up for any of our section newsletters will opt you in to the daily Coronavirus briefing.


Law360 (July 10, 2020, 12:13 PM EDT) -- A suit by Harvard and MIT challenging a new Trump administration policy barring foreign students from the U.S. if colleges offer online-only instruction during the COVID-19 pandemic will be decided July 15, after the schools told a judge Friday that briefly pausing the directive to buy time won't work. 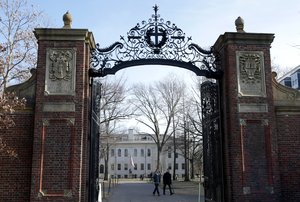 Harvard and MIT said Friday that delaying their suit over the new policy would have disastrous effects for colleges and students. (Photo by Jonathan Wiggs/The Boston Globe via Getty Images)

U.S. District Judge Allison D. Burroughs said she will hear arguments from the Massachusetts universities and the government on Tuesday afternoon, then rule the following day.

Harvard lawyer Bill Lee of WilmerHale told the judge Friday that the breakneck pace of the suit — which was filed July 8, two days after the policy went into effect — is necessary. Simply stalling the directive for a couple of weeks would have disastrous effects for both colleges and students if it were then allowed to be implemented later in the summer with the academic year fast approaching, Lee said.

"Recognizing it places some burden on your honor for sure, we really need to have a decision by the 15th," he said.

The 15th is the date the Trump administration set for colleges and universities to let U.S. Immigration and Customs Enforcement know what their plans are for the fall semester.

In addition to the looming deadline, Lee said "decisions need to be made about what courses are going to be offered and folks need to decide, quite honestly, what country they're going to pursue the next year from."

Putting a two-week freeze on the government policy would put students and schools "on the brink" of classes without knowing whether international students are going to be allowed into the country, Lee said.

Under the aggressive briefing schedule, the federal government will respond to the Harvard and MIT complaint by mid-day on Monday. A response from the schools is due by noon Tuesday ahead of a 3 p.m. Tuesday hearing.

When the case convened on Thursday, Judge Burroughs floated the notion of a temporary restraining order to allow for a more complete record to be developed by both sides, but assistant U.S. Attorney Rayford Farquhar proposed the faster timeline Friday morning and Lee quickly agreed.

A number of colleges and universities around the country have signaled support for the Massachusetts schools, and Lee envisioned as many as nine amicus briefs being filed. Judge Burroughs asked that any briefs from other schools be limited to 15 pages.

"I don't mind putting in the hours over the weekend and through the 14th," Judge Burroughs said. "I'm envisioning that there could be thousands of pages of reading in order to do this properly. I'm just worried about whether it's humanly possible."

The University of California, Princeton, Georgetown and Yale are among the schools who have vocally opposed the government's newly unveiled policy regarding international students.

Judge Burroughs left open the possibility that she could issue an order on the 15th with a more fulsome memorandum to follow at a later date. She said she did not need as much briefing on whether the students would face "irreparable harm," one of the two prongs needed to satisfy the requirement for a preliminary injunction. Whether the case is likely to succeed on the merits may be the closer call, the judge suggested.

The directive at the center of the litigation was revealed Monday, hours after Harvard announced it would limit on-campus living to 40% and hold all courses online, while MIT announced a hybrid model.

In their suit, the schools claim there is no basis for the sudden change. They say it is creating confusion for students trying to arrange travel to the U.S. during a pandemic and seems to be an effort by the administration to pressure schools into opening their physical doors in the fall.