By Y. Peter Kang
Law360 is providing free access to its coronavirus coverage to make sure all members of the legal community have accurate information in this time of uncertainty and change. Use the form below to sign up for any of our weekly newsletters. Signing up for any of our section newsletters will opt you in to the weekly Coronavirus briefing.


Law360 (July 27, 2020, 9:57 PM EDT) -- As part of a $1 trillion coronavirus relief package unveiled Monday, GOP lawmakers floated a bill that would erect significant legal barriers for individuals wishing to sue over COVID-19 infections and deaths, requiring plaintiffs to prove both gross negligence and a failure to comply with public health guidelines. 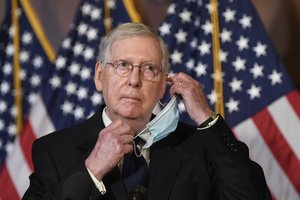 Senate Majority Leader Mitch McConnell in recent months has described the liability shield for businesses and health care providers as a "red line" issue for the next relief package. The bill, dubbed the Safe to Work Act, contains five primary hurdles for workers, customers and patients wishing to sue businesses and health care providers over coronavirus-related injuries.

Under the proposal, all coronavirus-related personal injury and medical malpractice suits will fall under the jurisdiction of federal courts. The bill would also require plaintiffs to not only establish a business was grossly negligent or engaged in willful misconduct, but also that it failed to make "reasonable efforts" to comply with applicable public health guidelines. In addition, all such cases would be subject to limitations on noneconomic damages such as pain and suffering.

McConnell said Monday the proposed liability protections will allow employers, health care providers and schools to spend the next few months "actually reopening rather than fighting for their lives against frivolous lawsuits."

The Kentucky Republican added, "We'll preserve accountability in the event of gross negligence or intentional misconduct, but we are not going to let trial lawyers throw a party on the backs of the front-line workers and institutions who fought this new enemy on the front lines."

But advocacy groups representing workers, consumers and plaintiffs attorneys have criticized the prospect of a liability shield for businesses, saying the proposal is "morally reprehensible" and could cause an increase in infections.

If businesses know they can't be sued over coronavirus-related infections, they will have no incentive to implement proper COVID-19 safety protocols, according to Robert Weissman, president of nonprofit consumer advocacy group Public Citizen.

"There is a certainty that if this proposal moves forward, there will be more needless endangerment of workers," Weissman said during a July 20 call with reporters. "The deterrent effect of these lawsuits … can't be overstated."

The Republican bill would require a plaintiff to establish gross negligence defined as a "conscious, voluntary act or omission in reckless disregard" of a duty of care. Nearly every state among the dozen or so that have passed some form of COVID-19 immunity, by law or executive order, has provided the caveat that cases of gross negligence aren't covered.

While some plaintiffs attorneys have said the gross negligence standard is too high a bar to prove for most cases, some lawyers specializing in nursing home negligence say the higher standard can be overcome. The pandemic has continued to ravage U.S. nursing homes, causing more than 38,000 deaths, according to government data.

"There is still exposure for nursing homes," Tara Devine of Salvi Schostok & Pritchard PC, an Illinois-based attorney specializing in nursing home negligence cases, said earlier this month. "Do I like the fact that we have to prove a higher standard? Of course not. But it's not impossible. After doing a thorough investigation that shows a nursing home was negligent and a patient died, I think they can and should be held responsible for that."

Monday's proposal states that not only does a plaintiff have to establish that a business or health care provider was grossly negligent, but also that it did not make "reasonable efforts" to comply with applicable federal or state public health guidance. This means a grossly negligent defendant can possibly escape liability if it can establish it simply tried, but failed, to comply with coronavirus safety measures.

Public Citizen's Weissman said this is problematic because safety standards issued by federal agencies such as the Centers for Disease Control and Prevention make clear they are only recommendations, not mandates.

"They do give some general guidance on what employers or businesses should do, but the key elements of those guidelines are recommendations," he said. "You don't actually have to do the thing that the CDC is talking about to be in compliance with the guideline itself."

If enacted, the immunity proposal would bar noneconomic damages, such as pain and suffering, unless a plaintiff can prove a defendant committed willful misconduct. The bill defines willful misconduct as an act taken intentionally to achieve a wrongful purpose or the disregard of a known or obvious risk "that is so great as to make it highly probable that the harm will outweigh the benefit."

In addition, punitive damages would only be available in cases of willful misconduct and cannot exceed the amount of compensatory damages, according to the bill.

While tort reform advocates have argued that limiting personal injury damages would achieve the goal of lowering health care and insurance costs, critics contend such limitations deprive individuals of their constitutional rights, such as the right to a jury trial.

A number of state high courts have agreed and struck down such legislative caps. Most recently, the Oklahoma Supreme Court in April 2019 found that the state's $350,000 cap on noneconomic damages in personal injury cases unfairly reduced damages awards for a certain group of individuals, namely those who suffered catastrophic injuries.

The bill also mandates that any civil suit seeking damages for virus-related injuries and deaths be filed under a federal cause of action and, while suits can be filed in state courts, the defendants will have the right to remove any COVID-19 injury case to federal court.

Proponents have argued such a requirement sets a uniform, national standard that allows large, multistate companies such as Walmart and McDonald's to better handle litigation across the country.

Tort reform advocates have previously pushed for various state tort claims to be subject to federal jurisdiction due to its defendant-friendly summary judgment standard, but are often met with resistance from trial attorneys who argue such requirements step on states' rights under the 10th Amendment.

Critics have also argued such efforts usurp the authority of state courts and that many torts should remain within the province of state law and any given state's jurisprudence, which has evolved over time.

Under the bill, individuals have one year from the date of "actual, alleged, feared or potential for exposure" to file a civil suit.