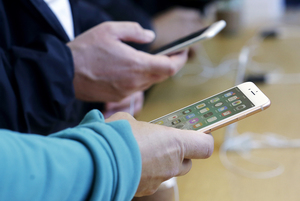 An Eastern District of Texas jury said Apple willfully infringed patents related to 4G LTE in a dispute over the use of the technology in the iPhone, iPad and Apple Watch. (AP Photo/Jeff Chiu, File)

The Eastern District of Texas jury said Apple failed to prove any of PanOptis' challenged patent claims are invalid, and then said Apple willfully infringed the patents. The $506.2 million number is a royalty for past sales, according to the verdict form.

"We thank the jury for their time but are disappointed with the verdict and plan to appeal," Apple said in a statement. "Lawsuits like this by companies who accumulate patents simply to harass the industry only serve to stifle innovation and harm consumers."

Corporate representatives for PanOptis and attorneys for both sides didn't immediately respond to requests for comment Tuesday.

Optis Wireless Technology LLC, PanOptis Patent Management LLC, Unwired Planet LLC and other related companies had accused Apple of infringing five patents by offering 4G LTE capability on the iPhone, iPad and Apple Watch. PanOptis has said it tried to get Apple to take a license, but that Apple didn't make a good-faith effort to negotiate.

U.S. District Judge Rodney Gilstrap oversaw the seven-day trial, which he'd cleared despite Apple's protests that it was still unsafe to proceed during the coronavirus outbreak. The judge had said the court was mitigating the public health risk by sanitizing facilities daily, and requiring face shields, temperature checks and a restricted number of attorneys seated at counsel table. He also allowed some witnesses to testify from Europe over video.

"The task of balancing very real public health concerns against the right of the parties to resolve their far-reaching disputes is a challenge this court has not sought and does not relish," the judge had said in July. "However, as Robert Frost admonished in A Servant to Servants, 'the best way out is always through.'"

PanOptis had been in a similar patent fight with Huawei, which ended in a post-trial settlement in February after a $13.2 million judgment in PanOptis' favor.