NYC Department Store Century 21 To Wind Down In Ch. 11

By Vince Sullivan
Law360 is providing free access to its coronavirus coverage to make sure all members of the legal community have accurate information in this time of uncertainty and change. Use the form below to sign up for any of our daily newsletters. Signing up for any of our section newsletters will opt you in to the daily Coronavirus briefing.


Law360 (September 10, 2020, 11:02 AM EDT) -- Manhattan-based department store chain Century 21 sought bankruptcy protection in New York on Thursday, reporting more than $156 million of debt obligations and saying it was driven into a shutdown by its insurers' failures to pay $175 million in claims stemming from the COVID-19 outbreak. 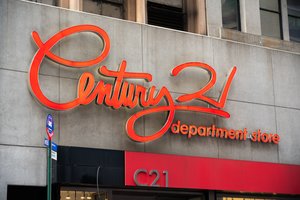 Department store chain Century 21 filed for bankruptcy protection Thursday, saying it would be winding down operations at its 13 stores in four states. (Photo by Alex Tai/SOPA Images/LightRocket via Getty Images)

The company reported that it already has begun wind-downs and closings at its 13 stores in four states, including its downtown New York flagship store, which opened in 1961 and was rebuilt after being damaged in the 9/11 terror attacks on the city.

Company Chief Financial Officer Norman R. Veit Jr. said in a case-opening declaration in the U.S. Bankruptcy Court for the Southern District of New York that Century 21's liabilities include about $56.3 million in asset-based lending debts under agreements now in default, along with more than $100 million in general unsecured debts.

Century 21 co-CEO Raymond Gindi said the company had $350 million in coverage under policies for business interruption and damage, but insurers "repeatedly requested irrelevant or duplicative materials and refused to make any meaningful payments."

"While insurance money helped us to rebuild after suffering the devastating impact of 9/11, we now have no viable alternative but to begin the closure of our beloved family business because our insurers, to whom we have paid significant premiums every year for protection against unforeseen circumstances like we are experiencing today, have turned their backs on us at this most critical time," Gindi said in the statement.

According to a court filing, the company is carrying out store closing efforts with the help of liquidation sale consultant Hilco Merchant Resources LLC, and aims to complete the process by Nov. 30.

The debtor plans to remove a pending New York state court lawsuit against its insurance carriers to the bankruptcy case and intends to ask the court to rule on the dispute in an expedited manner for the benefit of its creditors, the statement said.

"While retailers across the board have suffered greatly due to COVID-19, and Century 21 is no exception, we are confident that had we received any meaningful portion of the insurance proceeds, we would have been able to save thousands of jobs and weather the storm, in hopes of another incredible recovery."

Founded in 1961 by Al and Sonny Gindi, Century 21 is still a family-run business with 13 stores in New York, New Jersey, Pennsylvania and Florida. It provides off-price designer merchandise for its customers and grew into a fashion mainstay in Manhattan, earning mentions on popular television shows including Sex and the City.

Veit said that the company had begun exploring strategic alternatives before the pandemic for its business as a result of changing consumer practices and shifts from traditional brick-and-mortar stores to online alternatives. Disruptions triggered by COVID-19 and the company's inability to raise the estimated $75 million needed to keep the business running led it to Chapter 11.

At the time of the bankruptcy filing, the company employed about 1,390 people, including 1,250 in full-time positions. Nearly 1,000 are represented by the United Food and Commercial Workers Union.

Although the business had furloughed much of its workforce during the height of the nation's COVID-19 restrictions, many had returned to work by the time of the decision on the business wind-down.

The case is In re: Century 21 Department Stores LLC et al., case number 20-12097, in the U.S. Bankruptcy Court for the Southern District of New York.

Update: This story has been updated with more details.