These Law Firms Had The Most Hires, Exits In 2020

By Xiumei Dong
Law360 is providing free access to its coronavirus coverage to make sure all members of the legal community have accurate information in this time of uncertainty and change. Use the form below to sign up for any of our weekly newsletters. Signing up for any of our section newsletters will opt you in to the weekly Coronavirus briefing.


Law360 (January 5, 2021, 4:38 PM EST) -- While the coronavirus pandemic has forced many law firms to scale back on recruiting, lateral partner hiring has remained active for several highly profitable law firms as they seized the unexpected opportunity to poach experienced attorneys from rivals.

There were 2,904 total lateral partner moves across the U.S. from Jan. 1 through Nov. 30 of 2020, down by nearly 24% compared with 3,817 lateral hires during the same period the year before, according to data provided to Law360 by Firm Prospects LLC, a legal industry data company.

However, Firm Prospects' data revealed that several firms have continued to add sizable numbers of lateral partners despite the overall slowdown. Firms such as Lewis Brisbois Bisgaard & Smith LLP, King & Spalding LLP, DLA Piper, McDermott Will & Emery LLP, Cozen O'Connor and FisherBroyles LLP are at the top of the list.

Lewis Brisbois and DLA Piper, however, are also among the firms that saw the most partner departures in the first 11 months of 2020, along with Kirkland & Ellis LLP, Boies Schiller Flexner LLP and Holland & Knight LLP, according to the Firm Prospects data. 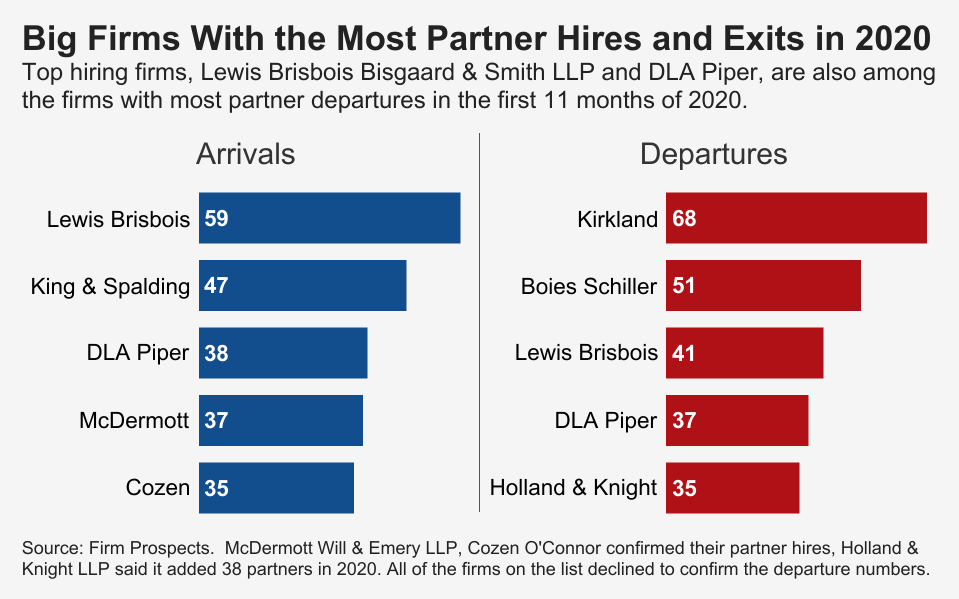 Firm Prospects gathered information from about 2,200 law firm websites and various other secondary sources to track attorney moves, according to managing director Adam Oliver. The data counted all partner hires, including those who moved from firm to firm or from in-house and government roles, but for purposes of partner departures, it excluded partners who retired or died.

While not all the law firms confirmed their partners' hire and departure numbers, multiple legal recruiters using other data-gathering methods told Law360 that the list is largely in line with what they have seen.

"We're having a similar dynamic in law firms that we're going to see in our own population, which is, unfortunately, the rich are getting richer, and the firms that are not at the elite levels or are at the highest rates are not doing as well as the firms that are at the top of the market," said Natasha Innocenti, a San Francisco Bay Area-based partner at legal recruiting firm Macrae.

Carol Morganstern, a partner at legal recruiting firm Major Lindsey & Africa LLC, said that her firm's data show a 30% slowdown in lateral activities in 2020. However, some of the larger firms, such as Lewis Brisbois and DLA Piper, have continued to grow with a steady stream of partners in the pipeline, she added.

"When the lockdown happened, some firms saw an opportunity to get great talent and continue to push forward, while other firms were a little more conservative and have just now recently decided that they're very interested in seeing lateral partners again," Morganstern said.

Who Has Hired More Partners?

Of the firms that responded to Law360's inquiries, McDermott confirmed that it made 37 partner hires but saw about 20 partners leave its U.S. offices as of Nov. 30. The number of hires in 2020 is slightly lower than the 44 additions McDermott made during the same period in 2019, but still places the firm in fourth place among top growing firms, following Lewis Brisbois, King & Spalding, and DLA Piper, according to Firm Prospects' data.

"We made the leadership decision to continue our recruiting efforts because we didn't want to just hunker down. We wanted to come out the other side of COVID in a stronger, better position than when we entered it," McDermott Chairman Ira Coleman told Law360.

Coleman said that McDermott has added from "up the food chain" firms, including Kirkland, Latham & Watkins LLP, Quinn Emanuel Urquhart & Sullivan LLP and Dechert LLP, to such practices areas as litigation, restructuring, data security and privacy.

"We didn't just add any kinds of partners from these firms. We added practice group leaders or people sitting on their executive committee," Coleman said. "So it's not just quantity, it's the quality of those partners and their teams, and their importance in our strategic power alley practices."

Cozen O'Connor confirmed that it hired 35 partners during the same time frame, including eight partners in bankruptcy practices, eight in business litigation and another eight specialized in corporate law. The Philadelphia-based firm declined to comment on its departures.

Cloud-based law firm FisherBroyles, which was sixth among the top hiring firms, reported adding 45 partners in the United States, while 16 partners have left the firm.

"In 2020, the firm has been a huge beneficiary of the COVID-19 pandemic in that the notion of working remotely has largely been demystified because so many lawyers across the world are now operating in a purely remote environment," said Michael Pierson, managing partner of FisherBroyles' global corporate practice.

According to Pierson, FisherBroyles more than doubled its partner hires in 2020, compared to the 20 partners it added the previous year. As lawyers continue to adapt to the "new normal" of remote working, Pierson said he expects the firm to hire more lawyers in 2021.

"We don't see any signs of recruitment slowing down," Pierson said. "In fact, we're as busy as ever having conversations with new partner candidates."

Holland & Knight, which ranked fifth on the Firm Prospects' departure list, confirmed to Law360 that it had hired 38 partners in the first 11 months of 2020, but declined to confirm its departure numbers.

"The pandemic has caused a number of partners to alter their career plans," the firm said in a statement to Law360. "These involve various circumstances including the opening of boutique practices or moving to in-house legal positions or non-profits. We have also had partners retire, relocate to cities where the firm does not maintain offices, and move to other law firms."

In its statement, the Florida-based firm wished its former attorneys well and added that it expects more lateral partners to join the firm over the next several months.

Other firms have declined to comment on or confirm their departure numbers.

Legal industry observers say they aren't surprised that some large law firms, such as Lewis Brisbois and DLA Piper, have the highest number of lateral partner exits.

"Some of these firms are known for hiring a lot and losing a lot," said Innocenti of Macrae. "For example, DLA Piper has been on this list before. They're very successful in their recruiting, but they are just such a large firm, they do sometimes lose people."

However, there are also "unusual" firms on the list, Innocenti said, noting Kirkland and Boies Schiller.

But "Kirkland is not losing its top talent," Innocenti added, explaining that the firm has long had a trend of hiring partners that are "at the very top of the market" but losing the younger nonequity partners to rival firms.

"Once you make some big hires, it definitely gives a firm momentum and laterals find comfort in a firm that is not only successfully bringing on top talent but retaining them," said San Francisco-based recruiter Avis Caravello, who placed the 13-partner Boies Schiller group at King & Spalding.

In 2020, Boies Schiller added three partners, according to Firm Prospects. However, New York-based partner Lawrence Brandman, the former head of bankruptcy at Lehman Brothers Holdings who joined the firm in July, is reportedly leaving soon, along with the firm's co-managing partner Nicholas Gravante and two other partners, to Cadwalader Wickersham & Taft LLP.

"What the candidates that moved in 2020 have in common is that they solved core needs for their firm that they went to," Morganstern of Major Lindsey & Africa told Law360. Despite the decline in partner hires in 2020, Morganstern and other legal recruiters are expecting the lateral partner hiring to pick up in 2021.

"What firms were looking for before continues to be what firms are looking for now, which are strong partners with great client relationships in growing areas," Morganstern said. "I don't think that will change."