Law360, London (January 15, 2021, 9:53 AM GMT) -- The U.K. Supreme Court ruled Friday that insurers must pay out to hundreds of thousands of companies forced to close during the country's first pandemic lockdown, ruling in favor of the Financial Conduct Authority in a landmark case over business interruption cover. 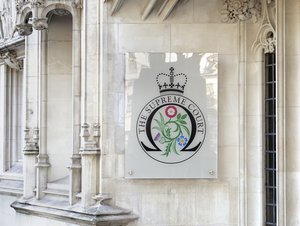 The Supreme Court in London has upheld a ruling from the High Court in September that found largely in favor of insurance policyholders. (Peter Dazeley/Getty Images)

The country's top court upheld a High Court judgment in September that went largely in favor of policyholders, bringing to a close more than six months of litigation and delivering clarity for businesses battered by the pandemic.

The justices also went further and overturned a controversial precedent known as Orient Express that the insurers had relied on in their challenge. Delivering the judgment via video link on Friday morning, Justice Nicholas Hamblen said that the 2010 case decision should be overruled.

"For reasons given when addressing causation and the trends clauses, the Supreme Court concludes that the Orient Express case was wrongly decided and should be overruled," he said.

, held that a company's claim for business interruption coverage can be limited if its turnover would have suffered regardless of the immediate event that forced it to close because of wider circumstances beyond the scope of the policy.

The FCA brought the first-ever test case using the Financial List at the High Court. The City regulator had sought by suing eight insurers with 21 policy wordings to reach an "authoritative declaratory judgment" that would have wide application.

The test case shone a light on so-called non-damage extensions to business interruption insurance. Policies for interrupted business often offer cover only if a company is forced to close as a result of physical damage to a property.

But many insurance policies are sold with add-ons, which provide cover if a business is forced to close because of the outbreak of an infectious disease within a specified radius of a company's premises, typically up to 25 miles.

Many insurers refused to pay out on claims after the country was first locked down in March and the coronavirus outbreak took hold, saying that such policies were not intended to cover global pandemics.

But the High Court largely found in favor of policyholders, ruling that such policies would pay out if it could be proven that there was a single case of COVID-19 within that radius.

The Supreme Court said it disagreed with the reasons behind the High Court judgment, but nevertheless said that insurers should pay out if the "occurrence" of COVID-19 within the vicinity was a cause of business interruption losses.

The justices also went further than the High Court did on the question of when insurance coverage could kick in.

The High Court's decision meant that businesses which closed when the lockdown started could claim on their policy. But those that pulled down the shutters when the prime minister warned that businesses should close — days before legislation for the lockdown was fully passed by Parliament — would have had their payouts significantly reduced.

The Supreme Court, however, concluded that it was "too narrow" for the High Court to say cover should start only when legislation was passed.

"An instruction given by a public authority may amount to a 'restriction imposed' if it carries the imminent threat of legal compulsion," the court ruled.

The FCA also appealed against the earlier ruling that businesses that were allowed to remain partially open — such as a restaurant offering takeaways — were denied insurance under "denial of access" clauses within their policies.

The regulator said that it was a denial of access under the policy wording because customers were unable to enter the dining area of a restaurant.

The FCA said that the insurance claims that would be paid out as a result of the judgment would be a lifeline to small businesses struggling to stay afloat.

"We will be working with insurers to ensure that they now move quickly to pay claims that the judgment says should be paid, making interim payments wherever possible," FCA Executive Director Sheldon Mills said. "Tens of thousands of small firms and potentially hundreds of thousands of jobs are relying on this."

Richard Leedham, partner at Mishcon de Reya LLP, which represented one group of claimants, the Hiscox Action Group, said his clients hoped that insurers would begin paying out on valid claims immediately.

"Customers who have made claims that are affected by the test case will be contacted by their insurer to discuss what the judgment means for their claim," he said. "All valid claims will be settled as soon as possible."

Hiscox, one of the insurers in the case, said that it had begun processing claims.

The insurer also noted that the decision and the latest round of government lockdowns would add an extra $48 million to the amount it would pay out for business interruption claims. It did not give a figure for the full estimate.

Zurich Insurance PLC was represented by Andrew Rigney QC and Caroline McColgan of Crown Office Chambers and Craig Orr QC and Michelle Menashy of One Essex Court, instructed by Clyde and Co LLP.

Update: This story has been updated with additional detail about the decision.