Law360 (February 11, 2021, 5:01 PM EST) -- JDS Development's Manhattan luxury condo tower is facing a series of lawsuits and received a stop work order in late 2020. Nevertheless, sales of residential units have been strong during the pandemic, and work is nearly complete, thanks to help from various law firms.

The 572,348-square-foot tower at 111 W. 57th St., which overlooks Central Park and is also known as the Steinway Tower, is slated to rise to 1,428 feet, making it the tallest U.S. building currently under construction, according to the Council on Tall Buildings and Urban Habitat. The property, which is nearing completion, will have 60 residential units as well as retail space at its base.

Kasowitz Benson Torres LLP has helped JDS with litigation and project matters, while Cohen Ziffer Frenchman & McKenna LLP is also assisting JDS in court. Meanwhile, Kramer Levin Naftalis & Frankel LLP played a significant role in getting the tower entitled years ago, and more than half a dozen other law firms have helped with the project.


The super-slim tower has been rising out of the ground on Billionaire's Row in Manhattan for years, and in 2016 it was the second-tallest tower in New York under construction.

When the pandemic hit in 2020, the tower was already nearing completion, and while construction continued during most of the year, the project attracted additional attention recently due to a series of incidents and lawsuits.

In late October, winds from what had been Hurricane Zeta spun a crane at the top of the tower, and a swinging cable caused debris to fall to the street level. Then, in mid-November, a glass panel fell dozens of stories to the street, and on Christmas Eve, a large section of glass fell from the tower.

The tower has been years in the making.

In order to assemble the project, the developers early on bought the leasehold interest in the site from Steinway, bought the fee interest from Wexford Capital LP and bought the interest in an adjacent lot the venture didn't already own.

Kramer Levin helped the JDS secure entitlement, and partner Valerie Campbell recently told Law360 the most challenging aspect was going through the city's landmark designation process, since the tower sits on the landmarked Steinway Hall site.

Meanwhile, the developers' early lender walked away and Annaly Capital Management Inc. came on board as a new lender, providing $230 million in financing. The developers later scored another $725 million in financing from American International Group Inc. and Apollo Global Management LLC, and with that capital they were able to start construction.

While JDS more recently dealt with the series of incidents at the tower, the firm has also been involved in other litigation, and Kasowitz has scored two victories for the developer.

In late 2019, the law firm helped JDS win a Second Circuit dismissal of Racketeer Influenced and Corrupt Organizations Act and other claims brought by AmBase, which had been an indirect equity investor in the project, as well as other parties. The Second Circuit affirmed an earlier Southern District trial court dismissal from 2018, a matter Kasowitz also helped the defendant with.

And in November 2020, Kasowitz achieved an appellate victory for the property owner in a related dispute. Plaintiffs 111 West 57th Investment LLC, of which AmBase was a part, had alleged the owner of the property aided and abetted breaches of fiduciary duty in connection with AmBase's loss of an equity stake in the project, and the plaintiffs had sought to gain a trust in the tower. A New York Supreme Court appellate division unanimously dismissed those claims. 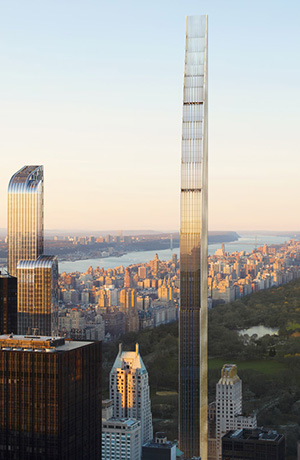 The Steinway Tower, which is nearing completion, will offer views of Central Park from more than 1,400 feet above ground. (Photo credit: JDS Development)

"Following the outset of the pandemic and related court closures, litigation generally was interrupted and slowed, which included the 111 West 57th Street lawsuits," said Tad O'Connor III, a partner at Kasowitz.

"There's always activity behind the scenes, but court activity picked back up relatively quickly and was running virtually once we got into April/May. ... To my knowledge, work on the building continued throughout 2020," O'Connor added.

Meanwhile, in December 2020, JDS was hit with a lawsuit by nearby Central Park Bike Tours claiming negligence on the part of JDS in connection with the spinning crane episode. Central Park alleges it lost various days of business as a result of street closures following the incident.

And JDS is also on the plaintiff side of disputes regarding the project. The company sued contractor Copper Services LLC in December, alleging construction delays and inadequate HVAC work on the part of the contractor.

Even so, sales have continued at a strong clip at the luxury tower during the pandemic.

A listing on StreetEasy shows 10 sales of units at the property since March 1, 2020, with prices ranging from roughly $1.7 million to a whopping $57 million for a penthouse unit. The $57 million penthouse has four bedrooms and more than five bathrooms across 7,130 square feet, according to StreetEasy.

Regarding sales at the tower, Kramer Levin has fielded recent inquiries from would-be buyers. Purchasers of units in tall towers, Campbell said, are perennially concerned that their views may be blocked by future buildings, and potential buyers at Steinway Tower have reached out to the law firm on that point.

"Periodically, we get questions from prospective buyers about the units," said James Power, a partner at Kramer Levin.

JDS Development Group is represented on the project by David Szeker of Kasowitz Benson Torres LLP.

The plaintiffs in the AmBase case are represented by David Thompson of Cooper & Kirk PLLC. The defendants are represented by Tad O'Connor III and Jennifer McDougall of Kasowitz Benson Torres LLP. The case is AmBase Corp. et al v. 111 West 57th Sponsor LLC et al, index number 652301/2016, in the Supreme Court of the State of New York, County of New York.

JDS is represented in its suit against contractor Copper Services by Christopher Johnson of McKool Smith PC and by Robin Cohen and Cynthia Jordano, who were at McKool Smith when the case was filed and are now at Cohen Ziffer Frenchman & McKenna LLP. Counsel information for Copper Services was not immediately available. That case is JDS Construction Group LLC v. Copper Services LLC et al, index number 656912/2020, in the Supreme Court of the State of New York, County of New York.

The plaintiff in the Tour Central Park suit is represented by Gregory Nahas of Pardalis & Nohavicka LLP. Counsel information for JDS was not immediately available. That case is Tour Central Park Inc. v. JDS Construction Group et al, index number 161120/2020, in the Supreme Court of the State of New York, County of New York.

Wexford Capital was represented by Wendy Schriber of Proskauer Rose LLP, who has since retired.

Apollo Global Management was represented by David Broderick, who was at Latham & Watkins LLP when he worked on the deal but is now at McDermott Will & Emery.

Steinway was represented by Jonathan Baumstark, who was at Gibson Dunn & Crutcher LLP at the time of the deal but is now at Riemer & Braunstein LLP.

This is the final article in a series that looked at the tallest towers under construction in five states. The prior article focused on SkyRise Miami.

Correction: An earlier version of this article misstated Christopher Johnson's law firm. The error has been corrected.