How Texas Judges Have Kept IP Trials Moving During COVID 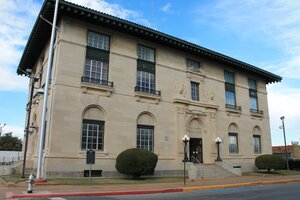 The Paul Brown Federal Building and United States Courthouse in the Eastern District of Texas, where a jury ultimately awarded a $152 million verdict in a trade secrets case that was derailed by the pandemic. (Renelibrary/Wikimedia Commons/CC BY-SA 3.0)

Judges Rodney Gilstrap and Amos Mazzant III of the Eastern District of Texas oversaw two IP trials each last month, the first held in the district since a November trial there resulted in 15 participants testing positive for COVID-19.

Both judges have more planned for April, as does Judge Alan Albright of the Western District of Texas, who also held a trial in March that resulted in one of the largest IP verdicts in history. There were no reported virus issues connected to last month's trials.

Attorneys for the winning sides said the safety measures the judges put in place, as well as cooperation among the trial participants, ensured the cases were able to proceed to a verdict without any COVID-related disruptions.

"I think the lesson is you can run a jury trial in a pandemic if everybody's on the same page, and everybody here was," said Doug Kline of Goodwin Procter LLP, who participated in one of Judge Gilstrap's trials. "It seemed safe, and no issues arose during the trial."

Post-Outbreak Retrial Proceeds Without a Hitch

One of Judge Mazzant's March trials was a retrial of the November case derailed by the pandemic. The second time around, the jury in Sherman, Texas, found Karya Property Management LLC misappropriated software company ResMan LLC's trade secrets, awarding $152 million on March 18.

Cristina Rodriguez of Hogan Lovells, an attorney for ResMan, said the new trial was free of virus-related disruptions and that the safety measures Judge Mazzant put in place proved effective.

"The judge was just very conscious of everybody being safe and well, and I think everybody was trying hard to follow the rules and do their best. I think it was just a very positive experience overall," she said. "It's a great town, and I'd go back there any day, pandemic or not."

The judge used mostly the same procedures at the second trial that were in place at the first, with some additional limits on the number of people who could sit at the counsel table, Rodriguez noted.

Citing privacy, Rodriguez said she couldn't disclose if any of those who tested positive at the first trial were on the ResMan team, but that "we felt very safe and very comfortable, frankly both times."

Judge Mazzant required face coverings for everyone in the courtroom throughout much of the trial, apart from when attorneys were speaking or when witnesses testified behind plexiglass barriers.

"The only two little bubbles where you didn't wear the mask were right around the podium and in the witness box, but everybody else had a mask on the entire time," Rodriguez said.

She added the judge stressed that unmasked attorneys had to stay in place and not walk around the courtroom when they were speaking, and also required masks to be worn when attorneys handed something to the witness and during bench conferences.

Judge Mazzant did not require COVID tests during the eight-and-a-half-day trial, and the ResMan team stated they did not get them, but everyone was nonetheless "extremely careful," Rodriguez said. They all wore masks when working together and agreed to stick to their hotels, workspaces and the courthouse — not going out to restaurants or anywhere else.

"We were really just trying to be conscious of being as careful as we possibly could and being respectful of the process, so that we would maximize our chances of getting to a verdict," she said.

None of the witnesses testified remotely by videoconference, a technique some courts have used during the pandemic, so "other than the masks and the plexiglass, it was like a regular trial," Rodriguez said.

Counsel for Karya Property Management did not respond to a request for comment.

Seeing the Faces of Masked Jurors

The day after the ResMan verdict, an Eastern District of Texas jury in the city of Marshall returned a verdict that Apple infringed a personalized media communications decryption patent and awarded $308.5 million.

Kline of Goodwin Procter, an attorney for PMC, said all of the participants in the trial before Judge Gilstrap worked together to keep it safe.

"I never got the impression that anybody was irritated or impatient or annoyed with the procedures," he said. "Everybody seemed committed to doing what the court wanted us to do to make sure the whole thing proceeded smoothly."

While Judge Gilstrap required face coverings in the courtroom, he "made an express point that he thought it's very important for the lawyers to see the jurors' faces," Kline said. As a result, while attorneys were required to wear masks except when speaking, each juror was given both a plastic face shield and a clear mask and told to wear one or the other or both.

Since it was possible to read the jurors' facial expressions behind the clear plastic, "eventually you could sort of forget about it," Kline said.

While the judge did not require trial participants to be tested for COVID before entering the courthouse, Kline said his team was nevertheless tested every day at their hotel.

"You are working essentially 24 hours a day in close quarters with people," he said. "We just felt as though it would be a comfort level for everyone to get tested every day. Gratefully, nobody had a positive test, and it did give us a level of comfort with one another."

Judge Gilstrap did limit the number of attorneys who could sit together at the counsel table. While that somewhat limited the ability of members of the trial team to talk to one another, they could still communicate electronically, Kline said, adding that "once you understand the rules, you live with them and they're fine."

Counsel for Apple did not respond to a request for comment.

The other high-profile patent trial in March was before Judge Albright in the Western District of Texas, where a jury in Waco on March 2 told Intel to pay $2.18 billion for infringing VLSI Technology circuit patents.

Unlike the Eastern District judges, he required daily COVID tests for attorneys before they could enter the courthouse and encouraged testing for jurors. However, at his next trial, which began April 1 in a patent case against Roku by ESW Holdings, he eliminated the testing requirement.

Judge Albright also provided live audio of the Intel and Roku trials to the public in an effort to limit the number of people in the courtroom. He otherwise used similar procedures to the Eastern District judges, including masks and limits on the number of trial participants.

Michael Smith of Siebman Forrest Burg & Smith LLP, an attorney based in Marshall, said all three judges are planning to hold several IP trials in the near future.

After not holding trials for several months, Judge Gilstrap has been scheduling two a month to get through the backlog that has developed, "so we're seeing lots of activity," Smith said.

Judge Gilstrap had two trials in March and set two trial dates in April, and Smith estimated that two trials might need to be held each month for a few months after that. However, the Eastern District still had more trials on tap a few years ago when it received the bulk of the country's patent cases, he noted. Judge Mazzant has at least one trial scheduled for April, and Judge Albright has two.

Kline said that since the PMC trial concluded, he has heard from a number of colleagues expecting to have trials during the pandemic who were looking for advice on how to manage.

"I've gotten calls from people around the country asking, what was it like? How did you deal with this and that?" he said. "It's an interesting time that we're all trying to figure out."