Law360 (April 16, 2021, 8:17 PM EDT) -- The Middle District of Georgia wrapped a two-day, in-person jury trial without incident on April 13, giving the Georgia federal court system a measure of confidence as courts across the state prepare to resume in-person jury proceedings this month.

U.S. District Judge Tilman E. "Tripp" Self welcomed jurors back to his courthouse in Macon, Georgia, on April 12 for the first time in more than a year. It was the first civil case before an in-person jury held in a Georgia federal court since the beginning of the coronavirus pandemic. One criminal case was held in October before U.S. District Judge Clay D. Land in Columbus, Georgia.

Judge Self told Law360 the two-day trial in his court could not have been a more seamless affair, largely thanks to clerk David W. Bunt, who led the effort to implement pandemic-related safeguards. He said all prospective jurors turned up for selection — many saying they were happy to be doing something normal again — and that proceedings "worked fantastically."

"I was very proud of that," Judge Self said. "We had a great time, it was very efficient, we did not slow down because of COVID-19, it was not cumbersome. The jurors were very complimentary of the process."

Charles H. Morgan of Alston & Bird LLP, a defense attorney in the case, told Law360 the trial went perfectly and the court's "well-oiled machine" for pandemic-era jury trials is something the public can be proud of. He said because people are used to wearing face masks, social distancing and sanitizing, those types of protective measures did not distract participants from the case.

Morgan said he closely watched jurors' eyes during the trial, as their lower faces were masked, but that "wasn't a big deal." He said he was grateful that Judge Self walked counsel through the entire process beforehand, and that it felt refreshing to be back in court with others.

"It was honestly a pretty normal jury trial," Morgan said. "We were very well prepared by the court and I thought that Judge Self's approach to this aspect was very good, that it was sort of like, 'We're all on the same team here — plaintiff, defendant, the court. We're all here to make sure that everything runs smoothly, that the precautions are in place, and primarily to make sure that the jury feels comfortable.'"

Prospective jurors were greeted by clerk staff at the courthouse at staggered times and given packs containing face masks, sanitizing wipes and other personal items, Judge Self said. They had their temperature checked and were ushered while socially distanced into the large ceremonial courtroom for jury selection, where they sat apart in numbered seats.

During voir dire, potential jurors were asked additional questions about their health and exposure to the coronavirus, and once selected they were spaced out within the jury box in Judge Self's courtroom. Because the case was a civil one, he chose seven jurors rather than the 12 required in criminal trials. They still ended up with a "good cross section of the community," Judge Self said.

The only issue he had not foreseen was a Batson challenge over a juror — referring to the U.S. Supreme Court case that forbids the use of peremptory challenges to exclude jurors for racial reasons. Discussion of the challenge required removing the jurors from the courtroom. The judge said he "was sort of thinking on my feet, winging it" and sent the jurors to two different courtrooms. The challenge was easily handled and the trial went on, he said.

Judge Self said for trials with 12 jurors, some will be seated within a courtroom's public gallery. If spectator numbers demand it, an additional courtroom showing live video of a trial will be used to accommodate overflow.

He had transparent plexiglass shields in front of the court reporter, court deputy and witnesses. A large plexiglass shield in front of jurors was removed after opening arguments due to glare, by the jurors' unanimous decision, and lawyers argued behind a nearby lectern.

Judge Self said all court staff involved in jury trials are fully vaccinated and everyone wore face masks, though witnesses and jurors removed them while answering questions. Jurors were allowed out of the courthouse for lunch, as they normally would be.

"With a little bit of planning and some common sense, we can turn the spigot back on," he said.

The lawyers who represented the plaintiff in the trial, Christopher W. Timmons and William Cleveland of Poole Huffman LLC, told Law360 it felt good to be back in a courtroom in front of a jury, though Timmons joked he had to rush out just before trial to buy a new suit after gaining a few pandemic pounds. 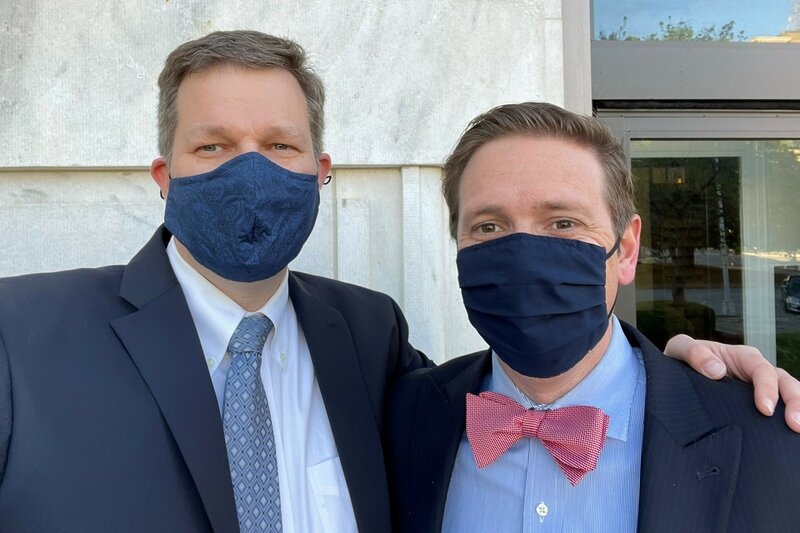 Christopher "Chris" W. Timmons and William "Billy" Cleveland of Poole Huffman LLC snapped a selfie outside the federal courthouse in Macon, Ga., where they represented the plaintiff in the first in-person civil jury trial in Georgia federal court since the pandemic began.

Timmons said Judge Self did a great job of ensuring everyone felt comfortable and proved it is possible to safely conduct in-person jury trials in Georgia federal courts. Cleveland, whose wife is an epidemiologist at the Centers for Disease Control and Prevention, said he was really impressed with the court's safety measures.

"I personally felt very at ease," Cleveland said. "I'm excited because my clients have been waiting a long time."

Cleveland said he preferred jury selection to be held in person rather than over Zoom, where prospective jurors can see themselves and therefore better control their reactions, while also hiding their body language. Timmons said ideally jurors would be maskless during trial, but that it is still better to see half their faces and their body language in-person.

"[The trial] is probably the thing that I've done since getting vaccinated that's most normal, and I feel energized from having gone through it," Timmons said.

Kurt R. Erskine, acting U.S. attorney for the Northern District of Georgia, told Law360 his office has been working for months with federal court staff and defense counsel to ensure everyone feels in-person jury trials are safe and fair for all. He said his prosecutors are ready to get back to doing what they love most about the job — trying cases.

Erskine said it is important to balance the need for jury trials with concerns about the pandemic. He said the district's judges have been considerate not to rush the return of in-person jury trials, especially considering their backlog of cases.

"I think there is no perfect time, but this is a good time to begin this process and I've been impressed by how thoughtful everybody has been in approaching these issues," Erskine said. "We're now in a position where more folks in our office, the courts and frankly the public are becoming vaccinated and I think we have a better understanding of COVID-19 and its transmissibility."

Georgia Jury Trials Will Ramp Up in May

With a civil jury trial already under its belt, the Middle District of Georgia will resume criminal jury trials in May, Chief Judge Marc T. Treadwell told Law360. He said the district has been conducting grand jury proceedings in person at its Macon courthouse for several months now, and based on that he's confident there won't be a problem finding willing jurors for trials.

Feedback from grand jurors has been positive and though some have been excused due to health reasons, none has simply used the pandemic as an excuse to dodge their obligations, Judge Treadwell said.

He said the district has a backlog of criminal and civil cases, but that the workload is manageable and it is unlikely trials will have to be held back-to-back.

The Northern District of Georgia suspended in-person jury trials through May 2, but is allowing a criminal case to be tried a few days beforehand — starting April 27 — before U.S. District Judge Leigh Martin May in Atlanta.

Clerk James N. Hatten told Law360 the district's May trial calendar is filling up as pressure mounts to clear the backlog of cases, and that positive feedback from grand jurors in recent months has boosted confidence among staff. He said prospective trial jurors will be selected in the large ceremonial courtroom of the Atlanta courthouse, with only one jury selection happening at a time to prevent crowding.

Many of the same safety measures are being implemented at all Georgia federal courts, including temperature checks, face masks, social distancing, sanitizing, plexiglass partitions and vaccinated staff.

Hatten said microphones used by jurors in the Northern District will have plastic sandwich bags over them, which will be replaced with each speaker to prevent virus spread. Jurors will be given the option of wearing a clear face shield, also worn by witnesses while testifying.

Counsel will be about six feet farther from the jury than normal and won't be able to pace the courtroom, instead confined to their table or lectern, Hatten said. Jurors will likely deliberate alone in the courtroom and will have their lunches brought to them so they can eat while socially distanced.

Hatten said the Northern District's air filtration systems have also been serviced and that judges are taking time to walk counsel through proceedings during pre-trial conferences. He said the limited feedback the court has received from attorneys indicates they are comfortable with progress.

"I think attorneys feel that it is the right time to return to the courtroom," Hatten said. "Up until now counsel have been reticent, but I think they're ready to go to trial and I think they'll be pleased with the procedures that have been put in place."

Southern District of Georgia acting clerk John E. Triplett told Law360 some cases scheduled for trial in April had preemptively settled, but that a jury trial set to start April 21 before U.S. District Judge Lisa Godbey Wood in Brunswick looked like it would proceed.

Triplett said the district had summoned larger pools of prospective jurors, anticipating pandemic-related issues or excuses. Of the 125 people summoned for the April 21 trial, 18 indicated they had concerns related to COVID-19 and have been excused either for that reason or another, he said.

The Southern District of Georgia has summoned 750 prospective jurors for five trials in May.