Law360 (June 18, 2021, 10:32 PM EDT) -- A Florida federal court on Friday agreed to temporarily block the U.S. Centers for Disease Control and Prevention's pandemic-related restrictions on the cruise industry, ruling that the Sunshine State is "highly likely" to succeed on its claim that the agency exceeded its authority with the regulations. 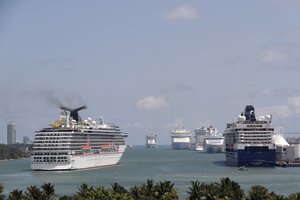 Cruise ships ply the waters of the Port of Miami in file photo. (AP Photo/Lynne Sladky)

In a 125-page order, U.S. District Judge Steven D. Merryday granted the state of Florida's request for a preliminary injunction, agreeing with the state that it suffers "an immediate danger" of a continuing injury fairly traceable to the CDC's regulations. And that danger can be redressed by shutting down the regulations, he said.

Under the injunction, the agency is temporarily prohibited from enforcing its rules against a cruise ship arriving in, within or departing from a Florida port. The judge said, however, that the injunction won't take effect until July 18, when the conditional sailing order will have unwound to be only non-binding "considerations" or "recommendations."

Judge Merryday also gave the CDC until July 2 to propose a narrower injunction permitting cruise ships to sail while remaining within its authority as interpreted by his order.

The judge rejected the CDC's argument that lifting its regulations may not necessarily protect Florida from future injury, given that a new outbreak could amplify that economic harm. The worldwide cruise industry has developed and deployed precautions to combat the virus and contain any infection, the judge said.

That means "no reasonable basis exists to believe that Florida faces a greater or equivalent injury if sailing resumes," according to the order.

The judge also held that the CDC cannot keep unvaccinated individuals from going on cruises, nor can it require a vaccine passport.

Judge Merryday noted that never before has the CDC nor a predecessor detained a vessel for more than 15 months. Nor has it ever implemented a widespread or industry-wide detention of a fleet of vessels in American waters, he said.

"[N]ever has CDC conditioned pratique as extensively and burdensomely as the conditional sailing order; and never has CDC imposed restrictions that have summarily dismissed the effectiveness of state regulation and halted for an extended time an entire multi-billion-dollar industry nationwide," Judge Merryday said.

Florida launched the highly contentious suit in April against the U.S. Department of Health and Human Services, the CDC and top government officials. The state is challenging the CDC's series of "no-sailing" or "conditional-sailing" orders. In particular, the state asked for an injunction blocking the federal agencies from enforcing an Oct. 30 conditional sailing order that established a four-phase process for cruise lines to reopen.

The state argued that the latest guidance from the CDC issued April 2 doesn't allow the industry to take the necessary steps toward reopening and makes clear that the agency "does not intend to proceed with reopening the cruise industry in good faith." Florida also argued that the order is preventing 159,000 Floridians from getting back to work, and that requiring cruise-goers to be vaccinated discriminates against families with children.

The federal government countered that health care officials learned early in the pandemic that cruise ships are uniquely suited to spread COVID-19, due to their close quarters for passengers and crew over prolonged periods.

The government said that federal agencies have had to spend "vast" amounts of resources to evacuate, quarantine, isolate, house and treat passengers, and that the cruise restrictions should remain in place while the "once-in-a-century pandemic" — which has already killed more than half a million Americans and 3 million people around the world — threatens public health.

The states of Alaska and Texas have since filed motions to intervene, throwing their weight behind Florida's argument that the federal cruising restrictions harm their local economies.

Florida Gov. Rob DeSantis hailed Friday's decision as a "major victory," saying in a statement that the CDC "has been wrong all along, and they knew it."

Representatives for the CDC didn't immediately respond to a request for comment late Friday.

The state of Florida is represented by Ashley Moody, John Guard, James H. Percival, Jason H. Hilborn and Anita Patel of the Office of the Attorney General of Florida.

The U.S. government is represented by Brian D. Netter, Eric Beckenhauer and Amy E. Powell of the U.S. Department of Justice.

The case is State of Florida v. Xavier Becerra et al., case number 8:21-cv-00839, in the U.S. District Court for the Middle District of Florida.