Law360 (May 15, 2020, 2:34 PM EDT) -- Citing the compassionate release of former Donald Trump campaign chairman Paul Manafort, a federal judge said Friday that a former NFL lineman should be able to serve the rest of his prison sentence for a $2.5 million real estate fraud scheme in home confinement to protect him from COVID-19. 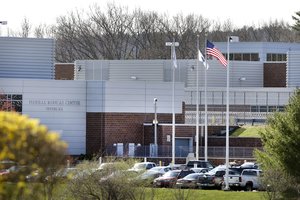 U.S. District Judge Mark L. Wolf's bench ruling puts Robert "Bubba" Pena in line to be released from Federal Medical Center, Devens, the central Massachusetts prison. Pena has argued his age, 70, and the fact he is black make him more likely to face serious complications if he contracted the virus. Pena has pointed to research showing that black Americans are dying at a disproportionately high rate from the virus, likely due to underlying economic and health factors.

According to testimony Wednesday from FMC Devens' warden, Rear Adm. Stephen Spaulding, the Bureau of Prisons did not consider those factors because Pena had not served enough of his sentence to warrant release under guidelines set forth by U.S. Attorney General William Barr.

"As the warden was testifying, the Bureau of Prisons evidently ordered an exception to this requirement for President Trump's former campaign manager Paul Manafort even though he had only served 23 months of a 77-month sentence," Judge Wolf said Friday.

Judge Wolf issued his decision as an "indicative" ruling because Pena had appealed his sentence to the First Circuit. The judge asked the appellate panel to remand the case to him and said he would order a COVID-19 test for Pena. If he is virus-free, he will immediately be released to his Cape Cod home, the judge said.

A BOP official piped up to report that Pena tested negative on Friday morning.

"As the defendant has tested negative for the COVID-19 virus today, I find that there are extraordinary and compelling reasons that warrant allowing Mr. Pena to serve the rest of his prison sentence in home confinement," Judge Wolf said.

The ruling followed more than eight hours of hearings across multiple days. Spaulding testified that Pena would likely be released in July, when he would have served more than 25% of his 32-month prison term and had fewer than 18 months to serve.

Barr issued those guidelines for compassionate release in light of the pandemic, but Judge Wolf pointed out during a hearing Wednesday that there seem to be some exceptions, pointing specifically to Manafort's high-profile release.

"As a practical matter, the issue for me at this point is whether the defendant should be required to remain at Devens until July 2020 and risk being infected by the COVID-19 virus and, if infected, face the risk of hospitalization and the possible risk of dying," Judge Wolf said. "I find that the defendant has proven he should be released now."

Pena will have to stay at home with electronic monitoring until the end of his prison term in January 2022 and then finish his sentence on supervised release. He is still facing a $2.5 million restitution tab, the amount he pled guilty to embezzling in lump-sum payments from borrowers. Pena also lied to the Government National Mortgage Association about the loans' performance to cover his tracks, prosecutors said.

Judge Wolf ordered the electronic monitoring, a relative rarity during the pandemic, because he found that Pena exaggerated his weight when making his bid for release, suggesting he was heavier and that it would increase his chances of serious complications if he contracted the virus.

"Mr. Pena's false statement does not alter the conclusion that a reduction in his sentence is most appropriate," Judge Wolf said. "By virtue of being 70 alone, the defendant is at significant risk of suffering greatly if infected by the COVID-19 virus."

The prison facility where Pena is held has been described as a COVID-19 "powder keg" in a separate suit. As of Wednesday, there were eight reported COVID-19 cases among inmates, and two staff members had also been infected. While those infections are in the medical facility, as opposed to the camp where Pena is housed, Judge Wolf said it's likely the warden's "good luck will not continue and an inmate at the camp will become infected."

Social distancing is not possible at the camp, the judge found, meaning there is a "significant" risk of an infection spreading there.

Pena played for the Cleveland Browns in the 1970s and is a member of the University of Massachusetts Hall of Fame.

The government is represented by Brian M. LaMacchia of the U.S. Attorney's Office for the District of Massachusetts.

Pena is represented by Scott A. Katz of Scott Katz Law.