Riding #MeToo Wave, State Courts Get Their Ships In Order 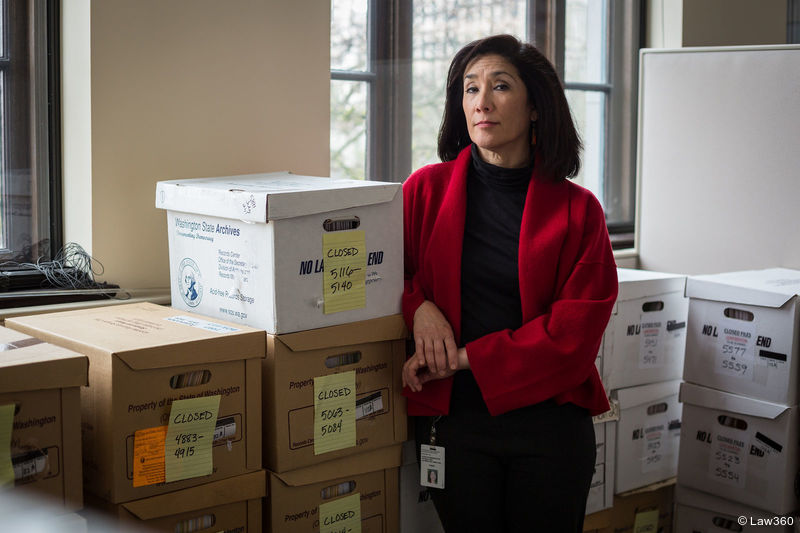 Reiko Callner, executive director of the State of Washington Commission on Judicial Conduct since 2005, in an office in Olympia where about 3,000 closed misconduct files are stored. (Tegra Stone Nuess | For Law360)


If the U.S. federal court system is an ocean liner, the state courts are an entire fleet. Getting them to change course takes time.


Last month, the federal judiciary's policymaking body passed a series of reforms born out of the #MeToo movement that aim to improve reporting procedures and prevent retaliation in instances where court employees have experienced sexual harassment by judges.

There are roughly 2,200 federal judges. But that's a drop in the bucket compared to the 30,000 judges who helm the nation's vast state court systems. These judges, untouched by changes at the federal level, handle more than 95% of the litigation in the U.S. They operate under varying bureaucratic structures and are subject to different levels of public oversight.

All states and the District of Columbia have commissions responsible for policing judicial misconduct, but commissions are sometimes limited in how they can impose sanctions. Most commissions, for instance, only have the authority to recommend removal of a judge for behavior like sexual harassment to the state supreme court, and removals remain a rare outcome in these cases.

With 39 states using public elections at some level of the judicial selection process, oversight can be minimal. As Eric Sanders, the lawyer representing former New York law clerk Tricia Moriates in her pending harassment suit against her former boss, put it: "It has to do with who is reviewing the reviewers."

While publicly available data shows only a small number of state court judges have been sanctioned for sexual misconduct and inappropriate relations with court staff over the last decade, many sources in state court systems across the country suggest the problem is bigger than what the data reveals.

Most state courts are already taking action. A survey by Law360 showed that since the scandal involving former Ninth Circuit Judge Alex Kozinski broke in late 2017, 38 state court systems have updated their policies and procedures for addressing sexual harassment; rolled out related changes, like revamping their training programs and creating groups to study workplace misconduct; or made plans to do so. Ten court systems did not make any changes, and three did not respond to the survey.

Several states are raising the stakes by releasing details of sexual harassment settlements with judges and broadening the definitions of what falls under the umbrella of harassment. They also are taking more thoughtful approaches to how they train judges and staff.

"Federal courts have the benefit of being extremely unified, while the states have a lot more diversity in their structures and cultures, so there is more diversity in terms of their response to these issues," said Marla Greenstein, executive director of the Alaska Commission on Judicial Conduct. 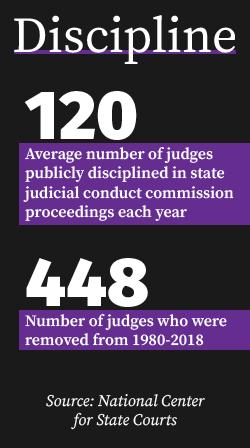 California's Judicial Council, the policymaking body for the state courts, in June 2018 began requiring that any publicly funded settlements involving judicial officers be disclosed in response to public records requests, including deals resolving sexual harassment and discrimination complaints. The rule says judicial officers' names can't be redacted from those agreements.

"Judicial independence relies in part on judicial accountability," California Supreme Court Chief Justice Tani Cantil-Sakauye said in April 2018 ahead of the rule change. "The public has a right to know how the judicial branch spends taxpayer funds."

The Judicial Council released data last spring showing it has paid $521,000 to settle sexual harassment complaints against judges and court employees since 2011 and nearly $80,000 on outside counsel to investigate allegations involving five judicial officers since 2010.

Many state court systems told Law360 they don't track or maintain information on sexual harassment settlement payments or outside counsel fees, but a few disclosed some data.

The Montana Judicial Branch said it paid $40,000 to settle one sexual harassment complaint in 2017, the Wisconsin Court System said one complaint settled for $10,000 in 2013, and the Idaho Administrative Office of the Courts said it hired outside counsel in fiscal year 2018 to investigate one personnel complaint for nearly $8,200. The Administrative Office of Pennsylvania Courts said it didn't spend any money on settlements or outside counsel over the last five years. South Dakota said it has data on settlements and outside counsel, but declined to disclose more details.

On the policy front, some state court systems are taking pains to clarify that harassment of any kind is unacceptable. The Washington Supreme Court's list of prohibited harassment now includes more than 20 categories, from race and gender to HIV status or the use of a service animal.

A month after the state Supreme Court updated its policy in April 2018, all three divisions of the state court of appeals adopted similar policies. And the state Supreme Court's gender and justice commission is in the process of creating a model policy that might be adopted by the entire Washington judiciary — no easy feat for a nonunified court system. 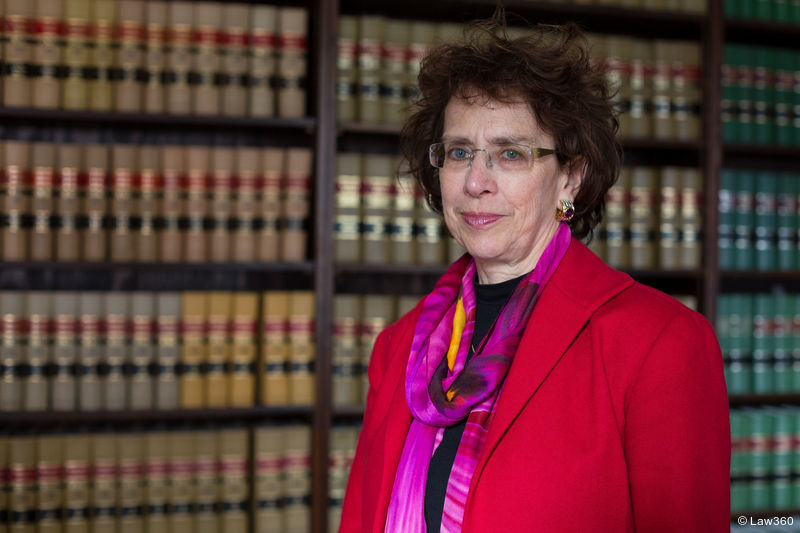 Justice Sheryl Gordon McCloud was elected to the Washington Supreme Court in 2012 after practicing as an appellate attorney for almost three decades. She also chairs the court's gender and justice commission. (Tegra Stone Nuess | For Law360)


The New Mexico Judicial Branch also retooled its policy in November 2018 to recognize that harassment can come in electronic form, including "text messages, emojis, stickers, GIF." And it added language to more closely align its definition of harassment with what's been used by the U.S. Equal Employment Opportunity Commission, prohibiting harassment in about 20 protected categories, including citizenship, genetic information, socioeconomic status and political affiliation.

Meanwhile, state court systems are changing how they go about training judges and employees. The Indiana Judicial Branch is focusing on the need for civility, an approach advocated by the EEOC, which has found sexual harassment is more likely to occur when civility offenses go unaddressed.

"Past sexual harassment trainings often focused on what behavior is illegal," an Indiana Supreme Court spokeswoman said. "But by emphasizing whether the offensive behavior was illegal, employers appeared to condone harassing behavior if it did not expose them to liability."

And the Connecticut Judicial Branch, which used to have an outside vendor provide sexual harassment awareness training, overhauled that practice in the summer of 2018 so that it's conducted by judicial branch employees and includes workplace scenarios directly related to situations in courthouses and other judicial workplaces.

Some have signaled that changes are forthcoming. The Massachusetts Court System, for instance, formed a working group last year, and an amended policy on discrimination and sexual harassment is expected by the end of June. And a California work group was formed in October 2018 with plans to make recommendations on new rules, better training and updated reporting procedures later this year.

WOMEN ON THE BENCH

Another factor that may help state courts tackle sexual harassment is the growing presence of female judges. A quarter of all state court judges in the U.S. were women in 2008, a figure that rose to 33% in 2018, according to the National Association of Women Judges.

Women also are more visible at higher levels. Four state courts of last resort had majority-female benches in 2007, and by 2017, there were 11 – Arkansas, California, Maryland, Massachusetts, Minnesota, New Mexico, New York, Tennessee, Washington, Wisconsin and West Virginia — according to data by the National Center for State Courts.

The old boys' club is starting to include more girls, said Reiko Callner, executive director of the State of Washington Commission on Judicial Conduct.

"With more women in positions of power … we will see some substantive change and institutional change in the official response taken to address issues that primarily affect women," she said. "The willingness to report and the willingness of institutions like ours to take measures – all of us are watching it change."

Even if courts adopt airtight policies and training programs, questions remain about whether complaints will be handled appropriately and offending judges will be held accountable.

In the past, several egregious harassment cases have been met with little to no action by judicial conduct commissions or courts, and victims have been treated with "great disdain," said Lynn Hecht Schafran, director of Legal Momentum's National Judicial Education Program, which promotes equality in the courts.

She pointed to a female court reporter who sued in a Nebraska federal court in 1996 accusing Bryce Bartu, a Nebraska state judge, of repeated sexual harassment, including inappropriate touching. Several female witnesses alleged Bartu also had sexually harassed them over a 25-year period. The Nebraska judicial commission filed a complaint, but the judge was able to take disability retirement, according to Schafran.

The suit eventually settled, with the court reporter receiving $70,000 from the defendants and an agreement by Nebraska that complaints would be promptly investigated. But the court reduced her request for nearly $458,000 in attorneys' fees and costs to about $53,000, calling the matter "only slightly more than a run-of-the-mill case." Her attorney appealed, but the Eighth Circuit affirmed. Bartu died in 2016.

"The court system closed down not just on the victim, but on the lawyer," Schafran said. "One would hope that in the #MeToo years, this type of case would be dealt with more seriousness and attention."

But reforms can't just be about changing the rules on paper, court watchers say. It will be important for judges to show their commitment to improve the work culture, for court staff to be trained on how to respond to misconduct, and for courts to routinely review any changes.

"Courts are always putting policies in place, but they don't always have the time or funds to evaluate them, and that's the critical piece," said Deborah Wood Smith, a senior analyst at the National Center for State Courts.

Many judicial commission leaders are hopeful the #MeToo movement and the recent reforms by federal and state courts will encourage court employees experiencing harassment to come forward and improve how courts and commissions respond.

"We may have to take out a judge or two in extreme cases so that it makes it tougher on the next judge," said David Sachar, head of the Association of Judicial Disciplinary Counsel and executive director of Arkansas' judicial discipline commission. "But I certainly believe the judiciary will be a positive model on how to deal with [sexual harassment]."