By Mike LaSusa
Law360 is providing free access to its coronavirus coverage to make sure all members of the legal community have accurate information in this time of uncertainty and change. Use the form below to sign up for any of our weekly newsletters. Signing up for any of our section newsletters will opt you in to the weekly Coronavirus briefing.


Law360 (July 10, 2020, 8:19 PM EDT) -- President Donald Trump on Friday commuted the sentence of his friend and adviser Roger Stone, who had been ordered to serve 40 months in prison following his convictions for witness tampering, lying to Congress and obstructing probes into Russian interference in the U.S. presidential election. 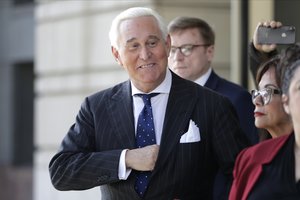 The White House said in a statement that Stone, a self-described political "dirty trickster" and longtime conservative political operative, had been unfairly targeted by political opponents of the president.

"Roger Stone is a victim of the Russia Hoax that the Left and its allies in the media perpetuated for years in an attempt to undermine the Trump Presidency," the statement said. "Roger Stone has already suffered greatly. He was treated very unfairly, as were many others in this case. Roger Stone is now a free man!"

The statement also said the 67-year-old Stone would be at "serious medical risk" in prison.

Stone's attorney Grant Smith of StrategySmith told Law360 on Friday that his client was happy with the grant of clemency.

"Mr. Stone is incredibly honored that President Trump used his awesome and unique power under the Constitution of the United States for this act of mercy," Smith said. "Mr. and Mrs. Stone appreciate all the consideration the president gave to this matter."

Earlier this week, Stone had sought to delay the date he was set to start serving his sentence, telling a D.C. federal appeals court that a district judge hadn't properly considered his susceptibility to COVID-19 when ordering him to report to prison in a matter of weeks, rather than months, as he'd requested.

The DOJ, which had not opposed Stone's request in the lower court last month, reversed course and told the appeals court Thursday that the district judge had appropriately ordered Stone to report to prison July 14. Stone fired back Friday before the announcement of the commutation, calling the reversal "reckless."

"President Trump's unprecedented decision to commute the sentence of Roger Stone, an individual that could directly implicate him in criminal misconduct, undermines the rule of law," the lawmakers said. "By this action, President Trump abused the powers of his office in an apparent effort to reward Roger Stone for his refusal to cooperate with investigators examining the president's own conduct. No other president has exercised the clemency power for such a patently personal and self-serving purpose."

The Trump administration has previously faced criticism from segments of the legal community for appearing to favor the president's friends and allies in aspects of the legal system ostensibly supposed to be free of political influence.

Earlier this year, former employees of the U.S. Department of Justice renewed calls for the resignation of Attorney General William Barr in the wake of the DOJ's move to dismiss a criminal case against former Trump national security adviser Michael Flynn.

A previous, similar letter calling for Barr's resignation was published in the wake of the DOJ's decision in February to seek sentencing leniency for Stone shortly after the president criticized an earlier, stiffer sentencing proposal put forth by government prosecutors.

House Speaker Nancy Pelosi, D-Calif., even came under pressure last month to seek the impeachment of Barr following the controversial ouster of Manhattan U.S. Attorney Geoffrey Berman, which sent shockwaves through the legal community, especially among many former New York federal prosecutors who viewed the incident as harmful to an institution lauded for its integrity.

Friday's commutation comes after Stone pleaded with Trump to grant him clemency. In an interview Thursday with Jim Norton and Sam Roberts on SiriusXM, Stone said he had "grave concerns" about going to prison because people in jail have been infected with COVID-19, and that he was "optimistic" the president would either pardon him or commute his sentence.

Ahead of the official announcement Friday, Trump offered some hope to his longtime friend, telling reporters outside the White House that he was considering letting Stone off the hook.

"I'll be looking at it. I think Roger Stone was very unfairly treated, as were many people," the president said.

Trump made similar remarks in an interview Thursday with Boston-based conservative radio talk-show host Howie Carr Jr. Responding to Stone's recent comment on Fox News that he's "praying" for clemency to avoid prison, Trump told Carr, "If you say he's praying, his prayer may be answered. Let's find out what happens."

Update: This story has been updated with additional comments and background information.