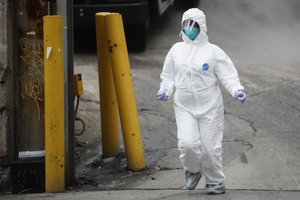 A medical worker wears personal protective equipment due to COVID-19 at the Brooklyn Hospital Center in New York on Thursday. Vice President Mike Pence said federal agencies are reviewing "the feasibility of allowing hospital workers to use cloth gowns for performing procedures" instead of  disposable plastic gowns. (AP)

The Centers for Medicare & Medicaid Services issued emergency waivers Thursday night that created latitude for health care professionals to perform a wider array of services than their qualifications typically allow and practice medicine across state lines via telehealth.

"Doctors can now directly care for patients at rural hospitals, across state lines if necessary, via phone, radio or online communication, without having to be physically present," the agency said in an announcement about the "blanket waivers," which apply nationwide, as opposed to only covering individual states or providers.

Thursday's move builds on waivers that CMS unveiled on March 30. Among other things, the earlier waivers also expanded the use of telehealth and relaxed enforcement of the Stark Law, which restricts doctors from making patient referrals that present financial conflicts of interest.

Generally speaking, the demand for COVID-19 treatment is expected to reach its most pressing point during the next few days. Researchers at the University of Washington are projecting that peak use of hospital resources will occur this weekend, with nationwide demand for hospital beds reaching 95,000, including about 20,000 intensive care beds.

The daily death toll is also anticipated to reach its zenith during the next few days, topping out around 2,200 victims before gradually declining to slightly fewer than 1,000 daily deaths by the end of April.

At a Thursday night briefing, Vice President Mike Pence said "it has been a difficult week" but that there is "evidence of stabilization" and it appears "we are close to the peak."

Signs of the approaching apex were discernible in New York, which has more than one-quarter of all U.S. infections. Although its daily body count has soared to record heights this week — about 800 Empire State residents died Wednesday — Gov. Andrew Cuomo on Thursday reported a deep dip in the use of hospital resources by COVID-19 patients.

As one example, Cuomo said there were about 200 new COVID-19 hospitalizations Wednesday, down from almost 600 on Tuesday and about 1,400 one week earlier.

"All of this data suggests that we are flattening the curve so far," the governor said at a Thursday briefing.

Anthony Fauci, a member of the White House's coronavirus task force and director of the National Institute of Allergy and Infectious Diseases, also singled out New York's numbers on Thursday.

"At the same time as we're seeing the increasing deaths, we're seeing [a] rather dramatic decrease in the need for hospitalizations," Fauci said at the White House.

As of late Thursday, the U.S. had recorded more than 462,000 infections and more than 16,500 deaths from the novel coronavirus, according to Johns Hopkins University. The tsunami of patients has put a strain on hospitals that's been exemplified by shortages of personal protective equipment, such as masks, gloves and gowns.

Pence insisted Thursday that intense efforts are ongoing to secure sufficient supplies. But he previewed a significant workaround, saying that CMS and the U.S. Food and Drug Administration are reviewing "the feasibility of allowing hospital workers to use cloth gowns for performing procedures," as opposed to disposable plastic gowns.

"We're working very rapidly in the next 24 hours, and we'll have guidance for hospitals and health care workers about the ability to, in effect, recycle gowns and make sure that we have the supplies that we need," Pence said.

To the extent progress is being made, it appears to stem largely from social distancing measures that have kept Americans at home and shuttered staggering numbers of stores, restaurants and hotels.

The University of Washington is now projecting that by late May, the virus will have killed about 60,000 Americans — roughly the same number of fatalities that the U.S. suffered during the Vietnam War. That compares to recent Trump administration projections of 100,000 to 240,000 deaths in a best-case scenario over a similar timeline.

"We're looking at a much lower level ... than the level of 100,000," President Donald Trump said at Thursday's briefing.

But the university's projection assumes that "full social distancing" guidelines will remain in effect through May. The White House is currently calling for social distancing to continue only through April, and it is expressing hope that immunity-detection tests will be widely available by early May, allowing many Americans to return to work.

At Thursday's briefing, Trump once again expressed a desire to quickly get the economy up and running again, saying that "hopefully we're going to be opening up … very, very soon."

And while some observers are concerned that the nation could be reeling economically for months or even years, Trump was more optimistic about a strong rebound, saying Thursday that he expects "a big bounce, rather than a small bounce."