Here are three developments to know:

The president, who spoke for 10 minutes Monday evening at the White House, commenced his remarks by saying he receives a small card each day with his schedule and the latest tally of Americans who've been infected by the novel coronavirus or killed by it. 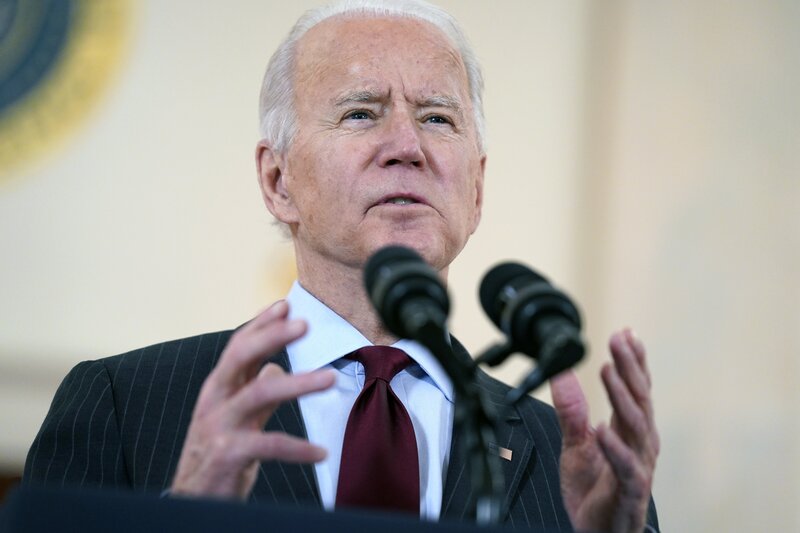 "Today we mark a truly grim, heartbreaking milestone," Biden said before looking down at the card he'd just pulled from his suit pocket. "500,071 dead."

The six-figure toll — which works out to an average of roughly one death per minute over the past 12 months — exceeds the combined combat fatalities that the U.S. experienced during World War I, World War II and the Vietnam War, the president noted.

But the dead are not mere statistics, he added, imploring listeners to remember "the son who called his mom every night just to check in, the father's daughter who lit up his world, the best friend who was always there."

Monday's address was replete with empathy, as the president alluded to his own experiences seeing loved ones die unexpectedly. Biden's first daughter and first wife were killed in a 1972 car accident, and his son Beau Biden, the former attorney general of Delaware, died from brain cancer in 2015.

Biden included practical advice in his remarks as well, urging adherence to social distancing and other preventive steps until most of the population has been inoculated. And he declared that "we must end the politics and disinformation," a reference to how Americans' views of the pandemic have often been colored by their ideological outlooks and news consumption.

Prior to Monday's speech, Biden ordered that American flags on public property be flown at half-staff until sunset on Friday. After the speech, he took part in a moment of silence on the White House's South Portico with first lady Jill Biden, Vice President Kamala Harris and second gentleman Douglas Emhoff, a former DLA Piper partner.

The four wore black face masks, as did the Marine Corps sentries behind them. They stood with bowed heads near staircases adorned with hundreds of flickering candles, and then raised their gazes as an instrumental version of "Amazing Grace" began playing.

"The reason for these guidances is any of these products might be impacted by changes to the virus, particularly their efficacy or their performance," acting FDA Commissioner Janet Woodcock told reporters Monday afternoon.

New coronavirus cases have fallen sharply in recent weeks. But roughly 65,000 new infections are still occurring each day on average — more than the U.S. saw on most days in 2020 — and there are fears that mutated strains of the virus could unleash yet another huge wave of cases.

One of Monday's guidances contained updated standards for obtaining so-called Emergency Use Authorizations for coronavirus vaccines. As one example, the guidance said that a vaccine modified for variants shouldn't see its effectiveness dip more than 10% when compared to an earlier version of the vaccine.

Peter Marks, director of the FDA's Center for Biologics Evaluation and Research, told reporters that clinical trials of modified vaccines would probably need to involve "a few hundred individuals."


That's far smaller than clinical trials for entirely new coronavirus vaccines that haven't yet been authorized. It's possible that the FDA will eventually accept laboratory data, instead of data from human subjects, to establish the effectiveness of modified vaccines, as is typically done with modified influenza vaccines, Marks said.

Two vaccines — one produced by Moderna Inc. and another jointly developed by Pfizer Inc. and BioNTech SE — have won emergency FDA authorization. Agency advisers later this week will discuss a third vaccine candidate from Johnson & Johnson.

With respect to tests, officials were specifically asked if they've seen any issues so far with rapid diagnostics, technically known as antigen tests, which tend to be less accurate even with the now-familiar coronavirus strain.


"At the present time, we haven't seen any signals for adverse impact," Jeffrey Shuren, director of the FDA's Center for Devices and Radiological Health, said.

A number of potentially dangerous coronavirus variants have been identified, including the so-called U.K. and South Africa variants. Woodcock told reporters Monday that the FDA is asking the pharmaceutical industry "to continuously monitor genomic databases for the emerging variants," adding that the agency would do the same.

The White House's COVID-19 response team held a separate briefing Monday afternoon focused largely on vaccine distribution, which has been snarled by a deep freeze that descended on much of the U.S. last week. As one example, federal officials said the average number of vaccine doses administered declined more than 30% last week in Texas, which endured widespread losses of power and water amid plunging temperatures.

The upshot is that "all backlog doses will be delivered by midweek," compared to a prior prediction that it would take until the end of this week to catch up, according to Slavitt.

Every saved day could prove highly significant, given the enormous number of new daily infections and the threat of new variants, which might peter out if enough people are immunized before they become ubiquitous.

It's certain that vaccinations are playing some role in the dramatic decrease in new COVID-19 cases, but there are probably many factors. Rochelle Walensky, director of the Centers for Disease Control and Prevention, said at Monday's response team briefing that average new cases are down nearly 75% since their early January peak and that average daily deaths have dropped conspicuously.

But she noted that the good news was tempered by topping 500,000 deaths. And she added that the half-million fatalities may not fully account for the pandemic's toll, since some deaths have probably been missed and others have resulted from people forgoing important medical care because they were afraid of contracting COVID-19 in the hospital.

"When history writes this, we will understand the mortality related to this pandemic is far greater than the number that we have been counting, for numerous reasons," Walensky said.