Law360 (February 16, 2022, 7:54 PM EST) -- A state judge on Wednesday agreed to consider whether a recent eviction warrant may have been defective — the latest twist in a yearslong battle over a Brooklyn brownstone that has recently drawn attention from New York's attorney general amid allegations of deed fraud.

During a brief housing court appearance, Judge Jack Stoller set a date of Feb. 24 to weigh Crown Heights resident Sherease Torain's claim that a warrant was improperly executed on Feb. 8. Torain is also asking the court's permission to remain at 964 Park Place with her mother, Helen Robinson, while they seek to challenge the validity of a 2015 deed transfer. 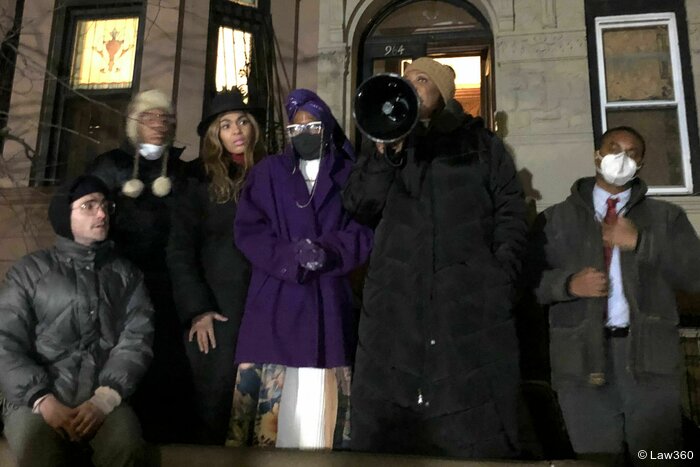 Citing "various directives and orders" pertaining to pandemic-era eviction warrants, Judge Stoller said the properness of the warrant is worth considering.

"It's a narrow issue," he continued. "I'm letting the parties know that this is a thought that I have."

The dispute between members of Torain's family and Menachem Gurevitch, the current owner of the property, originated with a deed transfer in 2015, prior to which Torain says her family had owned the home and lived there for decades.

Yet the case became a neighborhood flashpoint last week, when groups including the Crown Heights Tenant Union and Brooklyn Eviction Defense occupied the stoop at 964 Park Place to protect Torain and her mother against what they deem is a wrongful eviction.

To the chagrin of Gurevitch, the two women are currently inside the home and have participated in court appearances virtually.

The case history between the Torain and Robinson family and Gurevitch is complex, and it stretches back years.

According to a 2017 state Supreme Court order written by Judge Dawn Jimenez-Salta, Torain's grandmother, Ida Robinson, agreed to sell the title to the home in 2015 for $800,000 in order to avoid foreclosure, with an option to buy the property back at a later date if certain conditions were met.

Ida Robinson then "refused to consummate the sale," according to the order, prompting further litigation, a settlement and, concurrently, her transfer of the deed. As a result, Ida Robinson and her family became tenants in what had previously been her property.

Gurevitch has since alleged that the family stopped paying rent in March 2016, resulting in multiple eviction proceedings — including the case at issue today, originally filed in 2018. Gurevitch secured a possessory judgment in January 2020, as well as $279,500 for missed rent stretching back to 2016.

Yet the eviction was subsequently delayed by pandemic-era policies, including a state law that expired on Jan. 15.

David Stern of Stern & Stern Esqs., co-counsel for Gurevitch, expressed frustration in court Wednesday, saying that the family's debt to his client has now ballooned to $460,500, that the eviction warrant was executed correctly, and that it is past the time for Torain and Helen Robinson to surrender the four-story property.

"Respondents who broke back into this house have paid nothing," Stern told the court. "To delay this case any further … is an injustice."

While multiple judges have issued rulings favorable to Gurevitch over the years — including in the case before Judge Jimenez-Salta, which had alleged deed fraud — Torain has maintained that the eviction is based on a deed transfer that was fraudulent. And, that the situation was worsened by inadequate legal counsel.

Adding another layer of complexity, Ida Robinson is now legally an incapacitated person, court records show. Her daughter Helen is her court-appointed guardian, while the Vera Institute of Justice is the guardian of her property.

Counsel for the Vera Institute, Edward Deignan, missed Wednesday's short-notice hearing. He declined to comment when reached by phone.

Meanwhile, Torain and Helen Robinson's allegations of deed fraud have gained traction outside the courtroom.

James' office has since referred Torain to Abrams Fensterman LLP for potential pro bono representation regarding the deed, according to a Tuesday filing by Logan Schiff of Brooklyn Legal Services, Torain's newly appointed counsel in the eviction case.

In his own filing submitted Tuesday, Adam Birnbaum of Abrams Fensterman said that he has reviewed relevant court records and that they "bear all of the indicia" of a scam that typically targets Black, and often elderly, homeowners, in which a deed transfer is pitched as a "refinance of the property, and thereby induces the true owners to execute a deed."

In an emailed statement to Law360 Wednesday, Attorney General James called the ongoing situation at 964 Park Place "deeply concerning," adding that, "My office is looking into the matter."

Another potential wrinkle — raised in court and likely to be discussed at the Feb. 24 hearing — is whether Torain might benefit from an eviction stay that accompanies pending applications to the state's Emergency Rental Assistance Program.

In the near term, Judge Stoller's Wednesday order maintains an uneasy status quo, placing restraints on Gurevitch and his "attorneys, agents [and] employees" ahead of next week's hearing. Tenant advocates say they will keep a presence at 964 Park Place.

"This is a case that has been out there for over six years, and it was only by getting our neighbors together and defending the space that we've been able to get the attention of people who can make the change," Dunn told Law360. "Sherease is not the only one, and she's not the only one we're going to defend when push comes to shove."

The case is Menachem Gurevitch v. Helen Robinson et al., case number 72639-18, in the Civil Court of the City of New York for Kings County.

Correction: An earlier version of the story misstated which day Law360 spoke to Torain. The error has been corrected.