By Christopher Cole
Law360 is providing free access to its coronavirus coverage to make sure all members of the legal community have accurate information in this time of uncertainty and change. Use the form below to sign up for any of our weekly newsletters. Signing up for any of our section newsletters will opt you in to the weekly Coronavirus briefing.


Law360 (March 16, 2020, 11:25 AM EDT) -- The U.S. Supreme Court on Monday put off oral arguments scheduled for the next two weeks, in the federal courts' latest precaution against the spread of the novel coronavirus. 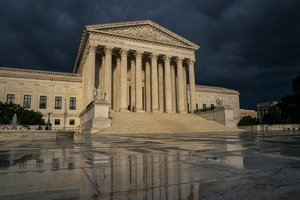 The U.S. Supreme Court said Monday it will postpone oral arguments scheduled for the next two weeks, a decision that will impact several high-profile cases. (AP)

The high court postponed oral arguments calendared for this month's session running March 23 to March 25 and March 30 to April 1.

The court has a number of high-profile cases scheduled during those two weeks, including legal challenges to obtain President Donald Trump's financial and tax records, deportation relief for unauthorized immigrants, the extent to which religious employers are exempt from anti-discrimination laws, the copyright battle between Google and Oracle over the use of copyrighted code in Android smartphones and Delaware's attempt to preserve the state's 122-year-old requirements for major party balance among members of its three top courts.

There was no indication Monday that the delay would affect the May to June time frame for opinions. But it means the high-profile arguments involving Trump's personal finances, already a political hot button, will be pushed further into the thick of election season.

The justices are set to examine a pair of cases focused on whether Trump's financial records must be released. One of them, Trump v. Vance, involves whether the Manhattan district attorney can subpoena nearly 10 years' worth of the president's financial papers and tax returns. And the other, Trump v. Mazars, deals with whether the House Committee on Oversight and Reform can subpoena nearly a decade's worth of his financial and tax records.

The New York legal fight started after District Attorney Cyrus Vance subpoenaed Trump's tax returns, which Trump has declined to release going back to his presidential candidacy because he says they are under audit. In early March, 16 attorneys general, former U.S. Department of Justice attorneys, civil liberty groups and tax practitioners urged the Supreme Court as amici to allow the subpoena.

The other case began when Democrats, after taking the House in 2018, demanded a range of financial records ostensibly tied to their oversight responsibilities, triggering a long fight in the D.C. federal courts. House lawyers told the Supreme Court last month that the records are essential to legislative efforts. Trump has argued the panels are conducting an unconstitutional law enforcement probe.

The deportation-related case, Clemente A. Pereida v. Barr, aims to clarify whether an unauthorized immigrant can qualify for deportation relief following a state conviction when it's unclear if the offense bars such relief under federal immigration law.

The case involves a Mexican father seeking to remain in the U.S. after being convicted of using a fraudulent Social Security card to obtain a cleaning job. U.S. Attorney General William Barr told justices that the U.S. Department of Homeland Security's contention that Pereida's conviction is a crime involving "moral turpitude," a concept that has come under increasing legal scrutiny, is enough to keep the father from qualifying for deportation relief.

In two cases that involve religious employers, Our Lady of Guadalupe School v. Morrissey-Berru and St. James School v. Biel, the justices have been asked to clarify when the so-called ministerial exception to federal employment discrimination law bars courts from hearing suits against religious employers.

A coalition of 17 Democratic state attorneys general recently cautioned the Supreme Court against adopting an expansive view of a legal doctrine that shields religious employers from anti-discrimination laws. The case revolves around the so-called ministerial exception, which shields religious employers from certain workers' claims on the grounds that courts shouldn't second-guess those employers' decisions as to who ministers their faith.

Google's copyright brawl with Oracle has to do with code used in Android smartphones. Numerous amicus briefs have been filed with the Supreme Court on both sides, highlighting the broad interest in the case, which is set to answer novel legal questions about software and copyright law and could have sweeping implications for the technology industry.

Also scheduled for argument in the next two weeks was Carney v. Adams, Delaware's appeal of a lower court ruling that overturned the state's 122-year-old major party membership and balance requirements for members of its three top courts.

James R. Adams, an attorney challenging the state's judicial political parity rule, told the Supreme Court in February that a provision of the state constitution requiring equal representation of parties on the bench is "offensive to the First Amendment." Delaware Gov. John Carney is challenging a Third Circuit ruling that struck down the rule, saying that decision trampled states' rights to decide the qualifications for important government posts.

It was unclear Monday how far the delay could push back the justices' schedule as they take on the closely watched cases.

A Washington, D.C., appellate lawyer said Monday that even though the court rarely closes, the delay of oral arguments was the right move because the safety of the public, justices, court personnel and the advocates must come first.

"The advocates will be able to gear up again once this ends," Brian Matsui, a partner at Morrison & Foerster LLP, said in an email. "And we know the Supreme Court and other courts across the country remain ready to decide cases as they need to, perhaps just on a different pace or with fewer in-person arguments."

The high court said in a notice issued Monday morning that it "will examine the options for rescheduling those cases in due course in light of the developing circumstances" and will still hold its regularly scheduled conference on Friday, though some justices may participate remotely by telephone. The court plans to issue its regularly scheduled order list on March 23.

The oldest member of the Supreme Court, Justice Ruth Bader Ginsburg, turned 87 on Sunday and has a history of health problems, including a cancerous nodule on her lung that she had removed in late 2018.

The court building closed to the public last week, but Monday's notice indicated that official business will continue, with filing deadlines not extended.

"The court is expanding remote working capabilities to reduce the number of employees in the building, consistent with public health guidance," and the building will generally remain closed to the public until further notice, the notice indicated.

Similar precautions were taken in October 1918 in response to the Spanish flu epidemic and for yellow fever epidemics in 1793 and 1798.

"The Supreme Court never disrupts its normal procedures lightly, often staying open and holding arguments as usual even in the most severe weather," Ropes & Gray LLP appellate and Supreme Court chair Doug Hallward-Driemeier said in an email Monday. "As the court noted in its release, it has been over a century since the Supreme Court has decided to take precautions like this, which demonstrates the gravity of the situation, but it is absolutely the right thing to do."

Update: This story has been updated with more details about the postponed cases.