Law360, New York (March 16, 2020, 6:25 PM EDT) -- A founding Fugees member, who is accused of aiding money transfers in a billion-dollar fraud scandal involving 1Malaysia Development Bhd., or 1MDB, showed up in New York state family court in a head-to-toe protective suit for fear of contracting the coronavirus on Monday.

A wide-eyed Manhattan Family Court Judge Carol Goldstein listened as Prakazrel "Pras" Michel — wearing a hooded white Tyvek jumpsuit with blue latex gloves and shoe coverings — swore that he had made a $20,000 child support payment with the help of money loaned by friends, unzipping his protective suit and producing a Moneygram receipt as proof.

Coronavirus fears led Fugees'@PrasMichel to don what the judge deemed "full hazmat gear" in NY court: "To make sure I'm not exposed and I don't expose anyone," Michel said. "Let me step back..." @Law360 (he's there for child support, but DOJ claims he aided a wild 1MDB scheme) pic.twitter.com/vuqL771o2w

"Let me just put on the record," Judge Goldstein said, "the father came to court head-to-toe in full HAZMAT gear," noting he was also wearing a mask, gloves, hood and "booties" over his shoes.

"Should I pull down my scarf?" the musician asked the judge, his voice muffled by the fabric.

Michel explained that he made three payments to satisfy the court's order that he pay off $20,000 of an outstanding $127,000 debt after he was jailed last week over his failure to prove he made the payment. Michel was released after paying $5,000, the judge noted on Monday.

The U.S. Department of Justice froze Michel's assets, which is why the former Fugees member has said he's been late in making child support payments. The DOJ succeeded in pausing that action in January while the criminal case proceeds against Michel.

Judge Goldstein reviewed Michel's Moneygram receipts and was satisfied with the evidence, noting Michel still owed more than $100,000 and was ordered to make another payment of $15,000 by mid-May.

"It looks good to me," the judge said of the payment. 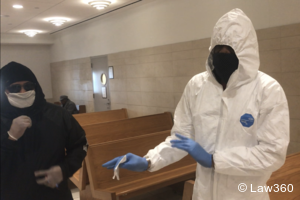 Outside the courtroom, Michel explained his attire.

"See how I'm dressed, right?" Michel told reporters after the hearing. "To make sure I'm not exposed and I don't expose anyone."

"Let me step back," Michel said, backing away with his hands out. "I just want to be careful and mindful of everyone's safety and my son's."