Law360 (March 17, 2020, 2:46 PM EDT) -- All four California district courts have issued orders suspending federal civil and criminal jury trials for weeks throughout the state, and California's Northern District and the Ninth Circuit closed their courthouses to the public Tuesday, after public officials directed locals to "shelter in place" to curb the spread of the new coronavirus.

In the state's Northern District late Monday, Chief District Judge Phyllis J. Hamilton signed an order vacating trial dates scheduled before May 1. The judge also ordered that all civil matters be decided on the briefings, unless the judge believes a hearing is necessary, in which case it would be held via telephone or video conference. The order added that all grand jury proceedings are suspended until at least May 1 as well.

"The court specifically finds that the ends of justice served by ordering the continuances outweigh the interest of the public and any defendant's right to a speedy trial," Judge Hamilton wrote. 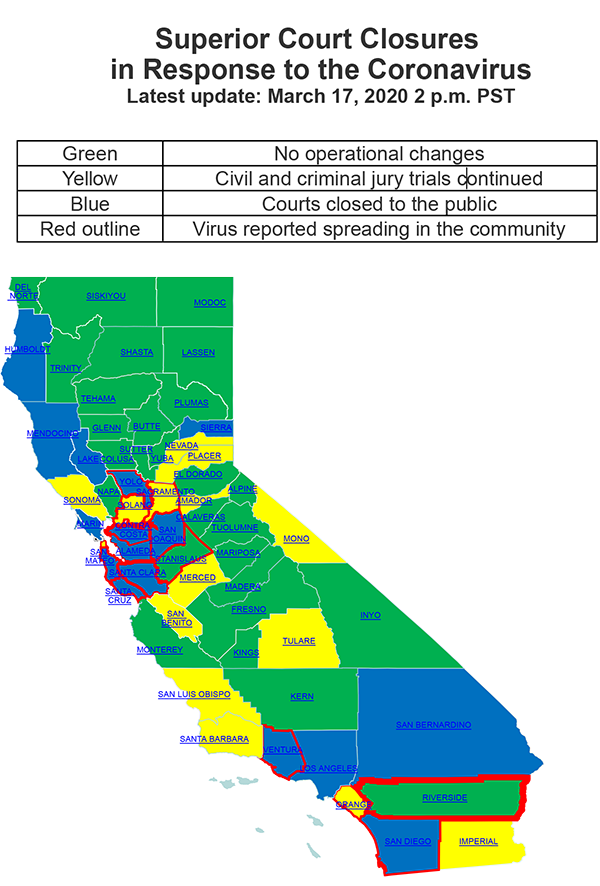 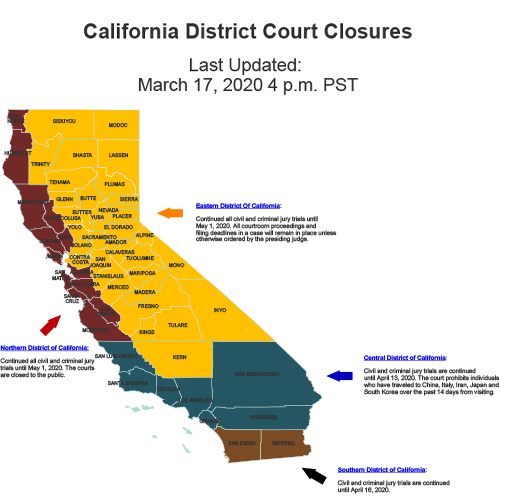 In a second order issued Monday, Judge Hamilton also prohibited the public from visiting federal courthouses unless they have "official court business" that is authorized by a judge.

The Ninth Circuit, meanwhile, issued an order on Tuesday barring anyone except judges and court staff during non-court weeks. The court will decide on a case-by-case basis whether to hold oral arguments, and all of those will be streamed online, according to a notice posted on the court's website. The appeals court also extended some deadlines and asked attorneys to file electronically whenever possible.

The back-to-back announcements were issued hours after public officials in six Bay Area counties, plus Santa Cruz County, demanded that residents "shelter in place" until at least April 7 to slow the spread of the coronavirus.

The Eastern District of California also announced Tuesday that it would continue civil and criminal jury trials until at least May 1, but its courthouses would remain open for business.

As of Monday afternoon, there were 472 positive coronavirus cases in the state and 11 deaths spread across 15 counties in Northern California and Southern California, according to statistics published by the California Department of Public Health.

The shelter in place directive is the most restrictive measure taken yet in the U.S., and violating it is a misdemeanor punishable by a fine or jail time, according to local public officials. The six counties affected are San Francisco, Santa Clara, San Mateo, Marin, Contra Costa and Alameda, which have a combined population of more than 6.7 million.

State courts in Alameda, Santa Clara, Marin and San Mateo counties also announced Monday they would close courthouse doors to the public starting Tuesday, while San Francisco Superior Court said it would close "75% of courtrooms" and continue jury trials. Contra Costa County Superior Court was the first courthouse in the state to shutter its doors Friday.

The wave of closures came after nearly all courthouses in the Golden State resisted closing up shop last week, despite the president's national emergency declaration and despite warnings by state public health officials that the coronavirus was actively spreading through multiple densely populated California counties.

On Friday afternoon, only one state courthouse said it would close due to the coronavirus, but by Tuesday morning, the California Supreme Court and multiple state courts in the Bay Area and Southern California — including Los Angeles Superior Court — did an abrupt about-face and announced widespread closures.

The state high court issued an order Monday suspending all in-person oral arguments and moving all hearings to San Francisco, which would remain open to the public.

The Ninth Circuit also said Monday it would close its courts to the public but that it would stream any hearings online. The federal appeals court said the court is evaluating hearings that are currently scheduled over the next three months "one at a time" and will issue orders in those cases giving direction to the parties.

Outside of California, other federal courts, including the U.S. Supreme Court, have either closed or restricted public access to courthouses in coronavirus hot spots across the country. On Monday, the Second Circuit and New York's Southern District also announced that they would close courthouse doors to most of the public in response to fears about the global pandemic.

U.S. Citizenship and Immigration Services also said Tuesday it would close its offices in San Francisco and San Jose until April 6.

The cases impacted by the orders include a trial pending before U.S. District Judge William Alsup over criminal hacking charges against Russian national Yevgeniy Nikulin and a trial set to begin April 6 over claims by American Eagle pilots that their union treated Trans World Airlines pilots preferentially after American Airlines' acquisition of TWA.

On Monday, Nikulin's defense team asked Judge Alsup to delay the trial, which began March 10. The defense team argued that the prosecution's witness, Secret Service Special Agent Richard LaTulip, had potentially been exposed to the coronavirus and could put the public at risk. Judge Alsup agreed to postpone the trial for three days while he considered the defense team's request before Judge Hamilton's orders were signed.

Update: This story has been updated to include details on the suspended trials, information about the Ninth Circuit's closure to the public, USCIS office closures and the Eastern District of California's announcement and updated statistics from the California Department of Public Health.