Law360 (March 24, 2020, 6:43 PM EDT) -- New Jersey's Republican lawmakers called on the governor Tuesday to extend the state tax return filing deadline, even with the state facing big revenue declines from the efforts to help mitigate the effects of the novel coronavirus. 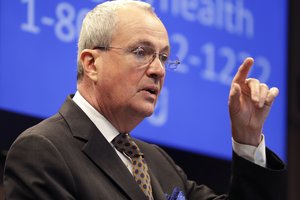 "With the disruptions caused by the coronavirus outbreak and Gov. Murphy's subsequent executive orders, it is only right and fair that the tax filing deadline be extended," Peters said in a statement. "Taxpayers in New Jersey should not be penalized by their government over the imposition of stay-at-home orders and business closures that they have no power to change."

Bucco, one of the sponsors of the legislation, said with April 15 just three weeks away, the bill would extend personal income and corporate income tax deadlines to whatever the federal deadline were to change to, but no later than the last day of New Jersey's fiscal year, June 30. U.S. Treasury Secretary Steven Mnuchin announced last week the department would push back national tax filing deadlines to July, which would set New Jersey's deadline to June 30 if the bill became law.

"The extension is warranted and necessary, especially for taxpayers who may end up owing a tax payment to the state," Bucco said.

Alyana Alfaro, a Murphy spokeswoman, told Law360 on Tuesday that the governor's office doesn't comment on specific or pending legislation.

Richard McGrath, a spokesman for Senate President Steve Sweeney, D-West Deptford, said the state Senate and Assembly both voted to approve the bill but deferred comment to the governor's office on whether Murphy would sign it. McGrath declined further comment.

Danielle DeSisto, a spokeswoman for Assembly Speaker Craig Coughlin, D-Woodbridge, said the purpose of the legislation is to support people who may be facing financial challenges as a result of COVID-19. She deferred further comment to the governor's office.

"To the extent that states can match the extended federal filing and payment deadlines, they should," Walczak said. "If states fail to adjust their own tax deadlines, they eliminate the benefit of the federal extension for their taxpayers, who must do most of the work on their federal returns to be able to file in their own state by an earlier deadline."

"Still, New Jersey needs to pay its bills," Walczak said. "Most states believe they can do this while aiding taxpayers by moving the filing deadline. For New Jersey, that is a question the governor will now have to answer."

"Paying their taxes is the furthest thing on the minds of people," Bracken said. "And quite frankly, it would kind of pour a little salt in the wound right now to make tax payments when a lot of people are concerned about their own personal or business cash flow."