By Dylan Moroses and Andrew Kragie
Law360 is providing free access to its coronavirus coverage to make sure all members of the legal community have accurate information in this time of uncertainty and change. Use the form below to sign up for any of our weekly newsletters. Signing up for any of our section newsletters will opt you in to the weekly Coronavirus briefing. 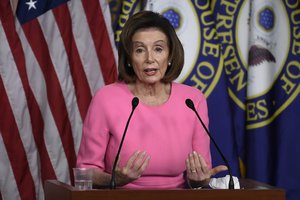 The House will take a voice vote on H.R. 748, the Coronavirus Aid, Relief and Economic Security Act, the third measure directed at mitigating the economic downturn and health care crisis brought by the new coronavirus, Pelosi told reporters.

The legislation is intended to help millions of unemployed workers survive a public health crisis that has rapidly shuttered entire sectors of the American economy and pushed health care providers nearly to capacity while treating COVID-19, the illness caused by the coronavirus.

The bill would provide roughly $250 billion in direct payments to most Americans, help businesses meet payroll, prop up state and local relief efforts and even correct aspects of the 2017 tax law, according to a bill summary.

"We'll have a debate, and then we'll have a voice vote. I do not think there's a need for anything else," McCarthy said.

The nonpartisan congressional Joint Committee on Taxation came out Thursday with an estimate of the budget impact: about $591 billion over the next decade.

Pelosi said she would recommend that lawmakers remain on call after the bill is sent to President Donald Trump's desk in case Congress must pass further legislation to address the coronavirus crisis. Pelosi, D-Calif., said a fourth bill should be developed by the leaders of the House and Senate in unison, not by one chamber exclusively.

Pelosi said she would want a fourth bill to include "a better definition of who qualifies for family and medical leave" along with more stringent Occupational Safety and Health Administration workplace standards, presumably to cover health care workers on the front lines, a goal of Senate Democrats.

Coronavirus patients should also receive free medical care in addition to the free testing provided by a previous relief package, she said.

She said she did not want patients to face high co-pays or deductibles, suggesting Democrats would want to exempt coronavirus-related health care from any cost sharing.

The fourth package should also provide more money for food stamps, more help for state and local governments and perhaps additional direct payments to Americans, Pelosi said. Democrats also want to address pensions, Pelosi said, though she did not give details.

Pelosi unveiled legislation on Monday reflecting her party's priorities in addressing the coronavirus, which included several additional tax provisions not in H.R. 748.

For example, under Pelosi's bill, hospitals would receive payroll tax credits to offset the cost of equipment they acquire as well as the charity care they provide to patients suffering from the virus. The earned income tax credit would also be expanded to childless workers, and the credit would be permanently expanded to Puerto Rico. Pelosi's legislation would also double the value of the child tax credit and expand it to Puerto Rico.

The measure would set aside $150 billion for states and localities whose tax revenues would be affected by moving the federal tax filing date from April 15 to July 15. The bill also includes $130 billion to help hospitals, nursing homes and other health care facilities weather the crisis, according to the summary.

The bill would also provide that businesses can carry back losses from 2018, 2019 and 2020 for up to five years. In addition, net operating losses temporarily would not be subject to a taxable income limit, which means they could fully offset income.