The Pandemic's Impact On Pending M&A

By ​​​​​​​Morgan Hollins, Luke Laumann and Gregory Pryor
Law360 is providing free access to its coronavirus coverage to make sure all members of the legal community have accurate information in this time of uncertainty and change. Use the form below to sign up for any of our weekly newsletters. Signing up for any of our section newsletters will opt you in to the weekly Coronavirus briefing.

Unsurprisingly, the number of deals declined at an accelerating rate throughout the quarter as the pandemic worsened, with volume in March at only about half the level it was in January. 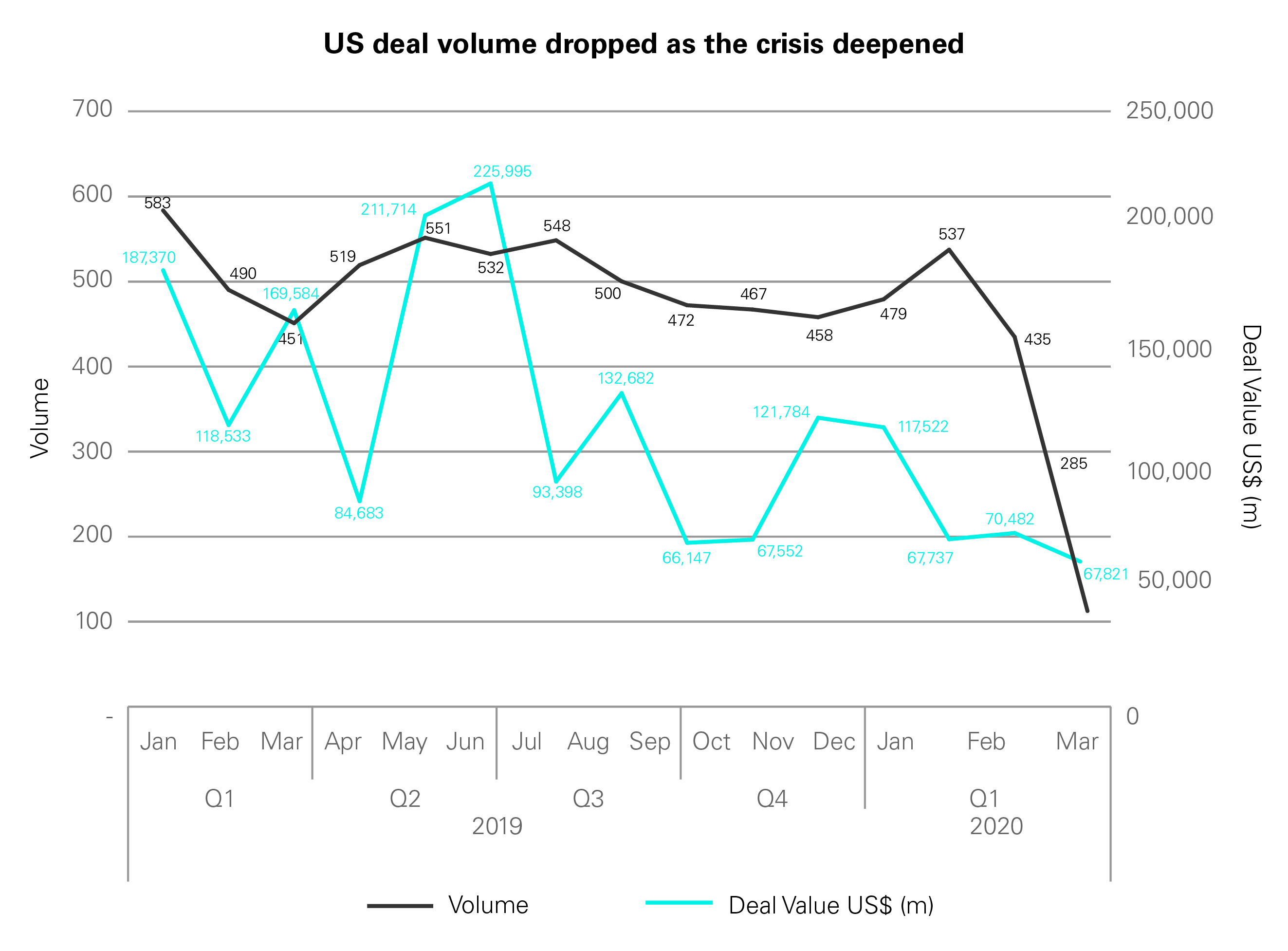 Just considering large deals, there were 57 announced M&A transactions that were valued at $1 billion or more and that involved a U.S. acquirer or target in the first quarter of 2020. Six of these transactions have already closed, and 49 are currently pending without publicly announced changes to their terms.

That leaves only two large transactions that are already terminated or in dispute this year. The $6.4 billion merger of Woodward Inc. and Hexcel Corp. was mutually terminated without liability. BorgWarner Inc.'s $3.3 billion acquisition of Delphi Technologies is in dispute, with BorgWarner delivering notice of breach and asserting that it has the right to terminate the agreement if the breach remains uncured.

Will the number of delayed, disputed, renegotiated or terminated deals increase?

Several factors could affect the outcome of pending transactions, the most obvious of which include the duration of the COVID-19 pandemic, related remedial measures (including social distancing measures), and the resulting market volatility and macroeconomic trends. The longer these effects last, the greater the likelihood that parties will seek to delay, renegotiate or terminate pending transactions.

With that in mind, we are monitoring changes to pending transactions to understand which strategies have yielded desirable outcomes and the factors that have influenced them. Of course, actions taken in connection with any deal are affected by the particular facts and circumstances of the deal and the companies involved.

We have seen a number of actions taken in response to the current market situation, most prominently including the following.


On what bases are buyers terminating or delaying transactions?

We have reviewed press releases, U.S. Securities and Exchange Commission filings and court filings to get a sense of the variety of justifications asserted by buyers to support their decisions not to close transactions due to the COVID-19 pandemic. Five reasons currently stand out (though, again, actions taken in connection with any deal are affected by the particular circumstances of the deal and the companies involved).

Like the defendant in Cooper Tire, buyers may argue that the ordinary course covenant is a concept completely separate from an MAE. However, sellers may try to point to dicta in the Cooper Tire decision supporting the position that operational changes made in response to the COVID-19 pandemic are not breaches of the ordinary course covenant if the effects of COVID-19 are carved out of the definition of MAE.

Additionally, in the Level 4 case, there are sure to be competing views of what is considered ordinary course. Sellers such as Level 4 may claim that, in the ordinary course, they comply with law, including the current government ordinances to close businesses, and that they adjusted their operations to deal with the current environment.

Note also that the outcome of disputes involving the ordinary course covenant could be affected by the inclusion or absence of any exceptions to a seller's obligation to operate in the ordinary course. For example, it is not unusual for an agreement to provide that a seller can operate outside the ordinary course if required by law or permitted under the agreement, or as necessary in the event of an emergency.

Given the effects of COVID-19, the carveouts to the definition of MAE will likely continue to be an area of focus for parties during negotiations. Until very recently, many agreements did not expressly address the impact of pandemics or epidemics on MAE definitions.

However, there were a number of deals signed in the first quarter of 2020 that specifically excluded the effects of pandemics (often specifically naming COVID-19) from what can be taken into account in determining whether an MAE has occurred, thereby shifting risk to the buyer. We have not seen any provisions (such as closing conditions) that specifically allocate the risk of pandemics or COVID-19 to the seller.

Considering the outcomes in Akorn and Cooper Tire, parties will also be paying special attention to interim operating covenants. Sellers may want to consider ways to soften their obligations to operate in the ordinary course.

This could involve implementing a "commercially reasonable efforts" standard, carving out actions required or requested by a government authority, only requiring compliance "in all material respects," or replacing the "consistent with past practice" standard with one that compares a target's actions to the actions of other similarly situated companies (e.g., "consistent with commercially reasonable custom and practice of companies engaged in similar businesses").

Another approach that has not often been used but may become more prevalent is to specifically incorporate MAE exclusions into the covenant. In so doing, as a matter of contract, operational changes made outside of the ordinary course that are in line with changes made by other market participants and that arise from the pandemic or any other MAE exclusion would not be considered a breach of covenant by the seller.

Buyers should pay close attention to the list of expressly enumerated interim operating restrictions to ensure they adequately protect against the risk of material changes in the target's operations, whether caused by COVID-19 or not.

Buyers will also want to fully understand the potential liability to which they can be exposed in the event of a wrongful termination.

In the event of a termination, many agreements eliminate a party's liability except in the instance of fraud or willful breach. A buyer's potential liability can be significantly affected by the way "willful breach" or "fraud" are defined (if defined at all), so buyers should negotiate to remove these carveouts or define them in a way to limit liability in the event that they have chosen to terminate the transaction and a court determines that the termination is a breach.


Morgan Hollins is a counsel, and Luke Laumann and Gregory Pryor are partners at White & Case LLP.

The opinions expressed herein are those of the author and do not necessarily reflect the views of the firm, its clients, or Portfolio Media Inc., or any of their respective affiliates. This article is for general information purposes and is not intended to be and should not be taken as legal advice.