By James Ferguson
Law360 is providing free access to its coronavirus coverage to make sure all members of the legal community have accurate information in this time of uncertainty and change. Use the form below to sign up for any of our weekly newsletters. Signing up for any of our section newsletters will opt you in to the weekly Coronavirus briefing.


Law360 (May 18, 2020, 4:14 PM EDT) -- The contract disputes now emerging from the COVID-19 pandemic are sure to lead to litigation in both courts and arbitral tribunals involving a wide range of businesses and industries. This litigation will raise novel issues requiring a practical guide on how companies can best position themselves to achieve favorable outcomes in COVID-19 contract disputes.

The key issues relate not only to affirmative defenses and burdens of proof, but also to the nature of relevant evidence, the importance of expert testimony and the major themes of winning strategies.

The litigation of most COVID-19 contract disputes will focus largely on whether the pandemic or its related effects provide a defense for the nonperforming party's alleged breach.

In many cases, the underlying contract will contain provisions addressing unforeseeable events that prevent or impede performance. For example, the contract may contain a force majeure clause that relieves a party of liability if certain unforeseeable events beyond the party's control — e.g., "acts of God," "acts of war" or governmental actions — prevent performance.

Alternatively, in some contracts, especially in loan, real estate or leasing agreements, the parties will specify that a "material adverse event" or other form of "hardship" can provide grounds for either renegotiating or terminating the agreement.[1]

Finally, in addition to contract-based defenses, some common law jurisdictions recognize a breach of contract defense based on "impossibility of performance" or "frustration of purpose."[2]

As shown below, these defenses have several elements in common, with the most important being a requirement that the "triggering event" be both unforeseeable and beyond the nonperforming party's control. At the same time, the defenses have important differences, such as whether a party's "economic hardship" is sufficient to invoke the defense: 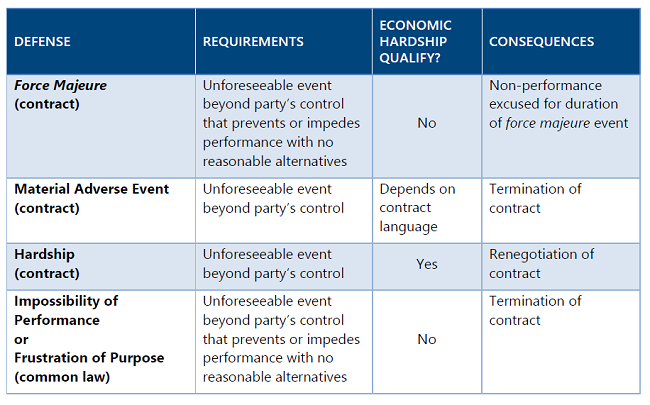 Although the litigation of these defenses will involve widely varying facts and different governing law, it will also raise many common issues and implicate similar themes for litigation strategies.

The first issue likely to arise in any pandemic-related contract litigation is whether the claimed "triggering event" qualifies as an occurrence excusing nonperformance (assuming all other requirements are met). Predictably, the nonperforming party will invoke either the pandemic itself or a specific government restriction (or a combination of both) as the event excusing nonperformance.

In the case of contracts formed after the first reports of COVID-19, the parties are likely to dispute whether the pandemic (or any subsequent government action) was sufficiently "unforeseeable" to qualify as a triggering event. On this issue, the date of contract formation will be critical in assessing the information available to both parties about the emerging pandemic.

By contrast, in the case of contracts formed before the first reports of COVID-19, the nonperforming party will likely be able to show that the pandemic (or its effects) constituted an unforeseeable occurrence that was beyond its control. Indeed, in many cases, the contract will contain a force majeure provision that expressly applies to "epidemics," "acts of government" or, more generally, "other events beyond the party's control."

The definition of the triggering event is important not only for assessing its "unforeseeability," but also for determining its duration and the scope of its effects — factual questions that carry important implications for other issues likely to be litigated in the dispute.

To establish a valid defense, a nonperforming party must also show that the triggering event was the "proximate cause" of its inability to perform a specific contractual duty.[3]

The first requirement focuses on whether a causal link exists between the triggering event and the inability to perform a contractual obligation. On this issue, the nonperforming party will bear the burden of proof.

In the case of contract-based defenses (e.g., force majeure), the necessary quantum of proof will depend in part on whether the contract requires the triggering event to "prevent" performance, or merely "impede" or "delay" performance. It will also depend on whether the relevant provision requires a showing of "but for" causation or some lesser showing of causation.

In most cases, the triggering event must directly prevent or impede the party from completing performance, not simply create economic conditions that make performance impracticable. A major exception to this rule is a contract provision that specifically identifies economic hardship as a qualifying event. Absent such a provision, courts and tribunals generally hold that economic hardship does not excuse nonperformance — even when the hardship is the direct result of a force majeure event.[4]

A  governmental act not only carries the force of law, but also has a well-defined scope that facilitates the causation analysis. For example, a concert promoter could plausibly claim that a government ban on public gatherings directly prevented it from going forward with a scheduled concert. By contrast, if the triggering event is the pandemic itself, the causal link with nonperformance may be more attenuated and may involve elements of economic hardship, such as a decline in demand for the relevant goods or services.

Nevertheless, in many COVID-19 litigations, the nonperforming party will be able to make at least a prima facie showing (based on both fact and expert testimony) that either a government lockdown or the pandemic itself was the proximate cause for its nonperformance.[5] The factual predicate for this showing could take many forms, including a quarantined labor force, an inability to obtain a needed government permit, supply chain disruptions or other factors. In these cases, the litigation will focus not only on the adequacy of the "causal link," but also on whether other causes contributed to the nonperformance.

Could the Effects Have Been Avoided?

Thus, in one reported example, a tribunal found that the occurrence of a flood did not excuse a supplier's failure to deliver goods destroyed by the flood, even though the flood itself qualified as a force majeure event.[6] The tribunal reasoned that the supplier could have avoided the damage caused by the flood if it had packaged the goods in ways consistent with standard industry practice. Similarly, if a company victimized by a cyberattack failed to mitigate the effects of the attack by following its own policies, the company may be foreclosed from using the attack to excuse nonperformance.

Similar issues are likely to arise in many COVID-19 cases as parties dispute whether the nonperforming party failed to take reasonable steps that would have allowed it to avoid the pandemic's effects. In these disputes, the parties will develop both fact evidence and expert testimony comparing the nonperforming party's internal policies and procedures with standard industry practices and/or the practices of similarly situated third parties.

Could the Effects Have Been Overcome?

The final requirement focuses on whether the nonperforming party could have overcome the effects of the triggering event by using a commercially reasonable alternative. In some cases, the resolution of this issue will determine the outcome of the dispute.

For instance, in National Oil Co. of Libya v. Libyan Sun Oil Co, a company that failed to complete a Libyan construction project blamed a U.S. government order banning travel to Libya because the company could not use the U.S. personnel it had allocated for the project.[7] In rejecting the defense, the tribunal stressed that the company could have relied on non-U.S. personnel to complete the project.

Thus, in many COVID-19 contract disputes, the parties will seek to develop both fact and expert evidence on whether any commercially reasonable alternatives were available to the nonperforming party. This issue will likely focus on the "commercial reasonableness" of possible alternatives.

Many contracts contain provisions requiring the nonperforming party to give notice within either a "reasonable" period or a specified number of days. These requirements give rise to two major issues. First, under the contract, when does the period begin within which the nonperforming party must give notice? Is it the date the triggering event occurs, the date its effects on performance occur, or the date such effects become reasonably foreseeable?

In resolving this issue, courts and tribunals generally decline to view notice as a condition precedent unless the contract expressly designates it as such, particularly if the opposing party suffered no prejudice as a result of any alleged delay.[9] In some cases, therefore, the litigation will address what the opposing party knew about the triggering event and its effects on the nonperforming party's ability to discharge its obligations.

In COVID-19 contract disputes, the damages phase of the litigation will have to address two scenarios. The first scenario assumes that the nonbreaching party proves its case and the nonperforming party does not establish a valid defense based on a pandemic-related effect.

In this scenario, the nonbreaching party will generally be entitled to recover the actual damages suffered as a result of the identified breach, with the amount of recovery not to exceed the amount of foreseeable damages at the time of contract formation.[10] The damage recovery would also be subject to any successful mitigation efforts undertaken by the nonperforming party.

As a result, in these cases, the duration of the triggering event — both its starting point and its end point — will become a disputed issue during the damages phase of the litigation. This is particularly true if the nonperforming party relies not only on the triggering event, but also on its continuing effects to excuse nonperformance.[12]

The outcome of COVID-19 contract disputes will depend ultimately on the specific facts of each case and the relevant law governing the disputes. Nevertheless, the litigation of these disputes will involve common issues and strategies that can enable companies to put themselves in the best possible position to achieve a successful outcome.


James R. Ferguson is a partner at Mayer Brown LLP.

[12] See, e.g., Carboex SA v. Louis Dreyfus Commodities Suisse SA (Eng. Court of Appeal) (supplier excused from liability not only because of strikes that interfered with cargo handling operations, but also because of the continuing congestion that delayed delivery).