Law360 (May 22, 2020, 4:02 PM EDT) -- House Democrats are looking to bundle a five-year renewal of highway funding and a batch of tax-favorable victory savings bonds in an emerging economic recovery package aimed at spurring growth and countering effects of the COVID-19 pandemic. 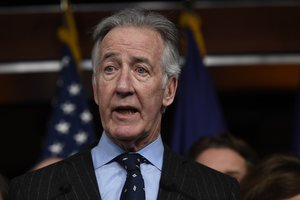 House Ways and Means Chairman Richard Neal said that infrastructure repair should be part of the next coronavirus economic recovery package. (AP)

House Ways and Means Chairman Richard Neal, D-Mass., said he and other senior House Democrats will pivot after the Memorial Day break to try to advance a five-year highway reauthorization bill with bond financing options as part of an economic recovery package aimed at creating jobs and spurring growth.

Such priorities are being developed as separate measures for now, but lawmakers in both parties also say they could be swept into talks on a second round of economic impact payments and expanded tax incentives for families with children in the House-passed $3 trillion Health and Economic Recovery Omnibus Emergency Solutions Act, or Heroes Act.

"The next round will be recovery. That would include infrastructure," Neal told Law360, referring to his new focus on moving the highway bill in tandem with other stimulus measures such as business tax incentives and bond financing options for infrastructure and other Democratic priorities.

He said House Democrats would try to address Senate GOP concerns that the Heroes Act puts too much stress on relief measures and not enough on economic stimulus measures, while laying groundwork for their own follow-on recovery package possibly including tax incentives and the highway bill.

Neal said he was continuing talks with Treasury Secretary Steven Mnuchin in the hope of cutting a deal on potential revenue-raising measures for the highway bill. Neal said Democrats had made no decision on whether to push forward in the absence of an accord with the administration on contentious proposals to lift or index for inflation the gasoline tax of 18.4 cents per gallon.

With or without any changes in the gasoline tax, Neal said there were good prospects for various bond proposals including plans to expand and increase flexibility for tax-exempt private activity bonds.

"I think we will have almost an alphabet soup of what we're going to do to finance it. It's going to involve some borrowing. You make the borrowing so that it is based on an investment in America," Neal said, referring to the highway bill.

Neal also pointed to a proposal by Rep. John Larson, D-Conn., calling for the issuance of tax-deferred victory savings bonds to provide support for coronavirus-related public health efforts and small business aid. Larson said the bonds also could be used to help finance infrastructure, and predicted they would be similar to bonds issued during World War II.

"There would be patriotic fervor behind it," Larson told Law360.

In addition to various types of bonds, Neal has voiced interest in a number of business-related tax proposals, including incentives aimed at rewarding multinationals for relocating to the U.S., or onshoring, factories now in foreign countries.

On the other side of the aisle, Rep. Kevin Brady, R-Texas, the ranking member on Ways and Means, said he planned to develop his own economic stimulus plan with permanent expensing of equipment and structures and broader incentives for research and development. He took a cool stance toward Democrats' bond financing proposals.

Republicans have blocked the Heroes Act in the Senate, arguing that it omits economic stimulus measures. They have begun discussing a Senate GOP alternative coronavirus response measure that would combine business tax incentives with a shield to protect companies against COVID-19 liability lawsuits.

Senate Finance Committee Chairman Chuck Grassley, R-Iowa, told Law360 this week that he still hoped to work on a Senate GOP alternative to the Heroes Act, including measures aimed at spurring economic growth.

"We're trying to get funding," Grassley told Law360, referring to Senate GOP talks about potential revenue-raising measures or spending cuts to help pay for a $287 billion highway bill, S. 2302. The measure has been backed by President Donald Trump, but has been stalled because of disputes over how to raise additional funds to make up for flat gasoline tax revenues in the Highway Trust Fund.

Barrasso said several revenue-raising ideas were still alive, including proposals to index the gasoline tax to inflation and create a user fee for electric vehicles. And Sen. John Cornyn, R-Texas, a senior member of the Finance Committee, said he was still pushing for a mileage-based commercial freight tax.

While such measures are being discussed, Barrasso said the pandemic had increased pressure on lawmakers to finish a highway bill to address the need for infrastructure funding.

"The Highway Trust Fund is down because people are not driving," Barrasso told Law360, referring to COVID-19's impact on the Internal Revenue Service's fuel tax collections.

In light of such concerns, several GOP lawmakers said the highway bill could become part of negotiations on the Heroes Act and other coronavirus relief legislation.

Senate Majority Whip John Thune, R-S.D., told Law360 that Barrasso's bill remained a good candidate for inclusion in coronavirus response legislation because it is seen by both parties as a powerful driver of growth.

"Infrastructure is something that would help to restart the economy, when we get to that point," said Thune, who chairs the Finance Committee's Taxation and IRS Oversight Subcommittee.

Sen. Bill Cassidy, R-La., a member of the Finance Committee, said a broad package of tax incentives and other measures aimed at reviving the economy could get bogged down unless it can be combined with a popular vehicle like the highway bill.

"We need to have an engine to pull it," Cassidy told Law360.

As lawmakers continue to discuss parts of the highway bill and economic stimulus measures, senators in both parties said they expected several bond financing proposals for infrastructure projects to gain traction.

For example, Sen. John Hoeven, R-N.D., said he believed there would be consensus support for his bipartisan plan, S. 146, to create more flexibility by introducing Move America bonds, capped at 50% of each state's annual overall volume cap for private activity bonds. The measure would let states allocate tax credits capped at 25% of their state volume cap to investors in certain projects, state infrastructure banks and revolving funds.

Sen. Rob Portman, R-Ohio, a senior member of the Finance Committee, said that when senators return to Washington the week of June 1, he and other Republicans would continue to work on the highway bill and would vet proposals to expand business tax provisions of the Tax Cuts and Jobs Act.

He said the highway bill and Senate GOP stimulus proposals could be on the table, along with components of the Heroes Act, as both parties try to develop a sequel to the Coronavirus Aid, Relief and Economic Security Act

, or CARES Act, signed by Trump in March.

"If we're not going to do the next coronavirus bill until June at the earliest," Portman told Law360, "let's combine rescue and stimulus measures."