By Jeff Sistrunk
Law360 is providing free access to its coronavirus coverage to make sure all members of the legal community have accurate information in this time of uncertainty and change. Use the form below to sign up for any of our weekly newsletters. Signing up for any of our section newsletters will opt you in to the weekly Coronavirus briefing.


Law360 (August 12, 2020, 4:46 PM EDT) -- The Judicial Panel on Multidistrict Litigation rejected Wednesday two petitions to centralize hundreds of cases filed by businesses seeking insurance coverage for losses during the COVID-19 pandemic, but indicated that centralization could still be appropriate for cases against four insurers. 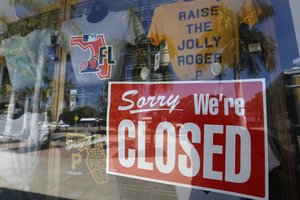 An "industry-wide MDL in this instance will not promote a quick resolution of these matters," the JPML said Wednesday in rejecting bids to centralize COVID-19 business interruption cases. (AP Photo/Carlos Osorio)

In the much-anticipated ruling, the seven-member JPML denied motions lodged by two groups of policyholder plaintiffs, one of which sought to centralize the nation's federal business interruption cases in the Northern District of Illinois in Chicago, and the other of which asked for them to be centralized in the Eastern District of Pennsylvania in Philadelphia.

Noting the fact that the cases involve more than 100 insurers and a wide variety of different policy forms, the JPML concluded that an "industry-wide MDL in this instance will not promote a quick resolution of these matters."

"Put simply, the MDL that movants request entails very few common questions of fact, which are outweighed by the substantial convenience and efficiency challenges posed by managing a litigation involving the entire insurance industry," the panel wrote.

However, the JPML signaled it may still be open to the creation of smaller "single-insurer" MDLs to centralize actions against specific insurers facing high volumes of cases. In particular, the panel said cases against The Hartford, Cincinnati Insurance Co., various underwriters at Lloyd's of London and Society Insurance Co. could be suitable for centralization, and asked counsel for those insurers to submit filings addressing the issue by Aug. 26.

Wednesday's order closed a chapter in a legal saga that has commanded insurance attorneys' attention for months.

The push for an MDL dates back to April, when the two groups of policyholders filed their dueling petitions with the JPML, asserting that business interruption coverage battles pending in federal courts across the country are well-suited for centralization. At the time, fewer than 20 cases were pending in federal district courts nationwide; as of Wednesday, that number stood at more than 450, according to a Law360 analysis of court records.

W. Mark Lanier of Lanier Law Firm, who represented the policyholders that sought centralization in Chicago, said in a statement the COVID-19 insurance disputes are a "complicated set of cases, and hopefully some mechanism will be found to prevent the chaos many are anticipating in the multi-forum races to resolution."

And Richard M. Golomb of Golomb & Honik PC, who represented the policyholders that requested centralization in Philadelphia, said in a statement that he is optimistic the JPML "will ultimately create MDLs in the cases against the four major carriers named."

"As far as the balance of the defendant insurers, competent counsel will find a way to coordinate to litigate these cases in the best interests of their respective clients," Golomb added. "Whether that is through 1404 coordination motions or other means remains to be seen."

The heated debate culminated in a 90-minute hearing before the JPML on July 30 that featured arguments by 15 attorneys. During the session, attorneys for the petitioners and other supporters of centralization identified common fact issues across the hundreds of pending cases, including whether government closure orders trigger coverage, what satisfies business interruption policies' standard requirement of "direct physical loss or damage" to property, and whether any exclusions — particularly those for virus-related losses — apply.

The JPML, however, was unconvinced that the cases would share enough common issues to justify an industrywide MDL, saying in Wednesday's order that the three core questions identified by attorneys at the hearing "share only a superficial commonality." The panel pointed out that each case targets only a single insurer or insurance group, and the cases involve "different insurance policies with different coverages, conditions, exclusions, and policy language, purchased by different businesses in different industries located in different states."

"To say this litigation would result in a complicated MDL seems an understatement," the panel wrote. "Managing such a litigation would be an ambitious undertaking for any jurist, and implementing a pretrial structure that yields efficiencies will take time. As counsel emphasized during oral argument, however, time is of the essence in this litigation."

The panel also rebuffed some policyholder plaintiffs' proposals for smaller regional or state-based MDLs, finding that they would "suffer from many of the same problems" as an industrywide MDL because they would still involve multiple defendants and different policy terms.

But the JPML said that single-insurer MDLs could be viable, as cases against one insurer or insurance group are "more likely to involve insurance policies utilizing the same language, endorsements, and exclusions" and could therefore share common discovery and pretrial motion proceedings.

As for cases involving the many other insurers, the JPML suggested that the parties in those actions could pursue "informal cooperation and coordination" or seek to have cases against a common insurer in a given district court heard by one judge.

Society Insurance spokeswoman Rebecca Kollmann said the insurer does not comment on ongoing litigation but "looks forward to a favorable resolution of this situation in the near future."

Cincinnati spokeswoman Betsy Ertel told Law360 that the insurer "agree[s] with the panel's decision against the centralization of these cases in an industrywide MDL."

"We think that insurer-specific MDL centralization should likewise be avoided," she added. "We look forward to our engagement with the panel on this issue."

Representatives for Hartford and the Lloyd's underwriters did not immediately respond to requests for comment late Wednesday.

The JPML's rejection of an industry-wide MDL came as a relief to Jonathan Shub of Shub Law Firm LLC, who is representing businesses in cases against Hartford, Society and Erie Insurance Exchange.

"This was like trying to fit a square peg into a round hole," Shub said, adding that he thinks single-insurer MDLs are not the answer because even policies issued by the same insurer in multiple states can vary wildly.

John N. Ellison of Reed Smith LLP, who counsels policyholders, likewise told Law360 that substantial variations in policy language are a major hurdle for centralization. Since the pandemic began, he estimated he has read about 200 different business interruption policy forms, saying "it is remarkable how different these policies all are."

"I think the MDL panel was hinting there are things that will happen in these cases that will operate like a consolidation, but there is really no practical way to do a mass consolidation when there are so many variables in play in each case that outweigh any commonality," Ellison said.

Shub suggested that courts could follow the lead of a Pennsylvania judge who last month issued an order coordinating a slew of COVID-19 coverage suits against Erie Insurance in her court for "pre-trial matters, trial, and full and final resolution." Shub noted those cases all involve Pennsylvania businesses suing a Keystone State-based insurer for coverage under a policy form approved by the state's insurance regulator.

"What would make more sense, frankly, is if you had coordination in one state for one policy," he said. "That is the type of coordination that makes sense."

Update: This story has been updated to include a comment from Cincinnati.