Law360 (October 1, 2020, 6:30 PM EDT) -- A California federal judge ruled that President Donald Trump likely overstepped his authority when he blocked new work visas under coronavirus-related restrictions, delivering a victory Thursday to the U.S. Chamber of Commerce and technology giants that had challenged the move. 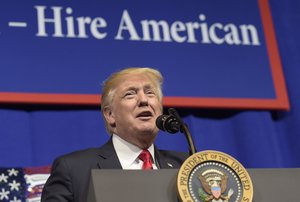 U.S. District Judge Jeffrey White found that Trump did not have the authority to issue his June proclamation that temporarily blocked companies from bringing on new hires from abroad on a number of visas reserved for high-skilled workers, including the H-1B specialty occupation visa, the L visa for internal transfers, H-2B guest-worker visas and J-1 cultural exchange visas.

The restrictions were purportedly handed down to free up jobs for U.S. workers during the recession caused by the COVID-19 pandemic. However, while the president does have significant powers to suspend the entry of foreign citizens abroad in matters of national security, the president does not have "unbridled authority to set domestic policy regarding employment of nonimmigrant foreigners," the judge said.

"Indeed, there must be some measure of constraint on presidential authority in the domestic sphere in order not to render the executive an entirely monarchical power in the immigration context, an area within clear legislative prerogative," Judge White wrote in a 25-page opinion. "Such unrestricted authority would be contrary to Congress' explicit delegation of powers in foreign affairs and national security."

Judge White, however, limited the relief to the business associations that challenged the visa proclamation, rather than blocking it nationwide. Those groups, which include the Chamber of Commerce and a coalition of technology giants that counts Apple and Google among its rank, had argued that the visa restrictions would inflict severe economic harm by preventing them from transferring executives to U.S. offices and attracting foreign talent.

The court's decision, while limited in scope, marks a setback for the Trump administration, which has relied heavily on its broad legal authority to bar the entry of foreign citizens to enact severe restrictions on legal immigration.

Judge White's ruling also stands in conflict with a D.C. federal judge's ruling in a separate case brought by Indian citizens stuck abroad, where the judge had refused to block the president's ban on H-1B visas.

During oral arguments in September, Judge White had wrestled with his own authority to review Trump's proclamation and the rationale behind it. In its 2018 ruling upholding Trump's travel ban, the U.S. Supreme Court found the president has broad authority to suspend the entry of foreign citizens when he determines it is in the national interest.

Citing this authority, the U.S. Department of Justice's lawyer, Joshua Press, had argued that the proclamation "does not have to be supported by the record at all," and that "it is not for the judiciary to substitute their judgment on economics."

But in Thursday's opinion, Judge White ultimately distinguished this proclamation from Trump's travel ban targeting foreign citizens from Muslim-majority nations. Unlike the travel ban, which centered on issues of national security and foreign affairs, Trump's work visa ban involves a "purely domestic economic issue — the loss of employment during a national pandemic," the judge said.

"This court rejects the position that the proclamation implicates the president's foreign affairs powers simply because it affects immigration," he said.

Instead, Judge White leaned on the Ninth Circuit's decision that blocked another one of Trump's proclamations, which had sought to bar foreigners from moving to the U.S. on new green cards unless they could prove they could afford health insurance.

And given that Trump did not have the authority to suspend those work categories, Judge White also found that the president cannot "eviscerate portions of the statute" enacted by Congress to create those visa programs.

"The proclamation, by its explicit terms, rewrites the carefully delineated balance between protecting American workers and the need of American businesses to staff their operations with skilled, specialized, and temporary workers," he wrote.

Linda Kelly, senior vice president and general counsel of the National Association of Manufacturers, one of the business groups behind the lawsuit, hailed the ruling as a "temporary win" for the manufacturing industry.

"We are grateful the court recognized the real and immediate harm these restrictions have meant for manufacturers right now and stopped this misguided policy until the court can fully consider the matter," she said in a statement Thursday.

Representatives for the White House and the U.S. Department of Justice didn't immediately respond to requests for comment Thursday.

The business associations are represented by Paul W. Hughes, Michael B. Kimberly and William G. Gaede III of McDermott Will & Emery LLP.

The federal government is represented by Joshua Press of the DOJ's Civil Division.

Update: This article has been updated with comment from one of the business groups and background on the case.