Law360 (June 22, 2020, 3:37 PM EDT) -- President Donald Trump will bar foreign citizens from moving to the U.S. on a number of work visas, including the H-1B specialty occupation visa, through the end of 2020 in response to high U.S. unemployment, senior administration officials told reporters Monday. 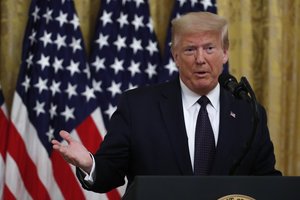 The officials said that H-1B visas for highly skilled workers, H-2B guest-worker visas, J trainee visas and L intracompany transferee visas, along with those for their spouses, will be restricted, which they said would free up 525,000 jobs for Americans.

Few exemptions are available, the officials said, though H-2B workers in the food supply and seafood processing industry are shielded. Additionally, foreigners coming to the U.S. to treat or research the novel coronavirus will be exempted from the ban, though other health care workers will not be.

"President Trump is focusing on getting Americans back to work as quickly as possible," one of the officials said on the call, describing the plan as part of Trump's "America First recovery."

The order, published on Monday evening, will only affect those outside the U.S. who do not already have valid visas. The president is also extending existing restrictions on new green cards through the end of the year.

In addition to the visa suspension, the president is calling for massive changes to the H-1B visa system itself, including by eliminating the annual lottery and instead awarding the 85,000 slots to those candidates offered the highest salaries. An official said this would reduce competition for entry-level positions.

Trump is also instructing the U.S. Department of Labor to "clean up" the prevailing wage requirement, which mandates that H-1B visa holders be paid industry standard wages, to ensure "we're getting the best and the brightest," an official said.

It's unclear what the restrictions on the H-1B visa, which permits employers to hire foreigners with university degrees in specialty occupations, will mean for companies that won coveted visa slots in the March lottery to bring in workers this fall, if those workers have not yet arrived in the U.S.

H-1B visas are capped at 65,000 annually, with another 20,000 reserved for individuals with U.S. master's degrees or higher. Earlier this year, U.S. employers submitted around 275,000 visa requests for those slots.

Susan Cohen, chair of Mintz Levin Cohn Ferris Glovsky and Popeo PC's immigration practice, told Law360 on Monday that she didn't believe the restrictions will solve U.S. unemployment, noting that many employers are unlikely to drop their desired new hires after a lengthy recruiting and immigration process.

One of her clients has already told her that the company won't rescind its offer to an H-1B worker, but will instead wait for that worker to be permitted to enter the U.S.

"I think that's going to be a common response from most employers," she said. "It's kind of insulting to the employer community for the government to say that their choice of who they want to fill a particular position is no longer viable."

Alex Nowrasteh, director of immigration studies at the Cato Institute, a libertarian think tank, also questioned the economic rationale behind the restrictions, while adding that H-1B visa holders working in the information technology industry have been key to helping Americans work remotely during the coronavirus pandemic.

"Reducing immigration at this time will exacerbate COVID-19's economic destruction and delay the eventual recovery," Nowrasteh said in a statement.

Spokespeople for the U.S. Department of Homeland Security and the White House didn't immediately respond to requests for more details.

The new restrictions come exactly two months after Trump's April 22 order barring some foreign citizens from moving to the U.S. on new green cards, including relatives of permanent residents and parents of U.S. citizens, with broader exemptions for health care and other essential workers.

When handing down that proclamation, Trump instructed administration officials to review nonimmigrant visa programs and recommend "other measures appropriate to stimulate the United States economy and ensure the prioritization, hiring, and employment of United States workers" within 30 days.

The Trump administration has already closed the U.S. land borders to nonessential travel, and the Centers for Disease Control and Prevention has issued an order under a public health statute allowing border officials to turn back all migrants arriving without proper documentation, including children and asylum seekers.

The administration is also considering limiting a postgraduate work program for international students, though those changes would likely need to be issued in the form of a regulation.

Since Trump's green card ban, business lobbyists and lawmakers have fought to protect guest worker visas from a possible expansion of the ban, insisting that blocking the entry of these foreign citizens from working in the U.S. will hurt the U.S. economy and competitiveness.

Earlier this month, Thomas J. Donohue, CEO of the U.S. Chamber of Commerce, penned a letter to the president stressing the importance of these foreign workers to American businesses.

He warned that restrictions on the L-1 visa in particular, which allows international companies to send foreign executives to U.S. locations, or on the H-1B visa for workers in specialty occupations, will deter future investment in the U.S.

"Businesses and workers are starting to recover from the downturn caused by COVID-19. However, restrictive changes to the immigration system will push investment and economic activity abroad, slowing down the recovery and reducing job creation," Donohue said.

A coalition of more than 300 businesses and industry groups also wrote the White House last month urging the administration not to prevent highly educated foreign citizens from coming to the U.S. to work.

Support for more cuts to legal immigration has also divided the Republican Party.

Dozens of Republicans in the House and Senate have urged the president to shield the H-2B seasonal visas from any restrictions, stressing that those visas are key for seasonal businesses, like construction and landscaping, to maintain their workforces.

"Filling these roles, that are more abundant than the number of U.S. employees qualified to fill them, means these jobs can be kept in the U.S. This allows companies based in the U.S. to remain globally competitive, which in turn boosts the U.S. economy, creating jobs for millions of Americans," the alliance said in a statement Monday.

Update: This story has been updated with more information about the announcement and comments.