Law360 (April 19, 2021, 4:41 PM EDT) -- A Boston federal judge on Monday laid out plans for the district's first high-profile criminal jury trial since the start of the COVID-19 pandemic, walking attorneys through an exhaustive set of safety measures including witness stands encased in plexiglass and disposable microphone covers. 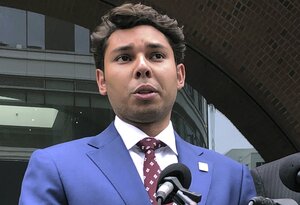 Former Mayor Jasiel Correia of Fall River, Massachusetts, pictured in 2019, is facing bribery, fraud and tax charges in a trial set to begin Tuesday, in the first high-profile criminal jury trial in the district since the pandemic began. (AP Photo/Philip Marcelo, File)

Jury selection in the trial of former Fall River Mayor Jasiel Correia, who is facing bribery, fraud and tax charges, is set to begin on Tuesday. Prosecutors claim Correia solicited bribes from cannabis businesses seeking to open in his city and also defrauded investors in an app he created.

U.S. District Judge Douglas P. Woodlock held a two-part pretrial conference Monday morning, half of it in the second-floor jury assembly room and the other half in his third-floor courtroom.

"This is a work in progress," Judge Woodlock said. "We are going to do the very best we can to provide an orderly, fair but overall safe way of proceeding in this case."

Among the precautions will be a courtroom census to closely monitor who will be in the room more than briefly during the three-week trial. Under the guidelines set out by the court, only 26 people will be allowed in the room, or one person for every 100 square feet.

Judge Woodlock spent part of the morning taking a count of people essential to run the trial. Accounting for 22 of the 26 will be himself, his deputy, the court reporter, at least 14 jurors, three government attorneys, one defense attorney and Correia.

Correia asked that his fiancee and parents be allowed in the courtroom, but Judge Woodlock said one of the parents may be a witness in the case and may therefore be sequestered with the other witnesses. The final two spots would be taken by whichever witness is on the stand and a pool reporter from the media. The judge, however, stressed that any plans are subject to change.

The layout of the courtroom has also been adapted. The bench and witness stand are encased in plexiglass. When witnesses take the stand, they will bring with them a small microphone cover, as they will be the only ones not wearing masks. Their last job after testifying will be to take the mic cover with them and wipe down the area.

On Monday, a pink tube of Lysol wipes and a bottle of hand sanitizer sat next to the empty chair.

Judge Woodlock did not address the courtroom ventilation systems or air filtration, which deal with airborne virus transmission.

The jury boxes in Boston's Moakley federal courthouse can usually hold 18 people comfortably. With social distancing measures in place, that number drops to five, Judge Woodlock said. The other jurors will be seated in chairs in front of the counsel tables, facing the witness stand.

During opening and closing statements, the jurors will swivel around to face the attorneys, who will do all questioning and give all arguments from their tables. Sidebars are strongly discouraged, Judge Woodlock said, but whisper technology is available if they are needed.

Jury Administrator Jim McAlear told the attorneys that 30 jurors will be brought in Tuesday morning and will be filing out a health questionnaire in addition to answering the usual questions related to the case itself. Four days have been set aside for empanelment.

More than 2 million Massachusetts residents have been fully vaccinated against COVID-19, and everyone ages 16 and up is eligible to receive a dose as of Monday. Judge Woodlock said that while jurors will be asked questions about their health, they will not be asked about their vaccination status.

The judge said that one of his primary duties in overseeing the proceeding is avoiding a mistrial.

"Avoiding a mistrial means we keep the jury safe and intact," he said. "That means maintaining social distancing."

Prosecutors claim Correia shook down marijuana vendors for hundreds of thousands of dollars in exchange for official city letters backing their dispensary plans.

His former chief of staff and three other associates who allegedly took money from pot vendors on the former mayor's behalf have pled guilty.

Prosecutors added those allegations to the fraud and tax charges alleging Correia duped investors in his marketing app out of more than $231,000 by using their cash for expensive travel and to buy a Mercedes and luxury clothing. He has denied the charges and vowed that he will prove his innocence at trial.

The government is represented by Zachary R. Hafer, Carol E. Head, and David G. Tobin of the U.S. Attorney's Office for the District of Massachusetts.