By Joanne Faulkner
Law360 is providing free access to its coronavirus coverage to make sure all members of the legal community have accurate information in this time of uncertainty and change. Use the form below to sign up for any of our weekly newsletters. Signing up for any of our section newsletters will opt you in to the weekly Coronavirus briefing.


Law360, London (June 17, 2021, 3:23 PM BST) -- Budget airline Ryanair and the owner of three major English airports announced a legal challenge on Thursday against the U.K. government over its "traffic light" system for international travel as they seek transparency over how the list is drawn up. 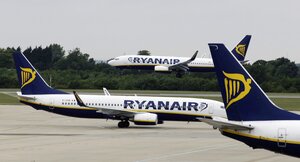 Manchester Airports Group, the owner of London Stansted, and budget airline Ryanair are seeking to challenge the government in the High Court over its COVID-19 ranking system for foreign countries. (AP Photo/Matt Dunham)

Ryanair Holdings PLC and Manchester Airports Group — which owns and operates Manchester, London Stansted and East Midlands airports — are seeking judicial review to challenge the system which rates countries green, amber or red based on their COVID-19 risk, the companies said in a joint statement.

Health Secretary Matt Hancock and Transport Minister Grant Shapps will be named as defendants in the court documents. The companies want to force the government to explain the reason behind its ranking system and publish the supporting data, "given the dramatic impact these decisions have on the aviation industry," the companies said.

Ryanair's chief executive, Michael O'Leary, said he was calling on Prime Minister Boris Johnson to "explain the scientific basis behind this system that the government seem to make up as they go along and to establish a data-driven transparent model that could restore confidence in air travel ahead of the very crucial peak summer months."

A government spokesperson said they could not comment on legal proceedings, but said they recognized that "this is a challenging period for the sector as we seek to balance the timely reopening of international travel while safeguarding public health and protecting the vaccine roll-out."

The companies say the legal action has been prompted by the decision to remove Portugal from the green list this month without notice, weeks after Britons were given the go-ahead to visit. The government did not add any more countries to the green list at the same time.

In a statement of facts and grounds lodged with the High Court, the companies challenge the government's lack of transparency in this decision.

The proceedings are being led by Manchester Airports Group, but some airlines support the challenge, the statement says. They want the government to publish the COVID-19 prevalence thresholds it uses to determine whether destinations are classed as red, amber or green, as well as any other criteria or information that informs its decision-making.

The court papers say many countries have prevalence rates lower than for Portugal when it was classed as green, and far lower than current rates in the U.K. They added that the industry had understood the government would also treat destinations such as the Balearic, Canary and Greek Islands differently from their mainlands.

"This lack of clarity in the decision-making process is not marginal but fundamental," the court filing states. "Decisions that dramatically affect the claimant and other industry participants are being made in what amounts to a 'black box' with outcomes apparently unrelated to data."

Manchester Airports Group says the lack of transparency makes it impossible for any travel business to "make meaningful representations, to plan or to scrutinize the legality of the decisions."

The companies say the judicial review is based on clear legal precedents that require the government to explain its decisions and to be open about the basis of its conclusion.

A High Court judge ruled in February that Hancock had acted unlawfully by failing to publish the details of contracts awarded to suppliers throughout the COVID-19 pandemic on time, following a challenge from a campaign group.

Counsel information for the defendants was not immediately available.

Case information was not immediately available.

Update: This story has been updated to add comment from the government.