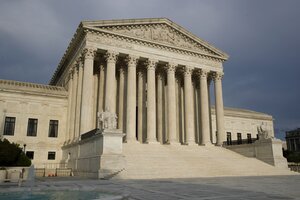 Under the COVID-19 Emergency Eviction and Foreclosure Prevention Act, tenants in most circumstances can fill out a hardship form in order to pause or prevent an eviction case from proceeding against them. Yet the relevant part of the statute, Part A, is now blocked pending an appeal currently before the Second Circuit, the unsigned opinion states.

The opinion clears the way for landlords to pursue eviction through the courts in cases where a hardship form has been submitted. Siding with the landlord plaintiffs, the high court found that CEEFPA "generally precludes" plaintiffs from contesting a hardship form and, in doing so, denies their constitutional right to a hearing.

"This scheme violates the court's longstanding teaching that ordinarily 'no man can be a judge in his own case' consistent with the due process clause," the justices wrote.

Dissenting, Justice Stephen Breyer argued that the landlords and their trade group, the Rent Stabilization Association, who filed the underlying suit in May against New York Chief Administrative Judge Lawrence Marks, have not met the threshold for relief.

With CEEFPA poised to expire in a matter of weeks, Justice Breyer noted, there is credence to Judge Marks' argument that the landlords' right to challenge a hardship form is delayed rather than denied.

Breyer also said that the hardship tenants may face must also be considered, as they "have relied on CEEFPA's protections and will now be forced to face eviction proceedings earlier than expected."

"The legislature does not enjoy unlimited discretion ... but in this case I would not second-guess politically accountable officials' determination of how best to 'guard and protect' the people of New York," Justice Breyer wrote.

"We sought emergency relief because New York's continuing moratorium violated owners' constitutional rights and left small landlords struggling to survive, with no opportunity even to be heard in court, a fundamental right guaranteed by the U.S. Constitution," Randy Mastro of Gibson Dunn & Crutcher LLP, counsel for the landlord plaintiffs, stated. "Now, all parties will have that right, thanks to today's Supreme Court decision."

The New York Attorney General's Office, which is representing Judge Marks in the case, did not immediately reply to a request for comment. Nor did the state's Office of Court Administration.

Condemning the decision Thursday, tenant advocates also laid out protections that renters can continue to avail themselves of, including the Tenant Safe Harbor Act, which makes financial pandemic-era hardship a defense in housing court.

Tenants who apply to New York's ongoing federal rental assistance program should also benefit from eviction protections while their applications are pending, advocates said. A newly tailored anti-eviction order from the Centers for Disease Control and Prevention was recently extended through early October and could potentially offer a defense.

State Sen. Brian Kavanagh, a co-sponsor of CEEFPA, said late Thursday that the hardship forms were designed to "prevent households from being dragged into court during a pandemic."

"I'm going to be looking at [CEEFPA] in light of the court's opinion and figuring out if there's a way to shore up the law," Kavanagh added in a phone interview. "The court did not say we can't have a moratorium if someone is experiencing hardship. They are saying it can't be based on self-attestation, so we're going to be looking at if that can be amended."

Tenants should also keep in mind that eviction is a multistep process that has been drawn out in the pandemic, added Marika Dias, attorney and director of the Safety Net Project at the Urban Justice Center in New York City.

"There are still steps that landlords need to take under the law," Dias told Law360. "There's still the fact that courts are not physically reopened or functioning at capacity, and a tremendous number of cases have accrued in the system. So this doesn't mean that landlords are going to be able to evict tenants en masse right away, but it is nonetheless an incredibly harmful decision for New York tenants."

Last week, two New York legislators introduced a bill to extend CEEFPA through the end of October, citing delays in the disbursal of federal rent relief.

In a Thursday night tweet, New York Lt. Gov. Kathy Hochul said that she looks "forward to working with the Legislature to quickly address the Supreme Court's decision & strengthen the eviction moratorium legislation." Hochul will become governor in less than two weeks, following Gov. Andrew Cuomo's resignation in the midst of a sexual harassment scandal.