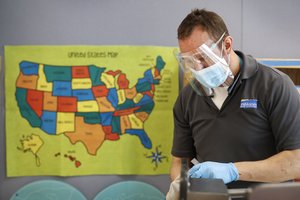 The "temporary" rule, which took effect Sept. 16, addresses areas of a prior rule the DOL issued in April that U.S. District Judge Paul Oetken invalidated last month after finding that the agency exceeded its authority.

New York Attorney General Letitia James had challenged four parts of the April rule: a provision denying workers benefits when their employers "do ... not have work" for them; the DOL's interpretation of the law's exclusion for health care providers; the rule's limits on taking so-called intermittent leave; and its documentation requirements.

"As the economy continues to rebound, more businesses return to full capacity, and schools reopen, the need for clarity regarding the Families First Coronavirus Response Act paid leave provisions may be greater than ever," said Cheryl Stanton, administrator of the DOL's Wage and Hour Division. "Today's updates respond to this evolving situation and address some of the challenges the American workforce faces. Our continuing robust response to this pandemic balances support for workers and employers alike, and remains our priority."

Friday's rule reaffirms the DOL's stance that leave under the FFCRA, which Congress passed in March as coronavirus cases started surging, can be taken "only if the employee has work from which to take leave."

Judge Oetken had found that the DOL went too far in its initial rule when it blocked workers from taking FFCRA leave if their employers don't have work for them to perform.

While the DOL said in Friday's rule that it will hew to its earlier stance, it said it "carefully considered the district court's opinion" and offered a "fuller explanation for its original reasoning regarding the work-availability requirement" that it adopted in April. The agency also made some clarifications to the regulatory language it uses.

The DOL in Friday's rule also remained steadfast on its previous interpretation of the FFCRA that so-called intermittent, or periodic, leave under the law is allowed only if an employee gets permission from their employer to do so. But the agency offered a more fulsome explanation of its position that it said is intended to "supplement" but not replace its earlier stated position.

"The Department believes the employer-approval condition for intermittent leave under its [Family and Medical Leave Act] regulation is appropriate in the context of FFCRA intermittent leave for qualifying reasons that do not exacerbate risk of COVID-19 contagion," the DOL said in Friday's rule. "It is a longstanding principle of FMLA intermittent leave that such leave should, where foreseeable, avoid 'unduly disrupting the employer's operations.' It best meets the needs of businesses that this general principle is carried through to the COVID-19 context, by requiring employer approval for such leave."

Besides those elements, the rule also updated the definition of "health care provider," whom the FFCRA explicitly excludes, after Judge Oetken found that the agency crafted a definition of the term that was far too broad and potentially cut off too many workers from using of the leave.

For example, the DOL's lengthy definition included anyone employed at hospitals, medical schools and a range of other places "where medical services are provided." It also encompassed any employee of a contractor at one of those facilities and anyone employed by a business that produces medical equipment, according to the judge's order.

Under the revised definition, a worker is a health care provider if the individual is "capable of providing health care services," which include "diagnostic services, preventive services, treatment services, or other services that are integrated with and necessary to the provision of patient care" or otherwise meets the FMLA's definition of the term.

"Congress' optional exclusion of emergency responders in addition to health care providers demonstrates that Congress was intending to provide a safety valve to ensure that critical health and safety services would not be understaffed during the pandemic," the Labor Department said. "Given this context, the Department concluded Congress did not intend to limit the optional health care provider exclusion to only physicians and others who make medical diagnoses."

The DOL also sought to "clarify" several issues regarding how workers notify employers that they will use FFCRA leave, according to Friday's rule.

The FFCRA took effect April 1, several weeks after it was signed by President Donald Trump, and will remain in place until the end of the year. It includes two components: the Emergency Paid Sick Leave Act and the Emergency Family and Medical Leave Expansion Act.

The law, which applies to most employers with under 500 employees, provides workers with two weeks — up to 80 hours — of leave at full pay if they're sick or have to quarantine, and the same allotment at partial pay if workers have to care for sick family members or homebound children. The law also provides two weeks of unpaid time off followed by 10 weeks at partial pay to workers who can't work because their child's school or day care provider has closed.

The Labor Department's April rule codified and expanded on several tranches of guidance that the agency issued in the weeks after the law was enacted, including a Q&A document that the agency updated several times to address questions about the law as they came up.