Law360 (May 21, 2020, 5:26 PM EDT) -- Labor unions have been inundated with calls for help from nonunion workers fearful of contracting the coronavirus on the job, setting the stage for a wave of organizing following decades of declining union membership, labor leaders say. 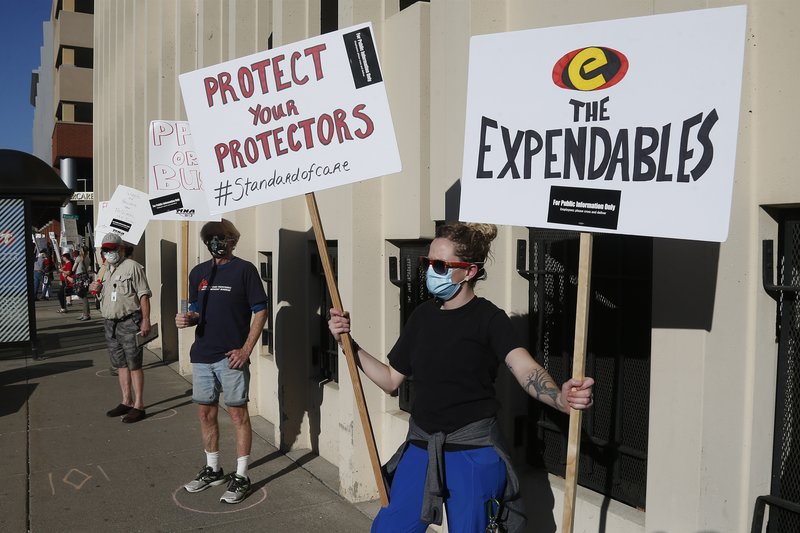 Some nonunion workers are leaning on unions for help asserting their rights and demanding protections during the pandemic. (AP Photo/Jim Mone)

In the short term, labor unions are helping these workers stage actions and schooling them on their right to protest unsafe conditions and demand protections under the National Labor Relations Act and other federal and state laws. They're also laying the groundwork to turn this new crop of worker-activists into members.

"There is a pandemic that's creating an environment where workers fearful for their lives are taking action with their co-workers that they hadn't contemplated before," said Iain Gold, the strategic research and campaigns director for the International Brotherhood of Teamsters. "There is, I think, an unprecedented amount of organic, worker-led activity."

These fears have led thousands of nurses, fast-food cashiers, meat processing workers and others across the country to stage strikes and walkouts as they demand protective equipment, hazard pay, more generous sick leave and other protections and benefits. Many of the workers who have taken action are in unions, but others have done so on their own. And organized labor is lining up to help them.

Earlier this month, the Teamsters launched an online resource center aimed at helping nonunion workers secure protections by flexing their labor rights. The portal, called Solidarity is Essential, lays out a step-by-step guide for staging actions that comply with the NLRA, details workers' rights to organize and report unsafe conditions to federal and state authorities, and tracks worker actions related to COVID-19. It also invites workers who feel unsafe or want to join with co-workers to improve job conditions to provide their contact information for a call with the union, which mostly represents transportation industry workers.

"If workers are given information and are shown support and are shown an example of how union workers can have a voice and win things to protect themselves and their jobs, hopefully that fighting back and that organizing could become one and the same," Farmer said. "I think that's a role we can play."

Other unions have also seen an uptick in inquiries from nonunion workers. Communications Workers of America organizing director Tom Smith described a "noticeable increase" in requests for help.

Like the Teamsters, the CWA has released resources for nonunion workers, including a template for demanding protections and an in-depth guide to their NLRA right to take concerted action. The group was "immediately inundated" with requests for advice after it released these tools, Smith said.

"Some of those have turned into union organizing drives," Smith said. "A lot of them were just instances where a worker and maybe some of their co-workers were able to exercise their rights and win immediate health and safety improvements."

The uptick in organizing interest has come during a period of increasing labor activism. More workers took part in large-scale work stoppages between 2018 and 2019 than in any other two-year period since the '80s, according to U.S. Department of Labor data that tracks protests involving 1,000 or more workers. Over 400,000 workers took part in large protests in each of those two years, compared to fewer than 100,000 in each of the five prior years, according to the DOL.

The activity comes at a time when private-sector union density in the U.S. has reached its lowest point in decades. Just over 6% of nongovernment workers were union members in 2019, DOL data shows, down from 9% two decades ago and about 30% at midcentury.

Coming after the recent surge in strikes, the pandemic has been "like a match to a haystack," said Service Employees International Union President Mary Kay Henry.

"I think the conditions are ripe for mass organizing," she said. The SEIU, which represents health care workers, janitors and other service workers, has heard from employees in several nonunion workplaces and organized a series of fast-food sector walkouts through its Fight for $15 organizing arm, Henry said.

Some employers are worried the crisis could lead to more organizing. Roger King, senior labor counsel for the HR Policy Association, said his group has held a series of calls on coronavirus-related issues with members, who are "basically the Fortune 400 companies." They're eyeing the unrest in retail, food, logistics and other sectors with concern, he said.

"Employers that are not taking this issue of safety in the workplace and communication seriously are going to be vulnerable" to a union drive, King said. But unions may not have as much success if businesses listen to their workers and explain their safety policies, he said.

The law, which saw its last substantial update in 1947, has not kept pace with the modern economy, said Farmer, the Teamsters organizing director. For example, the law excludes contract workers, who make up an increasing portion of the U.S. workforce, he said.

And the pandemic itself poses barriers to unionization, organizing officials told Law360. The typical organizing playbook calls for union supporters to drum up interest in organizing through face-to-face discussion with co-workers over long periods. These campaigns are hard enough to mount in ordinary conditions, and harder still when some workers are separated by cyberspace and others can't congregate because of distancing rules. And more immediate concerns such as safety may take precedence over forming a union.

But unions hope the one-off actions they support today will lay the foundation for organizing when the crisis slows, the CWA's Smith said.

"What we do know from every successful union election, it involves and is oftentimes led by people who have had those experiences and been changed," Smith said. "You can't put that genie back in the bottle."