Law360 (July 29, 2020, 5:32 PM EDT) -- A New York federal judge on Wednesday blocked the Trump administration from implementing its controversial wealth test for immigrants during the national health emergency stemming from the coronavirus pandemic. 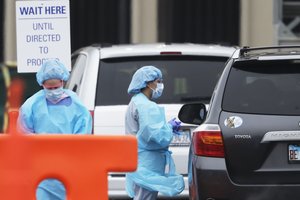 U.S. District Judge George Daniels said that the states and nonprofits challenging the so-called public charge rule, which would allow the government to deny green cards to immigrants found likely to need public benefits, had provided "ample evidence" that the policy deters immigrants from seeking COVID-19 testing and could threaten efforts to curb the spread of the disease.

"As a direct result of the rule, immigrants are forced to make an impossible choice between jeopardizing public health and personal safety or their immigration status," Judge Daniels wrote.

The judge also found that U.S. Citizenship and Immigration Services' efforts to address these concerns were "plainly insufficient." The agency's alert informing immigrants that any testing or treatment for coronavirus would not be counted against them is ambiguous and "further adds chaos and confusion," Judge Daniels said.

And while the challenge was brought by New York, Connecticut and Vermont, Judge Daniels held that the immigration rule should be halted nationwide.

"The effect of the rule's application should not depend on what side of the George Washington bridge between New York and New Jersey one fortuitously finds oneself," he said.

The rulings mark a major victory for the New York-led state coalition and immigrant advocacy groups, which renewed their efforts in a pair of combined cases to block the immigration rule as confirmed cases of COVID-19 rose in the U.S.

"Immigrants have been on the front lines fighting this pandemic from the start, and today's injunction will ensure they are not targeted for obtaining health coverage or other vital services as they continue to battle COVID-19," New York Attorney General Letitia James said in a statement.

A USCIS spokesperson said in a statement on Thursday that it is "currently reviewing the court's decision."

"USCIS will fully comply with the court's order and will be providing additional guidance," the spokesperson continued.

Critics of the rule have argued since it was first issued in August 2019 that it will discourage immigrants and mixed-status households from seeking out health care services for fear of immigration repercussions, threatening public health as a result.

Five federal judges, including Judge Daniels, have found that the public charge rule is likely illegal. Judge Daniels went so far as to call it "repugnant to the American Dream."

But early this year, as those legal battles waged on, the U.S. Supreme Court gave the Trump administration the green light to implement the immigration rule across the country while those legal challenges to the policy continued.

USCIS has enforced the rule in all 50 states since February, allowing the agency to evaluate a green card applicant's past usage of public assistance programs including food stamps and housing subsidies, as well as other factors such as age and health to determine whether the immigrant will likely become a "public charge" in the future.

When the coronavirus outbreak hit the U.S., New York and New York City, Connecticut and Vermont urged the high court to revisit the issue in light of the ongoing health threat. The justices declined to lift their stay on Judge Daniels' injunction in a brief order in April and punted the issue back to Judge Daniels' court.

If the federal government decides to appeal Judge Daniels' Wednesday order, it could pave the way for the justices to review the rule a third time.

Judge Daniels said Wednesday that while he is mindful of the Supreme Court's decision to permit implementation of the rule while lawsuits progressed, the high court did not have the opportunity to consider the effects of the coronavirus pandemic when it made that decision.

In the months since the Supreme Court paused his initial ruling against the public charge rule, the "irreparable harm and public interests that warrant an injunction have come into sharper focus," Judge Daniels said.

"What were previously theoretical harms have proven to be true. We no longer need to imagine the worst-case scenario; we are experiencing its dramatic effects in real time," he wrote. "Equitable relief has become nothing short of critical."

Javier H. Valdés, co-executive director at Make the Road New York, one of the organizations that challenged the rule at the lower court, said in a statement Wednesday that the public charge rule has "caused immense harm to our communities — harm that intensified, as our country is in the midst of a health crisis."

"We applaud the court's decision and will continue to fight to stop the Trump administration's reckless and inhumane attacks on immigrants," he said.

The state coalition is represented by the attorneys general of New York, Vermont and Connecticut and Corporation Counsel of the City of New York.

The organizations are represented by attorneys with Paul, Weiss, Rifkind, Wharton & Garrison, the Center for Constitutional Rights and the Legal Aid Society.

The federal government is represented by Keri L. Berman of the U.S. Department of Justice's Civil Division.

Update: This story has been updated with more details from the rulings and with comments from the parties.